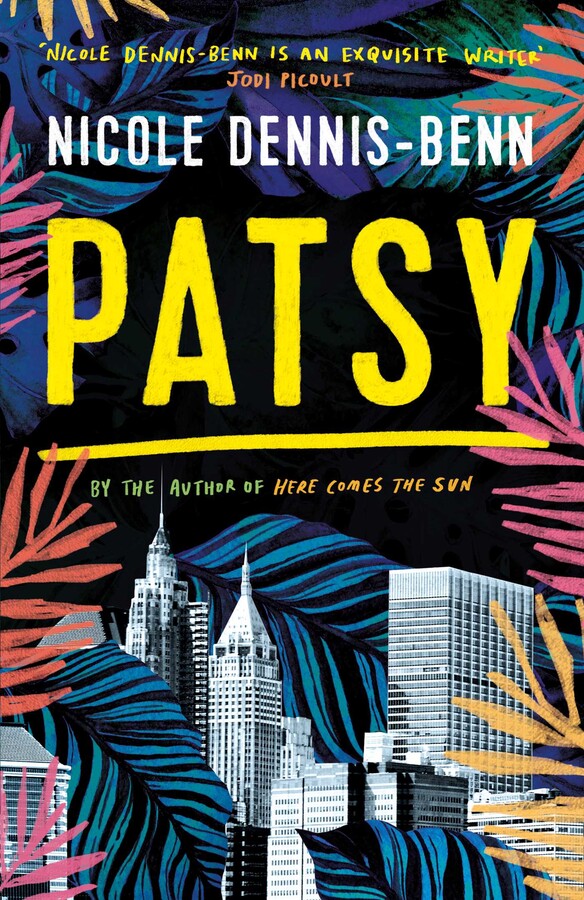 By Nicole Dennis-Benn
LIST PRICE £0.99
PRICE MAY VARY BY RETAILER

LONGLISTED FOR A PEN/FAULKNER AWARD 2020

Patsy yearns to escape the beautiful but impoverished Jamaican town where she was raised for a new life in New York and the chance to start afresh. Above all, she hopes to be reunited with her oldest friend, Cicely, and to rekindle their young love. But spreading her wings will come at a price: she must leave her five-year-old daughter, Tru, behind. And Patsy is soon confronted by the stark reality of life as an undocumented migrant in a hostile city.

Expertly evoking the jittery streets of New York and the languid rhythms and lilting patois of Jamaica, Patsy weaves between the lives of Patsy and Tru as mother and daughter ultimately find a way back to one another. Daring, tender and profound, this is the story of one woman's fight to discover her sense of self in a world that tries to define her, and of the lasting threads of love stretching across years and oceans.

‘Whether the novel’s characters are bonding or breaking, their interactions are described with grace and nuance… With renewed hostility to newcomers in the US and UK, the publication of Patsy feels perfectly timed.’

‘Get this book. Nicole Dennis-Benn is a treasure.’

– Nikesh Shukla, author of The One Who Wrote Destiny

‘Engrossing… Dennis-Benn has crafted a passionate, honest portrayal of freedom and motherhood.’

‘One of my favourite novels of 2017 was easily Nicole Dennis-Benn’s first novel, Here Comes the Sun, and when her second, Patsy, was announced, I almost lost my mind. The richness of Dennis-Benn’s writing is taken to another level in Patsy, the story of a Jamaican woman working towards her own version of the American dream... Dennis-Benn explores in such a textured, taut way what in love is gained, and what, or who, is left behind... Bliss.’

‘Enjoyable and constantly surprising... Alive to hardship yet never downbeat, this big, bustling odyssey offers a generous portrait of its mixed up cast.’

‘Sumptuous... If "queer" can refer not just to sexuality, but also to the act of turning something upside down, then Nicole Dennis-Benn, in her epic and gorgeous new novel, queers the immigrant saga. Patsy, her titular character, is complicated by her desires – for female love, for freedom from motherhood, for a second start in a new country – and Dennis-Benn renders the pains Patsy goes through to achieve those wants in dazzling technicolor.’

‘Patsy by Nicole Dennis-Benn is even better than her debut Here Comes the Sun... It's a heartbreaker but a heart mender, too... A satisfying read with no easy answers, but so much compassion.’

– Tayari Jones, author of An American Marriage, winner of the Women's Prize for Fiction

‘Patsy is a thoroughly absorbing saga of two female protagonists’ unstoppable determination to thrive, no matter what obstacles are placed in their way.’

‘Stunning... Though set in the past, the story and its reflections on borders and boundaries carry an urgent timeliness... There have been few narrative epics that effectively tally the emotional, logistical, physical, psychological and financial trials of the black female immigrant and mother or, likewise, the impact on the family of a black woman who dares transform herself. Dennis-Benn maps the internal terrain of black women yearning to be free — without romanticizing or ignoring their flaws... Patsy fills a literary void with compassion, complexity and tenderness.

‘A searing new take on immigration and what it means to be a mother. Passionate and urgent, Patsy explores what happens when a woman chooses herself over all else.’

‘In her new novel, Patsy, the writer tells an immigration story that defies conventions of motherhood and sexuality.’

‘Brilliant...a winning pick to help you escape reality... Dennis-Benn, a Jamaican immigrant herself, writes with keen awareness of what others experience living undocumented in America – and the compromises women make to prioritise themselves.’

‘Patsy is a book that'll make you reassess your own belief systems... It's brave and excellent reading.’

‘A novel that continually and subtly defies predictability as it tells a vital and remarkable life story… Again and again, Patsy surprises and illuminates.’

'Dennis-Benn has the uncanny ability to create characters that feel deeply, painfully real... A compulsively readable book that deftly grapples with maternal ambivalence.'

‘A moving examination of identity, sexuality, motherhood and immigration…the sort of book you can’t stop thinking about long after turning the last page.’

‘This novel is a layered portrait of motherhood, immigration and the sacrifices we make in the name of love.’

‘Nicole Dennis-Benn is an exquisite writer who paints scenes with words so vivid you might as well be walking through it as a character, not a reader.’

'A big-hearted slow burn of a novel that tackles the enormous themes of immigration, generational trauma, queerness, identity, poverty, class and race with a delicate touch... This is a stunning, empathetic rendering of a devastating clash between motherhood, selfhood and womanhood.'

‘Beautiful, shattering, and deeply affecting. Patsy’s story ultimately makes for a novel that is destined to endure.’

‘Dennis-Benn is a prodigious world-straddler, and not just geographically; her characters are memorable and fully drawn, and the devastating meta-legacies they conjure are all too real.’

‘[Patsy] lays waste to the privileged notion of having it all, an impossible pursuit when race, poverty and sexuality get in the way.’

‘Luminous... Patsy reminds us that it’s still radical for a young woman to pursue her own desires and ambitions and sexuality.’

‘Patsy is a portrait of black queer women grasping for self-determination, and a challenge to the conventions of what is expected of good mothers and good women and good immigrants. In writing beautifully about that unending struggle, Dennis-Benn finds a way to extend to black girls and women some of the love that the world may never offer.’

‘An emotional, sensual and complicated story.’

‘Gives voice to those usually voiceless... Not an easy read, but an illuminating one about life's most painful and difficult choices.’

‘A beautifully layered portrait of motherhood, immigration, and the sacrifices we make in the name of love from award-winning novelist Nicole Dennis-Benn.’

‘[A] heartbreaking, sensitive book that not only deftly demonstrates the impossible choices women must make in order to live the lives they want to live, but also exposes the specific hardships of immigrants in America.’

‘Patsy methodically and unapologetically engages with the choices women do and should be allowed to make, and…does so with nuance and grace… Ultimately, Patsy is a deeply queer, sensitive and vividly written novel about a woman’s right to want and a child’s right to carve her own path.’

‘When the title heroine of Dennis-Benn’s luminous second novel gets visa approval, she jumps at the chance to move to New York City, leaving behind all she knows of her home in Jamaica — including her 5-year-old daughter. Patsy reminds us that it’s still radical for a young woman to pursue her own desires and ambitions and sexuality. It’s a bittersweet meditation on ambivalent motherhood and personal satisfaction, as well as the assigned roles we would do anything to break away from, no matter what the cost.’

‘A complex examination of black queer women... A literary triumph.’

‘The title character of Dennis-Benn's new book is a Jamaican lesbian who arrives in Brooklyn in search of a new chapter, leaving behind an evangelical mother and a then five-year-old daughter. Alternating for more than a decade between Patsy and her daughter, who grapples with her mother's abandonment and her own sexuality in Jamaica, the novel interweaves life as an undocumented immigrant in America with questions about motherhood and freedom.’

‘Patsy is a thoughtful exploration of the immigrant experience, motherhood, and the choices women are forced to make.’

‘A powerful novel... Written in a way that feels immediate and vivid, Patsy is a novel that draws you in and gives a voice to questions of immigration, sexuality, and gender. It feels like a novel that will linger with you long after the last page.’

‘For a nuanced take on motherhood and identity, look no further than Patsy.’

‘One of the books I’m looking forward to reading this summer is Nicole Dennis-Benn’s Patsy… I admire how Dennis-Benn’s work grapples with multiple sources of displacement, mining the drama that emerges from the fundamental tension between social expectations, the requirements of survival and the need to respect and love our true selves.’

‘For all the pain caused and endured, Patsy, her family and the ones who love them persevere. Dennis-Benn doesn’t tie too fine a bow on it all—homophobia and racism are omnipresent threats—but she offers the reader some hope that good intentions can add up to something beautiful.’

‘This poignant new novel by Nicole Dennis-Benn...tells the story of Patsy, a woman who moves from Jamaica to Brooklyn, New York, in an attempt follow her dreams and put herself first. The journey she craves, however, challenges her in ways she never expected.’

‘Traversing generations and cultures, exposing white privilege and homophobia, exploring sexuality, the pressures of motherhood and the raw struggles of womanhood, Patsy’s plight...makes for a profoundly stirring and highly readable novel.’

‘Dennis-Benn builds big worlds inside and outside of her touchable characters, writing through their knotty love in all its failures and mercies in this empathic intergenerational epic of womanhood and inheritance.’

– Alexander Chee, author of How To Write an Autobiographical Novel

‘A novel that splits at the seams with yearning, elegantly written and deeply felt. Dennis-Benn leads the reader through Patsy's life with empathy and grace.’

‘Dennis-Benn uses her rich an illuminating storytelling to weave a narrative of two lives on the margins, both in Jamaica and America. At once enrapturing, heartbreaking and yearning… A literary novel with a heart of gold.’

‘Dennis-Benn has written a profound book about sexuality, gender, race, and immigration that speaks to the contemporary moment through the figure of a woman alive with passion and regret.’

‘This is a marvelous novel.’

‘An aching meditation on motherhood, sacrifice, and what it means to look truth in the face in order to fully become oneself. A beautiful book, as heartbreaking as it is restorative.’

– Cristina Henriquez, author of The Book of Unknown Americans

By Nicole Dennis-Benn
LIST PRICE £0.99
PRICE MAY VARY BY RETAILER