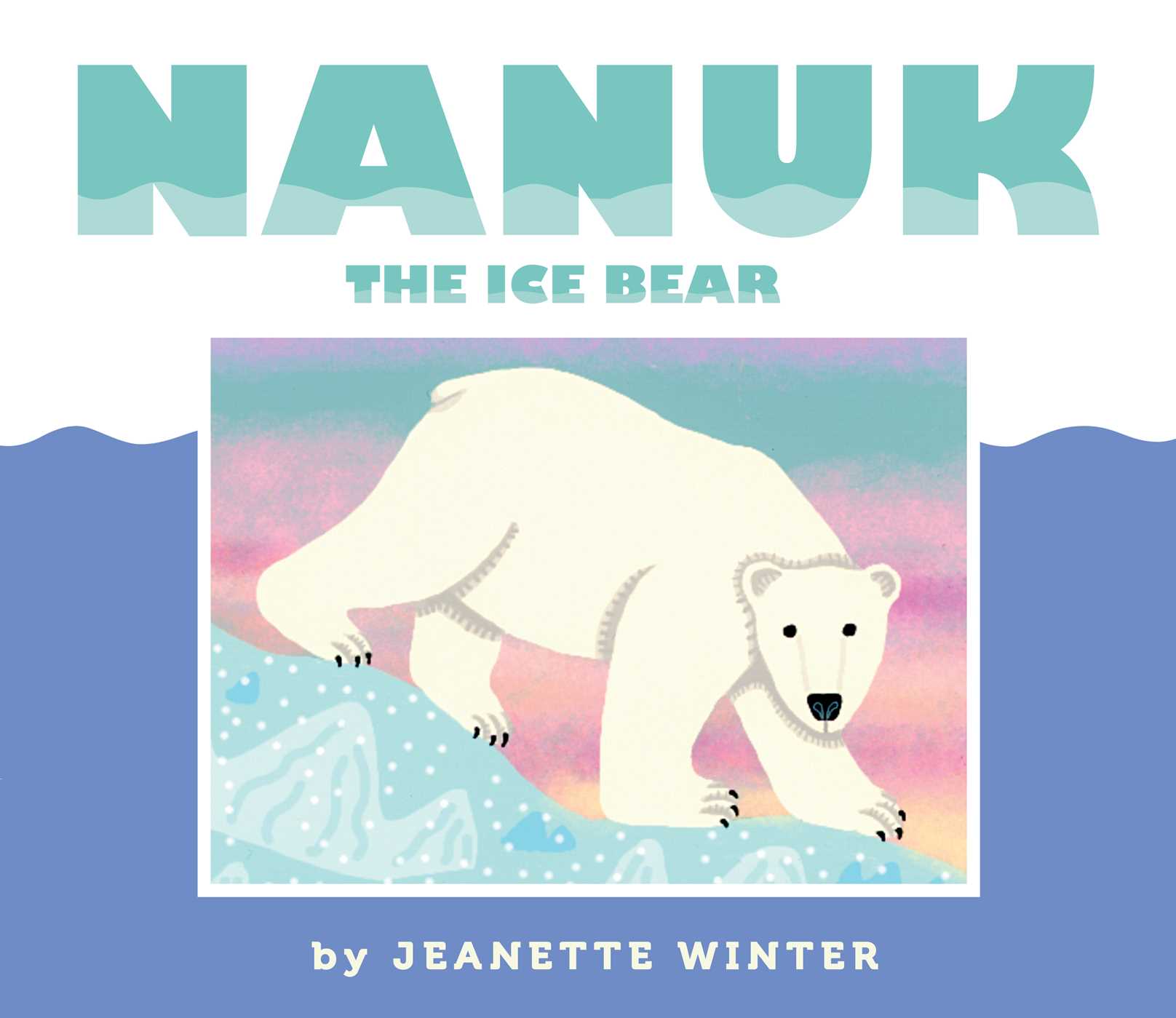 At the top of the world, Nanuk the ice bear hunts for food, meets a mate, and hibernates through the winter with her newborn cubs. When spring arrives, Nanuk teaches her beloved cubs how to hunt and swim and survive in the arctic. This new picture book by acclaimed author-illustrator Jeanette Winter is a stunning portrait of a loving polar bear family with a subtle environmental message.

The story of a femalepolar bear provides an overview of the species' life cycle and includes themention of environmental changes that threaten their existence. Clear, softillustrations in Winter's characteristic style accompany her straightforwardtext. She starts with several pages that describe the Arctic landscape,offering a sense of place and placement. Similarly simple sentences coverfeeding, mating ("a dance of courtship"), and the raising of cubs. Atouch of sentiment appears in the forlorn expression on Nanuk's face when heryoung are old enough to strike out on their own, but overall both narrative andpictures focus on conveying an accurate picture of typical experiences andbehaviors. Illustrations are centered on each page, bordered in white, whilebehind them a rising sea changes color and height in successive spreads,eventually engulfing the white space entirely. In the final pages the authormentions the changes that have been implied throughout by this changingbackground. Although she softens the grim prospect by ending with the positivefuture envisioned in Nanuk's dreams, the reality, however lightly limned,ultimately gives the story a melancholy tone. As in other books by the author,big issues are presented in an accessible manner and subtly enough that adultscan guide children to an age-appropriate understanding of them. (Picture book.5-8)

Winter(Mr. Cornell’s Dream Boxes) examines the life of Nanuk, a polar bear (or“ice bear,” as she refers to her), against a changing polar landscape. Shetints flat, folk-art-style images, set in small rectangular boxes, with thepale blues and greens of glaciers and ocean waters; the white backgrounds areslowly engulfed by ever-rising waves, an ominous visual indicator of thethreats facing Nanuk and her fellow animals. Winter explores the geography ofNanuk’s Arctic surroundings, following the bear as she hunts for food, meets amale bear, digs a den, sleeps, and gives birth to two cubs. She teaches thecubs to hunt; after a few years, they leave, and she is left alone once more.“The ice is melting. The sea is rising,” Winter writes. “Soon there will be noplace to hunt.” Winter closes with a description of Nanuk dreaming “of snowfalling and falling and freezing into ice.” The story is a memorable introductionto the issue of climate change for primary-school audiences, one that carries adistinct undercurrent of sadness.

Unassuming yet captivating illustrations set the mood in this picture book about a polar bear’s life. Each page is adorned with a bottom border of waves, which incrementally rise as the story continues, and the color scheme changes from pale blues to varying shades of purples and pinks. The action of the story takes place in center frames bordered in white and captures the isolation and beauty of this harsh environment.The story chronicles Nanuk’s life and her becoming a mother to two cubs. With interesting details about hunting habits and the creation of winter dens, the book is sure to please curious young readers. The ending includes a definite warning about climate change and offers some further reading on the topic. Winter has created a restful and beautifully illustrated book about polar bears. VERDICT-A sweet and mellow read that will have a large audience with its spare text and simple yet endearing illustrations.–Amy Nolan, St. Joseph Public Library, St. Joseph, MI

In this quiet story, polar bear Nanuk searches for food, finds a mate, gives birth to cubs, and watches them

grow up and go off on their own. What starts as a gentle tale about the life cycle of these bears turns

somber, however, as the final spreads indicate that the ice is melting, the sea is rising, and soon there will

be no place for Nanuk to hunt. The arctic environment is a perfect fit for Winter’s signature style,

encompassing spare scenes and minimal color; the use of blank space effectively creates a series of

portraits of Nanuk in her world. A strip of color, which starts at the bottom of the first page, rises higher as

the text continues, eventually covering the entire background and implying the encroaching sea. The final

pages do offer a glimmer of hope, suggesting the possibility of the return of the ice. Still, the brief text

leaves many questions, and inquisitive children will want answers—one of several reasons to share this

Nanuk the Ice Bear lives “at the top of the world.” Nanuk’s life is pretty standard, as far as polar bear existence goes: some hunting, finding a mate (as Winter calls it, “the dance of courtship”), hibernation. Eventually Nanuk gives birth

to cubs and shows them the ways of her “quiet white world.” But there is cause for concern in Nanuk’s changing environment: “The ice is melting. The sea is rising. Soon there will be no place to hunt.” The story ends with Nanuk dreaming a hopeful dream of a snowy future. Winter’s small-scale illustrations in her recognizable precise style appear in rectangular frames throughout. On the book’s first spread a sea-green wave floats subtly along the bottom of the pages; flipping through the book, the wave gets steadily higher. Eventually, as Nanuk’s homeland melts away, the entire background is a flood of ocean-hued blue, but the final spread reverses the pattern with a white wave along the bottom: an optimistic sign of a snowy future? Winter’s text, with its unapologetically environmentalist message, is written in simple, declarative sentences that generally start on the right hand side of the spread and continue on to the next page, making for a fluid, well-paced read....this is a thoughtful and thought provoking work.