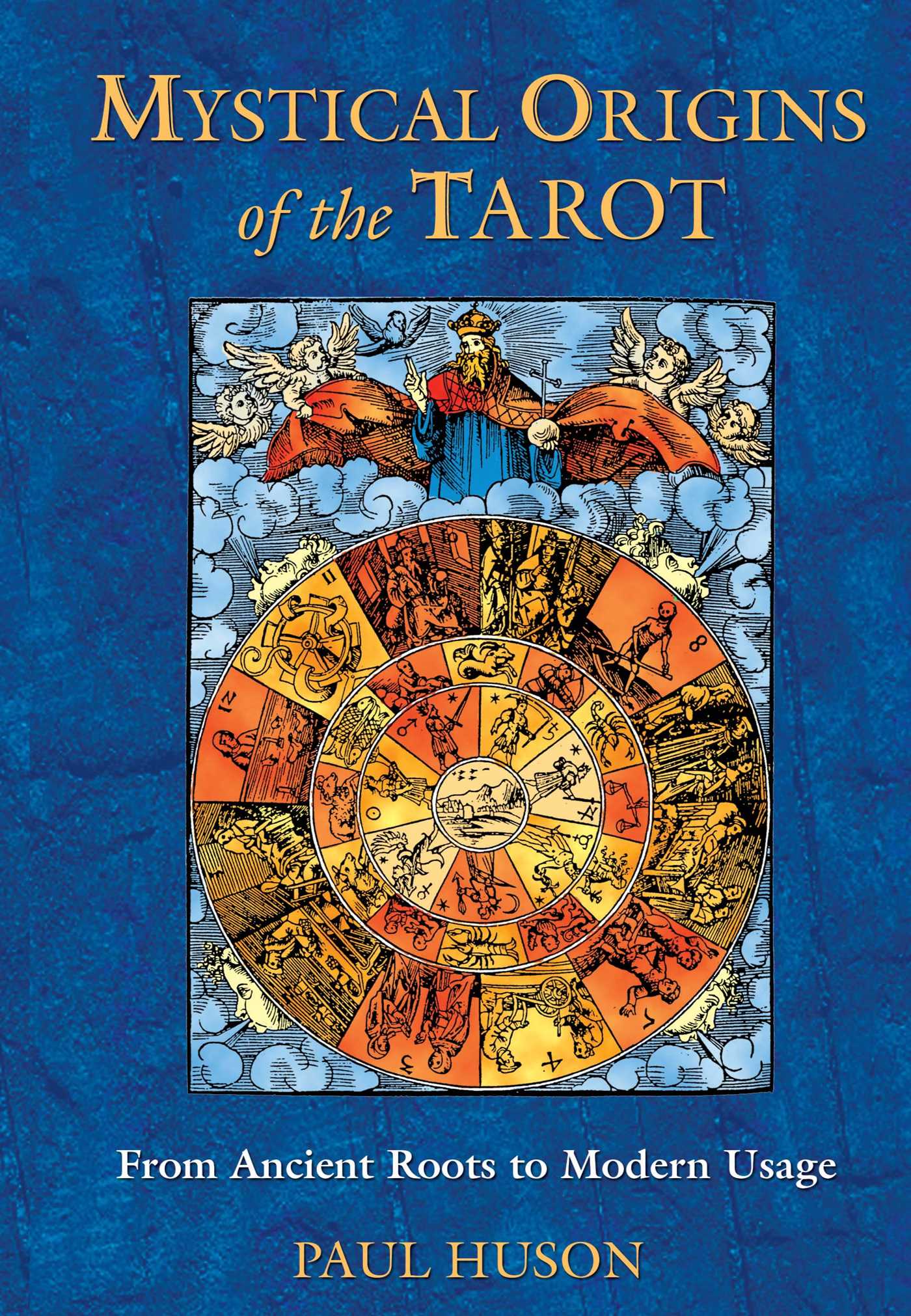 Mystical Origins of the Tarot

From Ancient Roots to Modern Usage

By Paul Huson
LIST PRICE £16.99
PRICE MAY VARY BY RETAILER

The origins of the tarot have been lost in the mists of time. Most scholars have guessed that its origins were in China, Egypt, or India. In Mystical Origins of the Tarot, Paul Huson has expertly tracked each symbol of the Minor Arcana to roots in ancient Persia and the Major Arcana Trump card images to the medieval world of mystery, miracle, and morality plays. A number of tarot historians have questioned the use of the tarot as a divination tool prior to the 18th century. But the author demonstrates that the symbolic meanings of the Major Arcana were evident from the time they were first employed in the mid-15th century in the popular divination practice of sortilege. He also reveals how the identities of the court cards in the Minor Arcana were derived from a blend of pagan and medieval sources that strongly influenced their interpretation in tarot divination. Mystical Origins of the Tarotprovides a thorough examination of the original historical source for each card and how the cards&#8217; divinatory meanings evolved from these symbols. Huson also provides concise and practical card-reading methods designed by the cartomancers of the 18th and 19th centuries and reveals the origins of the card interpretations promoted by the Hermetic Order of the Golden Dawn and A. E. Waite.

Chapter 2--The Origin of the Trumps

The Invention of the Trump Cards

It is my contention that whoever selected the original pictures for the tarot trumps used imagery drawn directly from mystery, miracle, and morality plays, most especially The Dance of Death. The popular culture origins of these images also lead me to believe that the trumps were mass-produced in "folk" decks before being custom-made by celebrated painters for noble families.

Alterations to the trump's designs would have provided added layers of relevance for the intellectual delight of the Viscontis, Estes, and other owners of the painted decks. These alterations included the omission of unpleasing references to hell in the form of the Devil and Tower trumps; the addition of allusions to Petrarch, Boccaccio, and Boethius; and the incorporation of a variety of devices pertaining to the aristocratic families who commissioned the cards manufacture, ranging from heraldic mottoes to the portrayals of family members themselves. These, however, I believe to have been based upon the original drama imagery of the printed folk decks.

If we set aside the Neoplatonic and literary glosses of the aristocratic, painted cards, the trumps basically provide an illustration of the soul's journey through life into the afterlife, an archetypal and perennial story recounted in Christian imagery typical of the late medieval period. A tale such as this, told at a time such as this, so soon after the catastrophic Black Death, and dealing with issues of eschatology, worldliness, fortune, death, salvation, and resurrection, would have been totally comprehensible to any card player of the late Middle Ages and early Renaissance. Viewed in this light, tarot trumps can certainly be said to fulfill the pronouncements of the fourteenth-century Dominican monk known to historians as Johannes von Rheinfelden that playing cards could be morally instructive.

We can be sure that the card makers and engravers responsible for each new generation of printed folk tarots would have felt at liberty to incorporate elements from any source that they felt supplied suitable reference material, provided its meaning remained intelligible to the local people. This practice would account for such idiosyncratic details as the zodiacal signs of the Crab and the Twins creeping on to the Moon and Sun trumps, and the similarity between tarot imagery and symbols shared by such early Renaissance block-books, house-books, almanacs, calendars, and horoscopes as those of the late fifteenth- and early sixteenth-century German engraver Erhard Schon.

But a question that has long baffled students of the tarot still remains unanswered. It goes to the heart of the very inscrutability of the cards that allowed them to become the pegs on which so many groundless fancies could be hung.

If the trumps did initially carry some kind of message or meaning, how is it that by 1550 that meaning had vanished, leaving the cards merely enigmatic pictures, tokens to play games with? The sixteenth-century Italian poet Flavio Alberti Lollio, who at that date published a tirade against the indignity of subjecting himself to the vicissitudes of gambling games in general and tarocco [Italian word for tarot] in particular, complained that the derivation of the word tarocco, and the images on the cards themselves, made no sense at all to him:

What else do they mean by the Juggler and the Fool, than swindler and trickster? What other meaning have the Popess, the Chariot, the Traitor, the Wheel, the Hunchback, Strength, the Star, the Sun, the Moon, Death and Hell, and all the rest of this motley crew? And that fantastic and bizarre name tarocco--is it without an etymology?

The answer to this puzzle may surely be found in the religious turmoil that began to ravage Europe during the sixteenth century. With the arrival of the Reformation--that rebellion against the hegemony of Roman Catholicism begun by Martin Luther--and the bitter internecine wars that followed, the religious drama of the pageants quite literally vanished in France, Italy, and England. The stories that the pageants told were, after all, originally intended as instruments of conversion to the Catholic faith and therefore highly suspect to the rising Protestant authorities. In 1548, in fact, all religious plays were banned by the Parliament of Paris. Under the patronage of the nobility, Italy now led the Humanist revival of interest in classical antiquity, which included the playwrights of Greece and Rome. The old religious dramas were banished from the minds of the educated as so much medieval rubbish, and with them went the knowledge of what the tarot trumps originally represented.

However, though the meanings of the trumps appear to have been largely forgotten by most of the card players who used them--they were, after all, only a card game initially--the symbolism undoubtedly would have continued to appear meaningful and potent to a few. In view of the churchís documented hostility toward what it perceived as blasphemous use of the trump images in gaming, apparently some of its ministers should be included among those who continued to discern the cards' symbolism. The Dominican preacher who castigates the use of dice, playing cards, and triumphs in the 1480 and 1500 document Sermones de ludo cum aliis fairly froths with rage when he declares that "nothing is so abhorrent to God as the game of triumphs," chiefly because it has the effrontery to depict the emperor, the pope, the Cardinal Virtues, planets and angels, even God himself, for its purposes (see Trump XXI, The World, to explain this last gripe).

And it would be particularly odd if such potent symbolism was dismissed as mere trivial decoration by others who also fancied they knew about such matters, but were not necessarily representatives of the Church, which really leads us to the subject matter of our next chapter, Cartomancy and the Tarot.
Paul Huson

Paul Huson has been a student of the tarot for over 40 years. He received initial esoteric training from the Society of the Inner Light in London and he later studied the methods of the Order of the Golden Dawn. He is the author of a number of books, including Mastering Witchcraft, in print for more than 30 years, The Devil’s Picturebook: The Compleat Guide to Tarot Cards, and Mystical Origins of the Tarot. He lives in Los Angeles.

“Thirty years ago, at the very start of the modern tarot renaissance, Paul Huson showed us how to uncover the mythical images and truths of the tarot. Now he has returned to incorporate modern scholarship into a visionary new concept for deciphering the mystery of the tarot’s origins and meaning.”

– Rachel Pollack, Seventy-Eight Degrees of Wisdom: A Book of Tarot

“Paul Huson brings to his quest for the origins of tarot the insight of an accomplished practitioner and the scholarship of a dedicated historical detective. The result is a fascinating ‘biography’ of the tarot images, tracking their shifting forms and attributions from their earliest appearances. Mystical Origins of the Tarot will undoubtedly be a classic in the field of tarot studies.”

– Robert Moss, author of Conscious Dreaming and Dreamgates and creator of the “Tarot for Dreamer

"Huson has produced the most enjoyable and fascinating history of the Tarot."

"For people interested in traditional cartomacy, this book is the best source we have in English. . ."

". . . a well researched, well written resource that allows [readers] to follow the origins and development of Tarot. . ."

"If you already have some knowledge of the various cards, and some experience in reading, you will find Huson's scholarly analysis and deconstruction of Tarot mythology invaluable."

"Mystical Origins of the Tarot is Huson's most solid work to date, and I highly recommend it to all serious students of tarot."

Mystical Origins of the Tarot

From Ancient Roots to Modern Usage

By Paul Huson
LIST PRICE £16.99
PRICE MAY VARY BY RETAILER