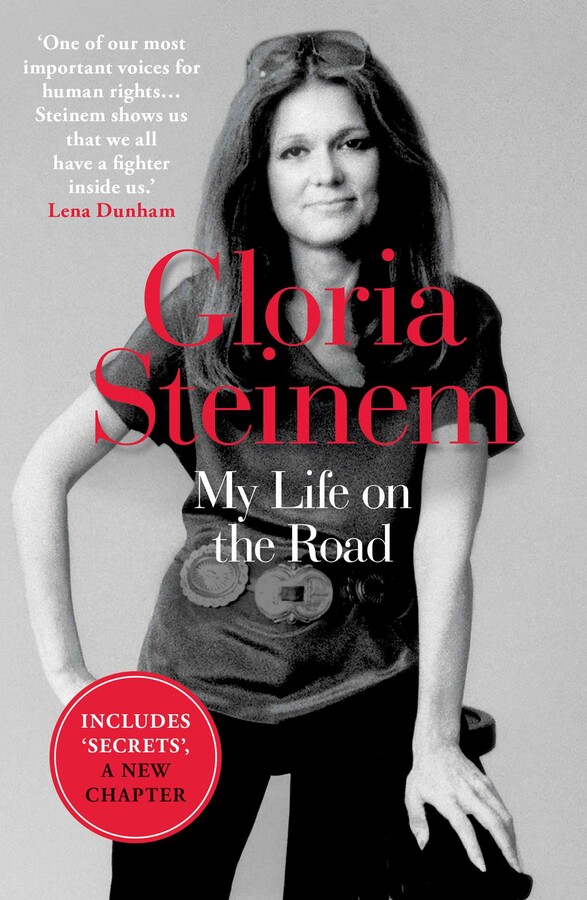 My Life on the Road

THE INSPIRATION BEHIND THE HIT BBC SERIES, MRS. AMERICA

Gloria Steinem had an itinerant childhood. Every fall, her father would pack the family into the car and they would drive across the country, in search of their next adventure. The seeds were planted: Steinem would spend much of her life on the road, as a journalist, organizer, activist, and speaker. In vivid stories that span an entire career, Steinem writes about her time on the campaign trail, from Bobby Kennedy to Hillary Clinton; her early exposure to social activism in India; organizing ground-up movements in America; the taxi drivers who were "vectors of modern myths" and the airline stewardesses who embraced feminism; and the infinite contrasts, the "surrealism in everyday life" that Steinem encountered as she travelled back and forth across the country. With the unique perspective of one of the greatest feminist icons of the 20th and 21st centuries, here is an inspiring, profound, enlightening memoir of one woman's life-long journey.

'Her inclusiveness and optimism in spite of all the challenges she has faced is a reflection of the longevity of feminism in all its many incarnations and an invitation for readers to get involved in the causes that mean the most to them'.

‘Unlike some, she has never recanted, changed sides, expressed regret or given up... as this book demonstrates, she is truer to herself and her causes than she has ever been.’

‘A spirited account... fascinating... the warmth and inclusiveness that characterises Steinem's accounts of the nascent activism of the early 60s is at once heartening and somewhat enviable... compellingly immediate... this geographical and intellectual adventuress here proves a thoughtful analyst of her own experiences, mistakes included; and an alert, inspiring chronicler.’

‘A personal, beautiful look at the deceptively radical act of travel and how it formed one of our most important voices for human rights…By delving deeper into her own thrilling story, Steinem shows us that we all have a fighter inside us.’

'There is not a minority whose cause she has not espoused, a person in need she has passed by in the street...what would the USA be without Gloria Steinem?'

'A lucid, lively history of the American feminist movement over the past half-century, and of the author herself...Steinem emerges as a champion listener with a phenomenal memory. The more personal detail is full of wonderful detail...a life very well lived, crammed with action, devoid of laziness and buoyed by humour and a capacity for wry self-criticism'.

'What a joy it is - a book of life, a book of travels, a seamless interweaving of her enduring message of equality for all laced through the story of her life'.

'A lightning rod to the head and heart -- stimulating, no, shocking us to get up out of our easy chairs, and do something meaningful with our lives...Women will read MY LIFE ON THE ROAD, but men must.'

'MY LIFE ON THE ROAD is filled with beautifully told stories of the people she has spoken with and listened to, been changed by, helped organize, got radicalized by, could get lost in, could get found in. It is soul material, human and political, funny and touching, deeply spiritual. I began it again the day after I finished.'

'Countless times, I had to put Gloria Steinem's new book down and allow an explosive truth she had just revealed to roll through me. And they all arrived—page after page—in the most personal, unexpected ways. I won’t be the same person after having read MY LIFE ON THE ROAD.'

'An inspiring work, a call for action, Steinem shares her life as a global freedom fighter, inviting readers to continue the journey -- and the struggle.'

'Gloria Steinem's lightness of being combined with complete seriousness, her love for words and her call for actions, remind us to celebrate her as one of the most important women of our time.'

'This is the book that sparked a thousand and one new fires under me and made me rethink the struggle for women’s equality in a new light. Steinem has never shied away from lifting up the stories of women whose differences to her own privileged position in life have meant reconfiguring the fight for equality. This book, at its core, is a deeply personal and beautiful tribute to them.'

– Onjali Q Raúf, author of The Boy at the Back of the Class

My Life on the Road