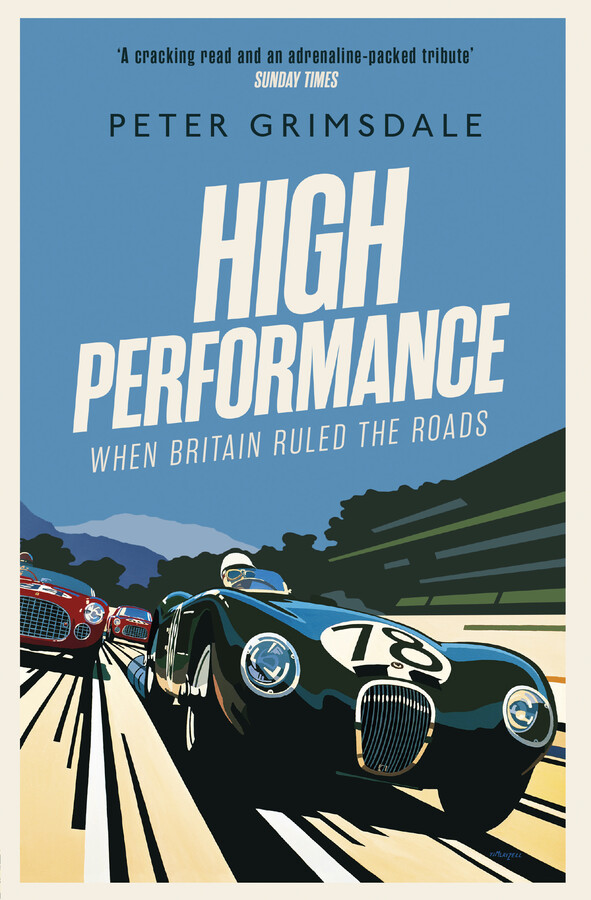 By Peter Grimsdale
LIST PRICE £9.99
PRICE MAY VARY BY RETAILER

‘A band of stubborn pioneers rose from the embers of Britain’s cities after the war and created the finest automobiles the world had ever seen... High Performance tells the exhilarating tale of their journey’ Ben Collins, bestselling author of How To Drive
‘High Performance is a cracking read and an adrenaline-packed tribute to the time when British mavericks “blew the bloody doors off” the competition’ Sunday Times

In January 1964, a team of tiny red and white Mini Coopers stunned the world by winning the legendary Monte Carlo Rally. It was a stellar year for British cars that culminated in Goldfinger breaking box office records and making James Bond’s Aston Martin DB5 the world’s most famous sports car.

By the sixties, on road, track and silver screen the Brits were the ones to beat, winning Formula One championships and capturing hearts. Designers like John Cooper, and Colin Chapman of Lotus, dismissed as mere ‘garagisti’ by Enzo Ferrari, grabbed all the prizes, while Alex Issigonis won a knighthood for his revolutionary Mini. The E Type Jaguar was feted as the world’s sexiest car and Land Rover the most durable.

But before the war only one British car had triumphed in a Grand Prix; Britain’s car builders were fiercely risk-averse. So what changed? To find out, Peter Grimsdale has gone in search of a generation of rebel creative spirits who emerged from railway arches and Nissen huts to tear up the rulebook with their revolutionary machines. Like the serial fugitives from the POW camps, they thrived on adversity, improvisation and sheer obstinate determination.

High Performance celebrates Britain’s automotive golden age and the mavericks who sketched them on the back of envelopes and garage floors, who fettled, bolted and welded them together and hammered the competition in the showroom, on the road and on the track – fuelled by contempt for convention.

Peter Grimsdale is a bestselling writer, TV producer and former commissioning editor whose credits stretch from Big Brother to Panorama, from The Adam & Joe Show to Finest Hour and Dispatches on Deepwater Horizon and Tony Blair's millions. His first motoring book was the critically acclaimed High Performance: When Britain Ruled the Roads. Racing in the Dark is his second book with Simon & Schuster.

‘A band of stubborn pioneers rose from the embers of Britain’s cities after World War Two and created the finest automobiles the world had ever seen. Without them, Bond would have eaten lead well before landing his hat on Moneypenny’s coat-stand, and Charlie Croker would never have blown the bloody doors off. Mini Cooper, E-Type Jag, Aston Martin — these classic marques dominated the roads and racetracks, endowed the Brits with sex appeal, and still work their magic today. High Performance tells the exhilarating tale of their journey down the fast lane.’

– Ben Collins, bestselling author of The Man In The White Suit and How To Drive

'I was gripped by this fascinating account of  Britain’s heyday as a world leader in the manufacture of motor-cars. Peter Grimsdale writes with the verve and style of a master story-teller.'

‘A wonderful glimpse "backstage" at the flamboyant mavericks and crazies who populated the British motor industry in the 60s.’

‘High Performance is a cracking read and an adrenaline-packed tribute to the time when British mavericks “blew the bloody doors off” the competition.’

'Peter Grimsdale gives a very different and uplifting slant to the story of ... the post-Second World War British Motor industry. He focuses on people who did things differently and whose achievements are with us still ... thoughtful and stimulating.'

By Peter Grimsdale
LIST PRICE £9.99
PRICE MAY VARY BY RETAILER