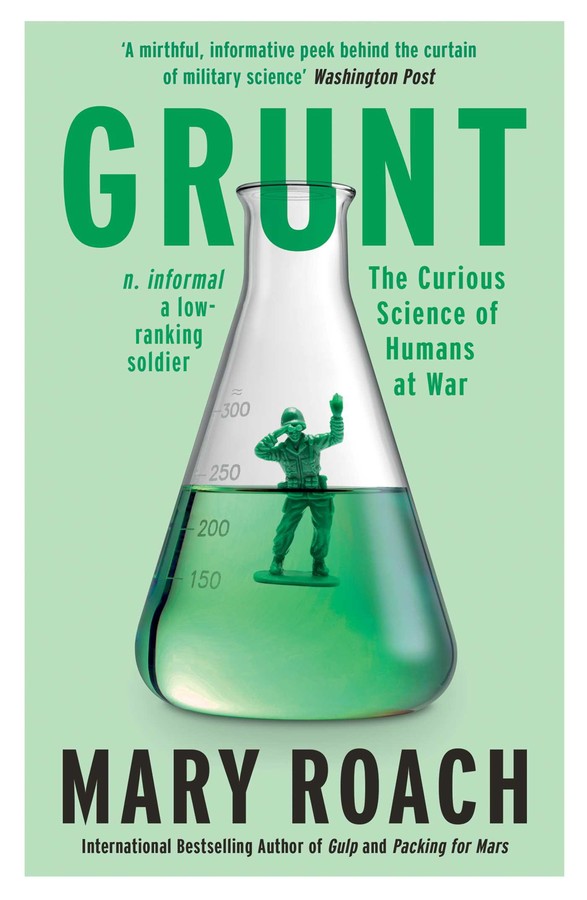 The Curious Science of Humans at War

‘The most entertaining writer in science’ – The Times, Books of the Year

War. Mention it and most of us think of history, of conflicts on foreign soil, of heroism and compromise, of strategy and weapons. But there’s a whole other side to the gruesome business of the battlefield.

In Grunt, the inimitable Mary Roach explores the science of keeping human beings intact, awake, sane, uninfected and uninfested in the bizarre and extreme circumstances of war. Setting about her task with infectious enthusiasm, she sniffs World War II stink bombs, tests earplugs in a simulated war zone and burns the midnight oil with the crew of a nuclear submarine. Speaking to the scientists and the soldiers, she learns about everything from life-changing medical procedures to innovations as esoteric as firing dead chickens at fighter jets. Engrossing, insightful and laugh-out-loud funny, this is an irresistible ride to the wilder shores of modern military life.

Mary Roach is the bestselling author of Stiff: The Curious Lives of Human Cadavers, Six Feet Over: Adventures in the Afterlife, Bonk: The Curious Coupling of Science and Sex, and Packing for Mars (978-1-85168-823-4). She has written for the Guardian, Wired, BBC Focus, GQ, and Vogue, among many others.

‘An absorbing tale that blends compassion and a bracing realpolitik into a fascinating account of one woman’s unquenchable will to not only survive but thrive.’

‘Roach [is] a gentle, highly original and exceptionally funny science writer…Grunt is an extraordinary piece of reporting…alive with stories and gobbets of trivia, many of them told for the first time.’

‘Sometimes you simply have to marvel at her ability to get behind the press release and into the laboratory…Completely fascinating.’

‘Takes a subject that we think we know a fair bit about…and hones in…where our knowledge is probably nil.’

‘Mary Roach is the Hunter S Thompson of science writing…[Grunt] proves again she is the most entertaining writer in science’.

– The Times, Books of the Year

'Roach has a strong stomach...but also a wicked wit'.

‘[A] quick-fire exploration of the extraordinary world of military science’.

‘Fascinating...The book is a treasure trove of unorthodox thinking and experimentation when faced with the challenge of war...Roach gives a memorable starting point into the topic that leaves readers wanting more.’

‘Roach’s prose is a triumph…A master of synthesis and scene, she unpacks subjects that on their surface might seem boring, disgusting, outrageous, emotionally charged, or morally suspect and infuses them with insight, humor, and humanity.’

‘The unflagging enthusiasm in her books, the raw happiness that bounces off the pages, isn’t the sort of thing that can be faked.’

‘Mostly…she plays things for laughs, and the raw material is irresistible. Take the guys who fire grocery-store chickens at jets on a runway (to study bird strikes). Or the astonishing World War II-era research into disseminating horrible stinks on a massive scale, as a way to demoralize enemy troops. Not to mention the blast-proof underwear.’

‘[Roach] approaches her craft with a curious mind and a humorous bent, translating high science into a highly enjoyable read.’

‘A must read for fans of Roach and for those who relish learning about the secret histories of everyday things.’

‘Roach joins Malcolm Gladwell and Steven Levitt in making a career of turning serious research on oddball subjects into bestsellers.’

‘Roach lightens the scene with her snarky sense of humour and sharp interviewing skills to make uptight military personnel loosen up and share entertaining anecdotes.’

‘Our most consistently entertaining science journalist wanders into the ‘corners and crannies’ of military technology. Roach goes where other writers wouldn’t dare (witness her classic take on cadavers, STIFF), here eyeing ‘the parts no one makes movies about—not the killing but the keeping alive.” And her search produces images-a kind of technopoetry-that are hard to forget; a cannon firing chickens into airplanes, urethra replacement surgery, a “brief history of stink bombs.”’

‘A mirthful, informative peek behind the curtain of military science.’

‘From the ever-illuminating author of Bonk and Stiff comes an examination of the science behind war. Even the tiniest minutiae count on the battlefield, and Roach leads us through her discoveries in her inimitable style.’

‘A rare literary bird, a bestselling science writer...Roach avidly and impishly infiltrates the world of military science...[she] is exuberantly and imaginatively informative and irreverently funny, but she is also in awe of the accomplished and committed military people she meets.’

‘She writes exquisitely about the excruciating while also displaying supreme attunement to the oddness of the subculture she’s writing about.’

‘Mary Roach is one of the best in the business of science writing...She takes readers on a tour of the scientists who attempt to conquer the panic, exhaustion, heat, and noise that plague modern soldiers.’

‘Nobody does weird science quite like [Roach], and this time, she takes on war. Though all her books look at the human body in extreme situations (sex! space! death!), this isn’t simply a blood-drenched affair. Instead, Roach looks at the unexpected things that take place behind the scenes.’

‘Extremely likeable…and quick with a quip….[Roach’s] skill is to draw out the good humour and honesty of both the subjects and practitioners of these white arts among the dark arts of war.’

‘Covering these topics and more, Roach has done a fascinating job of portraying unexpected, creative sides of military science.’

The Curious Science of Humans at War