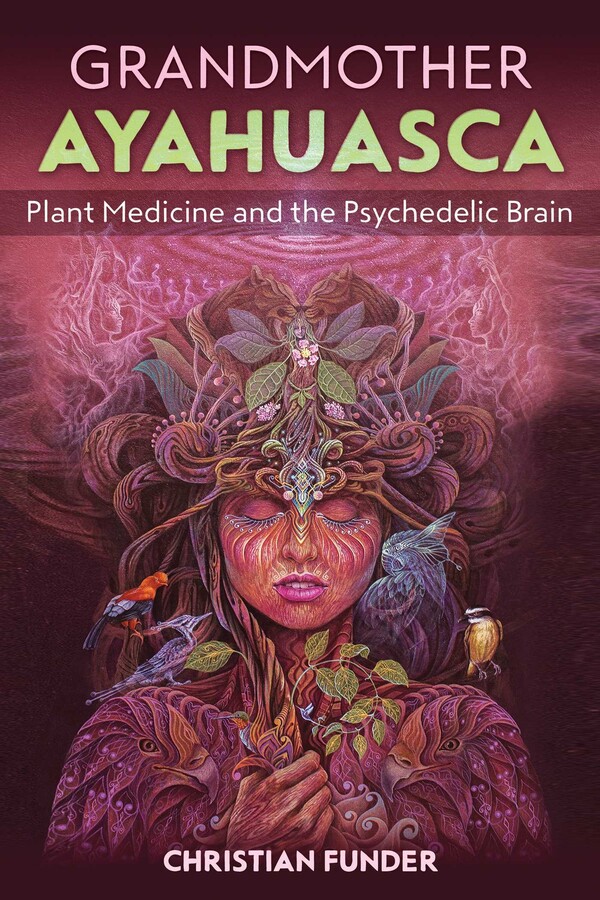 Plant Medicine and the Psychedelic Brain

Brewed from a combination of two plants--the leaves of Psychotria viridis and the vine stalks of Banisteriopsis caapi--ayahuasca has been used for millennia by indigenous tribes throughout the Upper Amazon for healing and spiritual exploration. The shamans of the Peruvian Amazon call the plant spirit within the vine Abuela Ayahuasca, Grandmother Ayahuasca.

Exploring the history, lore, traditional use, psychoactive effects, and current scientific studies, Christian Funder reveals how Grandmother Ayahuasca is a profound healer, wise teacher, and life-changing guide. Examining ayahuasca from a neuroscientific perspective, the author looks at recent research on the effects of DMT--one of the psychoactive compounds in ayahuasca--as well as fMRI studies of brain activity during altered states. He explores these fi ndings as they relate to the teachings on unified states of consciousness in ancient esoteric texts and to Aldous Huxley’s theory of psychedelics inhibiting the “reducing valve” mechanism of the brain.

Sharing interviews with people who have experienced ayahuasca’s powerful “spirit doctor” effects, Funder also details his own revolutionary ayahuasca healing journey from suicidal depression to a soul at peace. He explores ayahuasca’s relationship to indigenous Amazonian shamanism, including an inside look at the Shipibo tribe and the healing songs known as icaros.

Offering a holistic picture of ayahuasca--from science to spirit--the author shows that this venerated hallucinogenic tea has immense therapeutic potential and just might be the long-lost shamanic connection to the sacred Gaian mind.

From Chapter 3. The Psychedelic Brain

The experience of being lost in mind-wandering is something that makes up a considerable part of most human lives. If one is not busied with any immediate task that requires one’s undivided attention, the mind often begins to wander. Attention is drawn inwards and one becomes rather oblivious to the surrounding environment, hopping from one passing thought to the next.

Neuroscientific research has revealed that this mental behavior activates specific areas of the brain. These activated areas make up an interconnected group of brain structures which has come to be known as the default mode network (DMN). This network of brain regions seems to show less activity when one is performing a task, but higher levels of activity when one is awake, not involved in any specific exercise and left undirected to think to themselves. It is during these times that one often finds oneself engaged in internal monologue, daydreaming, recalling memories, envisioning the future and thinking about others.4 Default mode network activity is generally characterized by all the mental processes associated with spontaneous thinking without any explicit goal of thinking in mind. . . .

Several ayahuasca studies have been investigating its effect on human consciousness. In 2015 an experiment showed, as often found in trials with psilocybin, a “…significant decrease in activity through most parts of the DMN.”29 Another clinical research study with ayahuasca has been conducted by Jordi Riba and his research team. They hypothesized that insights and visions arise because more information is able to access consciousness than in normal waking consciousness, and their data confirmed this theory. As the ayahuasca dose increased the filtering brain mechanism decreased, and these decreases were statistically significant.30 This supports the notion that ayahuasca, like psilocybin, also allows this chaotic and interconnected state of cognition.

Recent research, however, has found something quite unique in an experiment with DMT. This experiment took place in November 2019 at the National Institute for Health Research Imperial Clinical Research Facility. The work was led by researchers from the recently developed Centre for Psychedelic Research in Imperial College, London. It was a placebo-controlled DMT research study overseen by David Nutt and conducted by Robin Carhart-Harris and Ph.D. candidate, Christopher Timmermann.(31)

Thirteen healthy volunteers were injected with intravenous DMT in a placebo-controlled trial, and their brain activity was measured with multivariate electroencephalography (EEG). Caps with electrodes were fitted on the head of the volunteers to measure the brain’s electrical activity before, during and after the infusion of DMT. Unlike oral ingestion of ayahuasca, the intravenous psychedelic experience is much shorter with the peak lasting approximately 10 minutes. The analysis revealed a significant suppression of alpha waves, which is the prominent electrical rhythm of the awake and resting human brain. They also found that the brain showed increased signal complexity and diversity. The normal hierarchical and ordered structure of the brain subsides, and brain activity thus becomes more chaotic and less predictable. As previously mentioned, both of these findings are consistent in neuroimaging research with psychedelics.

A third finding, however, was unique to this DMT-study. The most intense part of the experience was not only characterized by a significant drop in alpha waves, but an increase in delta and theta waves, and with a striking rhythmicity. Timmermann writes that this "delta-blip" may indicate the breakthrough experience of DMT: “. . . a perceptual mechanism by which the brain switches from the process of exogenously incoming information to a state in which processing is endogenously-driven, as in classic REM sleep dreaming.”(32) Timmermann and Carhart-Harris wrote in the final section of the study that this is only the first step along a fascinating road that may yield important insights into the relationship between brain activity and consciousness.

Delta and theta brain waves are, unlike alpha waves, slower and typically associated with dreaming and sleep, and have recently come to be associated with death experiences. In an EEG study published in PNAS, researchers observed a similar rhythmic surge of brain activity just moments before death.(33) It must be mentioned that the study was conducted on rats, not humans. In this study, the neuroscientists distinguish between four distinct stages of brain death. The second stage (CAS2) lasts about 6 seconds and ends with a burst in low-frequency delta brain waves, strikingly similar to the "delta-blip" of the DMT-study. In this stage, all other brain waves, except this one particular type of delta wave, almost flatlines. Main author of the article, Josipovic, writes that it is similar to the: “. . . highly lucid and realer-than-real mental experiences reported by near-death survivors.”(34)

If the data from this mouse experiment is compared with data from the DMT experiment, one will notice a stunning similarity in brain wave activity. The "delta-blip" of the human brain on DMT and that of the dying mouse seem to be scarily similar.

Perhaps it is not so odd that the indigenous Peruvian Amazonians call ayahuasca the "vine of the dead." Perhaps the DMT-experience somehow mimics the actual experience of dying. The Huichol tribe members believe that the shaman, through his shift in consciousness, can access what they call Nierika, which translates to "cosmic mirror," "passageway between worlds," or "face of deity," and thus bring back knowledge from the "other side." This doorway normally remains hidden until death, but the elected shaman is said to be able to access this door early to bring back knowledge and healing from the spirit world; a walking dead if you will. The Huichol is far from the only shamanic tribe with this belief of the shaman being able to access the "realm of the dead."
Christian Funder

Christian Funder is an English and mathematics teacher. After attending several ayahuasca retreats in the Peruvian jungle, he is now focused on reuniting humanity with the plant teachers. A board member of the Psychedelic Society of Denmark, he lives in Copenhagen, Denmark.

“Grandmother Ayahuasca is a unique and important contribution to the field of ayahuasca literature. It is far reaching and poetic in its approach to the mysteries of this powerful plant medicine. From mythology to philosophy to recent scientific studies, this book explores different perspectives and facets of the experience of ayahuasca and its healing potential. Funder is sensitive to how this plant is held in the indigenous world and respectful of the other worlds it opens.”

“Grandmother Ayahuasca is an excellent survey of the pharmacological, cultural, and transformational potential of this remarkable Amazonian potion. Funder provides a very accessible overview of this subject, informed by his personal revelations through direct engagement with this magical medicine. Highly recommended for students of this important cultural phenomenon and for those who intend to explore the jungle brew for themselves.”

– Julian Vayne, author of Getting Higher: The Manual of Psychedelic Ceremony

“Undergoing experiences with ayahuasca has become an increasingly popular activity in recent years. There is a wide variety of different opportunities to partake in this important practice. This excellent book by Christian Funder provides a valuable resource for the interested explorer. Funder impressively covers all aspects of ayahuasca--from the latest cutting-edge neuroscience to the spiritual and indigenous uses of this important medicine. I highly recommend it as a text for people from all fields and levels of interest.”

“From current neuroscience discoveries to traditional Amazonian lore--adding philosophical perspectives from the East and West, first-person accounts, and classic psychedelic quotations--Grandmother Ayahuasca integrates personal insights, scholarly depth, and neuroscience into a comprehensive compilation of ideas in a readable style that informs and entertains its readers.”

– Thomas B. Roberts, Ph.D., editor of Psychedelics and Spirituality

“An amazing book. Christian Funder provides a wide and profound exploration into the work of this master plant. Even if you think you know everything on this subject, you will discover there is more to learn in this book. Thank you, Christian, for this great contribution to the world of ayahuasca.”

Plant Medicine and the Psychedelic Brain