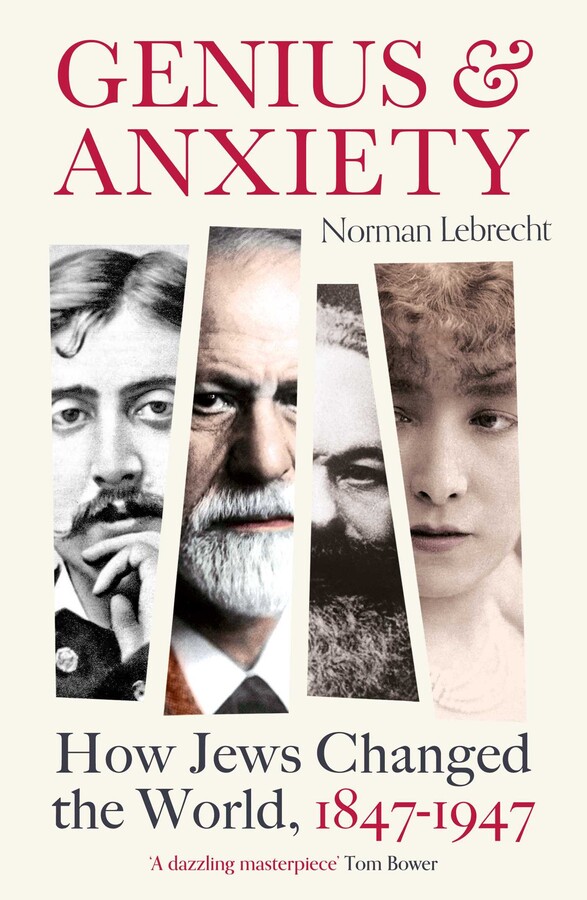 By Norman Lebrecht
LIST PRICE £6.99
PRICE MAY VARY BY RETAILER

Marx, Freud, Proust, Einstein, Bernhardt and Kafka. Between the middle of the nineteenth and twentieth centuries a few dozen men and women changed the way we see the world. But many have vanished from our collective memory despite their enduring importance in our daily lives. Without Karl Landsteiner, for instance, there would be no blood transfusions or major surgery. Without Paul Ehrlich no chemotherapy. Without Siegfried Marcus no motor car. Without Rosalind Franklin genetic science would look very different. Without Fritz Haber there would not be enough food to sustain life on earth.

These visionaries all have something in common – their Jewish origins and a gift for thinking outside the box.

In 1847 the Jewish people made up less than 0.25% of the world’s population, and yet they saw what others could not. How?

‘[Lebrecht] guides us through his chosen period… in a breathless present continuous, with an enthusiasm that holds the reader’s attention… Lebrecht’s passion is persuasive, while the depth and variety of his reading and the sweep of his writing consistently engage.’

‘Claims to have “changed the world” tend to be exaggerations, but Lebrecht’s subtitle…seems understated. The world wasn’t changed, it was remade, by the emancipation of Jews into public life that began in the 1840s…Narrated not by a straight-faced professional historian, but by a sprightly raconteur, with anecdotes and jokes, digressions and embellishments. Lebrecht piles them high in a ziggurat of enthusiasm for those “who changed the way we see the world”’.

‘A riveting, gossipy, action-packed, seam-bursting blast through 100 years of (mainly) European history…Lebrecht is an exuberant storyteller who ably brings these personalities to life…Impressively wide-ranging in scope and unflaggingly fascinating in detail.’

'[An] urgent and moving history.’

‘Norman Lebrecht has a rare ability to evoke the past with the immediacy of a good journalist, broadcaster, novelist or blogger… In his new book, a magnum opus of well over 400 pages, he brings his lifelong interests together.’

‘This is unapologetically a book about Jews – scores of Jews whose lives and achievements made a significant difference to the world. In themselves, their histories make for fascinating reading, but a deeper theme informs these absorbing biographical sketches… Fascinating’.

‘An exercise in boosterism… While Genius and Anxiety presents itself as a work of serious historical research, it is also laced with journalistic pizzazz.’

‘This book unapologetically celebrates Jewish genius by asking some piercing questions… the book is also a reminder that the unremitting antisemitism that contextualises Jewish genius has not disappeared.’

‘This book is a joy. Concise, vivid, well-written, in clear antithesis to banality… One not only enjoys the wealth of interesting facts and people, but is also delighted to be treated with many of [Lebrecht’s] aphoristic pearls… A vivid psychological study of Jewishness.'

– The Times of Israel

‘A dazzling masterpiece depicting the glory and tragedy of Europe’s most persecuted people.’

‘Lebrecht vividly portrays the tensions between success and discrimination, offering a timely reminder of what western civilisation owes to the Jews.’

– David Abulafia, Emeritus Professor of Mediterranean History, University of Cambridge, and author of The Great Sea

By Norman Lebrecht
LIST PRICE £6.99
PRICE MAY VARY BY RETAILER