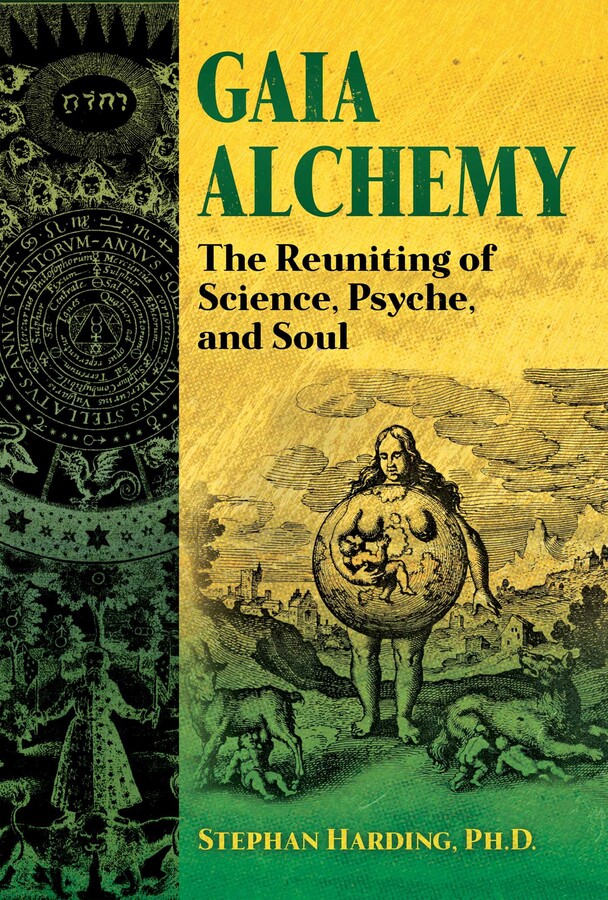 The Reuniting of Science, Psyche, and Soul

• Looks at how the four components of the living earth--biosphere, atmosphere, hydrosphere, and lithosphere--mesh with the four elements of alchemical theory and the four functions of consciousness as understood by depth psychology

During the scientific revolution, science and soul were drastically separated, propelling humanity into four centuries of scientific exploration based solely on empiricism and rationality. But, as scientist and ecologist Stephan Harding, Ph.D., demonstrates in detail, by reintegrating science with profound personal experiences of psyche and soul, we can reclaim our lost sacred wholeness and help heal ourselves and our planet.

Harding begins with compelling introductions to depth psychology, alchemy, and Gaia theory--the science of seeing the Earth as an intelligent, self-regulating system, a theory pioneered by his mentor James Lovelock. He then explores how alchemy, as understood through the depth psychology of C. G. Jung, offers us powerful methods of reuniting rationality and intuition, science and soul. He examines the integration of important alchemical engravings, including L’Azoth des Philosophes and the Rosarium Philosophorum, with Gaian science. He shows how the seven key alchemical operations in the Azoth image can help us develop deeply transformative experiences and insights into our interconnectedness with Gaia. He then looks at how the four components of the living Earth--biosphere, atmosphere, hydrosphere, and ­lithosphere--mesh not only with the four elements of alchemical theory but also with the four functions of consciousness from depth psychology.

Woven throughout with the author’s own experiences of Gaia alchemy, the book also offers guided meditations, shamanic practices, and contemplative exercises to open your receptivity to messages from the biosphere and help you develop your own Gaia alchemical way of life, full of wonder and healing.

From Chapter 5: The Unus Mundus: Gaia Archetype and Gaia Science

“The idea of the unus mundus is founded on the assumption that the multiplicity of the empirical world rests on an underlying unity, and that not two or more fundamentally different worlds exist side by side or are mingled with one another. Rather, everything divided and different belongs to one and the same world. […] … even the psychic world, which is so extraordinarily different from the physical world, does not have its roots outside the one cosmos [which] is evident from the undeniable fact that causal connections exist between the psyche and the body, which point to their underlying unitary nature.” --C.G. Jung, Collected Works, volume 14, para 767

Gaia alchemy heals the Cartesian split by making matter and psyche intensely aware of each other as an unbroken wholeness in the unus mundus. As fact and image meld within us, an integrated style of consciousness is born--an epiphany happens which combines our deeply buried indigenous soulful outlook with a modern mentality informed and shaped by the stunning discoveries of the contemporary sciences of the Earth.

In this book we explore how the opposites, science and alchemy, can be brought together to complete the sacred marriage between matter and psyche interrupted so long ago by the scientific revolution and the Church. The child of this inner marriage is the Gaian consciousness we must all quickly find before the split wipes out civilisation through climate change and the decimation of biodiversity.

But we are running out of time to celebrate the wedding, for a mutual recognition between opposites often happens slowly, sometimes only in a momentary flash when a marvellously freeing sense of the intensely purposeful aliveness of reality itself descends upon us like a valedictory blessing. In these blessed moments we experience the inner light of nature shining within us and in all things.

To do this we’ll follow the path of integrating two versions of Gaia: archetypal or mythological Gaia and scientific Gaia, which are Gaian opposites (Figure 5.1). When this happens we can experience a third, transcendent, Gaia which I call ‘alchemical Gaia’. Archetypal Gaia relates of course to the objective psyche (the collective unconscious), whilst scientific Gaia is based on James Lovelock’s Gaia theory. Alchemical Gaia requires the union of the two into a transcendent function in which the resulting state of affairs in consciousness is a blend of alchemy and science, transforming both into a deeply ecological style of consciousness lost to our culture so long ago but which is so deeply needed in this time of crisis.

Our thinking function only serves to hinder us in this domain. And yet this focus on an ancient style of perception brings us fairly and squarely into a world alive with birdsong, with swaying branches laden with the green shoots of spring and the clear blue sky of an English April morning, for me right here, right now as I write--a living world which science can help us to appreciate ever more fully.

The best person to introduce us to archetypal Gaia is my friend the mythologist, scholar, and Jungian analyst Jules Cashford, who in a only seventy-hree pages of her masterpiece ‘Gaia’ gives us a superb immersion into the depths of Imagination and this primordial manifestation of Gaia. Jules taught with James Lovelock on the very first course at Schumacher College which was on Gaia, where a motley group of exceptional people from all over the world explored Gaia as both science and myth, a happening which has blossomed for me some thirty years later into Gaia alchemy--into a new kind of science awake to the phenomenal power and presence of psyche in the world of nature.

Jules reminds us of William Blake’s famous saying: “To the Man of Imagination, Nature is Imagination itself.” But what is Imagination with a capital ‘I’? Poets evoke Imagination best of all. I am no poet, but here is an example of Imagination from my own experience. I close my eyes and remember the blue Mediterranean I saw in Greece long ago. An immense love comes over me, light in texture, full of an open, expansive longing which is somehow fulfilled by my memory of the sea itself with its turquoise waters and the clear blue sky above. The feeling expands into a lived realisation of the palpable existence of the entire planet as one miraculous, living, breathing being. Such ‘Imagination events’ have a particular quality--they reveal something absolutely real about the world as a substance which is both inward and outward simultaneously.

A Conversation with Jeffrey Kiehl

Jeffrey Kiehl: According to Jung, archetypes are the images of instincts, which are biological. They're probably the closest to Gaia. This is one of Jung’s great contributions: he felt that there's something in us that pulls us to the numinous, which is the religious function. In the Judeo Christian mythology you would say there is a natural instinct for us to want to connect to God. If you want to stay out of a particular religion you could say that there is a natural pull, a natural process that wants us to experience the transpersonal. The archetypes provide the images that facilitate that experience. The instincts are very organic - they are the product of evolution - they're the biological roots of psyche. The Self, as the archetype of wholeness, is the image of the instinctual religious function. Its purpose is to give us an experience of the transpersonal - a numinous experience.

Stephan Harding: So all this is rooted in matter?

JK: Yes. That’s why Jung said that the archetypes are rooted in the earth itself.

SH: So the religious instinct must be there in matter itself?

JK: That’s deep panpsychism, which is the insight that psyche is everywhere. Archetypes and instincts dwell in the psychoid realm which is even more primordial than psyche. Psyche and matter arise out of the psychoid. The psychoid marries psyche and matter. My proposal is that the whole thing rests in the Unus Mundus.
Stephan Harding

Stephan Harding, Ph.D., obtained his doctorate in behavioral ecology from Oxford University and is one of the founders of Schumacher College, where he is Deep Ecology Research Fellow and senior lecturer in holistic science. A student of James Lovelock, he has taught Gaia theory, deep ecology, and holistic science all over the world. The author of several books, including Animate Earth, he lives in Dartington, Devon, England.

The Reuniting of Science, Psyche, and Soul