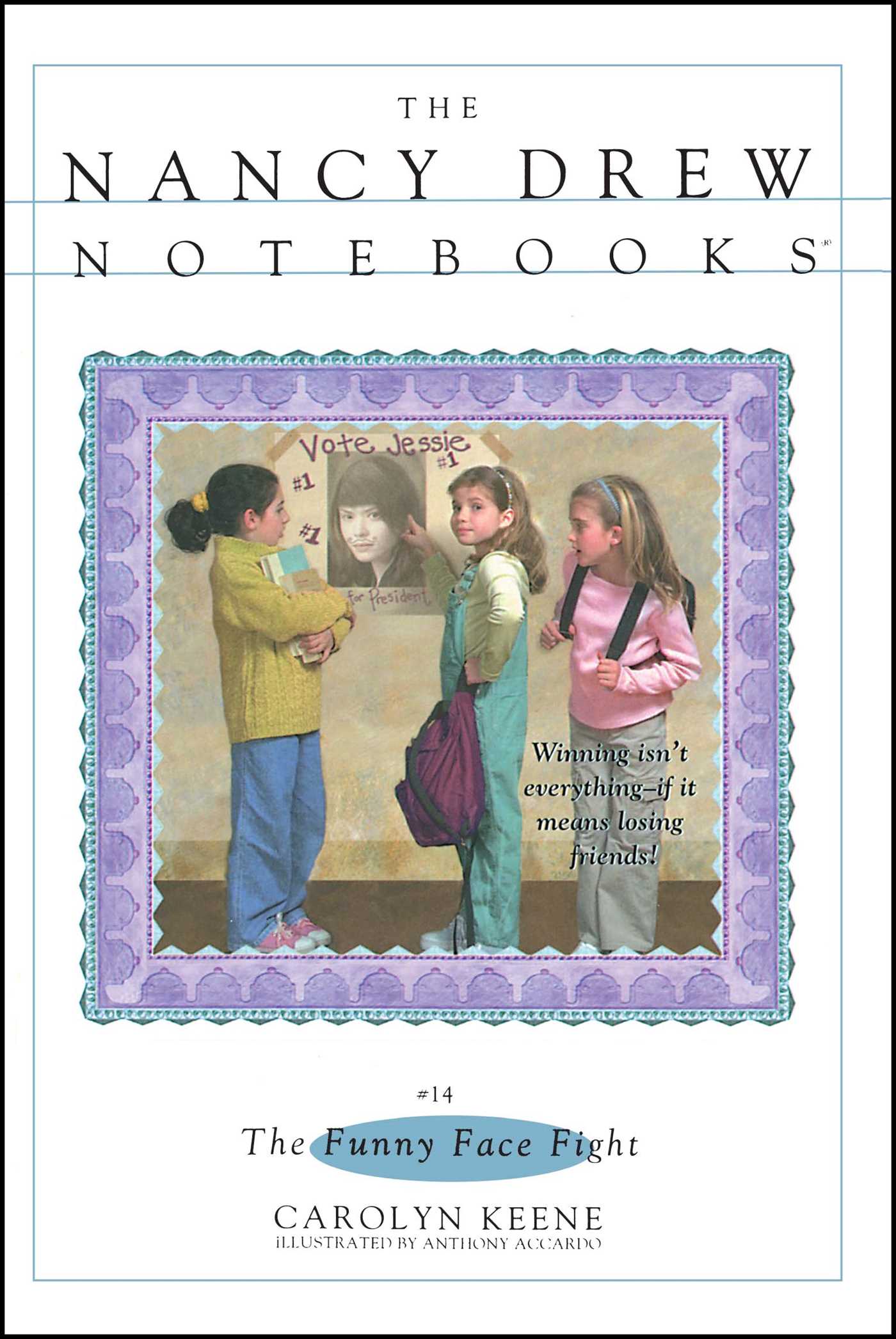 A FUNNY FACE IS NO JOKE!

The race is on for president of Nancy's class, and three kids are in the running: Vicki Wolf, Jessie Shapiro, and Mike Minelli. But taking sides seems to mean making enemies, and now someone's playing dirty.

Who put the silly mustache on the campaign poster? Nancy has to find out before election day because everybody's getting upset . . . and if everybody's mad, nobody wins!

The Race Is On

Jason and his best friend, Mike Minelli, cracked up laughing.

It was Monday. Mrs. Reynolds's third-grade class was getting ready to hold an election for class president. After recess they would nominate candidates. Then they would vote on Friday .

"You creeps!" Nancy shouted to them.

Molly shook her head. "They're mean."

"It's okay, Molly," Nancy said. "I don't want to be president anyway. Bess and George already asked me."

"Oh, come on, Nancy," Jenny said. "I'll nominate you. It will be neat to have a detective for class president."

"But the president has lots to do. Like helping with Fall Festival and class trips," Nancy said. "I already take ballet lessons and play soccer. I wouldn't have time to be president."

"Hey, Nancy, guess what?" Bess Marvin called from across the school yard. Bess was one of Nancy's best friends. Nancy went to join her.

"I'm going to nominate Jessie Shapiro for president. You'll help get her elected, won't you?"

Before Nancy could answer, George Fayne came over to them. George's real name was Georgia. Nobody called her that, though. She was Nancy's other best friend.

George and Bess were cousins. But they rarely agreed on anything. They didn't look alike either. Bess had long blond hair, and George had short, curly dark hair.

"I just asked Vicki Wolf if she wanted to be class president," George said. "And she said yes. Isn't that great?"

"What's so great about that?" Bess asked. "Vicki just joined the soccer team. She's on the town softball team, too. Isn't that enough?"

"That's the point," George told her. "Vicki's a great athlete. If she gets elected, she'll do a lot for sports, especially for the soccer team. "

George and Nancy both played on the third-grade soccer team -- the Tigers. Bess didn't.

"Well, if Jessie's elected," Bess said, "she'll do things for everybody, not just for soccer players. And you should have talked to us before you asked Vicki to run. We're your friends, aren't we?"

George looked surprised. "Of course, Bess. You guys are my best friends. But I still want Vicki to be president."

George turned to Nancy. "I'm. going to ask all the Tigers in our class to vote for Vicki. How about it, Nancy?"

Bess put her hand on Nancy's arm. "You'll vote for Jessie, won't you? Remember, I asked you first."

Nancy didn't know what to do. She liked both Vicki and Jessie. And George and Bess were both her best friends. Whatever she did, somebody's feelings might be hurt.

"Jessie has some super ideas," Bess added. "Like a class trip to Water World. Her dad knows the man who runs it."

"That sounds like fun, " Nancy said. "And Bess did ask me first. I guess I'll be on Jessie's side."

"Well, if that's the way you feel " George said. She turned and walked away.

"She'll be okay," Nancy told her. Just then a soccer ball came bouncing across the pavement. It hit Bess in the arm.

Nancy looked around. Vicki was standing nearby with her best friend, Lizzie Artello . George was with them now. All three of them were giggling.

"Sorry, Bess," Vicki called out. Bess tossed the ball to them. "I can't believe they hit me," she said to Nancy. "That was really mean. And George thought it was funny."

Bess was right, Nancy thought. If they hit Bess on purpose, that was mean.

After recess all the kids returned to the classroom and took their seats. Mrs. Reynolds stood in the front of the room.

Mrs. Reynolds used to be called Ms. Spencer. When she got married, she changed her name to Mrs. Reynolds.

"It's time for nominations, " Mrs . Reynolds said. "If there's someone you think should be class president, raise your hand and tell us who it is. Then someone else needs to second the nomination. May I see hands?"

"Does anyone second that nomination?" Mrs. Reynolds asked.

George turned and glanced at Bess. Then George raised her hand. "I second it."

Next, Bess nominated Jessie. Nancy raised her hand and said, "Me, too."

Then Jason spoke in a deep voice like a television announcer. "The one, the only, Mike Minelli!"

Everyone laughed. They all knew that Jason and Mike were best friends.

Peter DeSands jumped up. "I second Mike," he said loudly. "Not only that, I third and fourth him, too!"

"Now we're going to spend some time working on the stories you've been writing," Mrs. Reynolds continued. "The three candidates may work on their campaign speeches. We'll all get to hear the speeches on Thursday."

Nancy opened her English notebook. She had already finished a story about three friends who lived on the beach. Now she decided to write a story about her puppy, Chocolate Chip. Chip was a chocolate-colored Labrador retriever. At the top of the page Nancy wrote, "Chip and the Missing Bone." Then she drew two lines under the words.

What next? Nancy tried to think. It was always hard to start a story. She sat back and looked around the room.

Mike was chewing on his pen, and Jenny was staring at the chalkboard. Two rows ahead, Vicki was writing on index cards. She put them in a stack near the edge of her desk.

Bess got up from her seat and walked toward the dictionary stand next to Mrs. Reynolds's desk. As she passed Vicki's desk, she bumped against it. Vicki's stack of cards tumbled off the desktop and scattered across the floor.

"You did that on purpose, Bess Marvin," an angry voice said.

Nancy looked over her shoulder. Lizzie and Brenda Carlton had gotten up from their desks. They were standing behind Nancy. Brenda was writing in her red reporter's notebook.

Brenda wrote her own newspaper. It was called the Carlton News. She printed it on her father's computer. What Brenda liked most were stories that made other kids look bad.

George jumped up from her seat to look at the mess next to Vicki's desk.

Bess looked at George. But George didn't say anything.

"It was an accident," Bess said. Her voice almost cracked. "I didn't do it on purpose."

"You did, too," Lizzie said. Then she turned to Brenda. "Bess is trying to make Vicki lose," she said. "I know it!"
Carolyn Keene