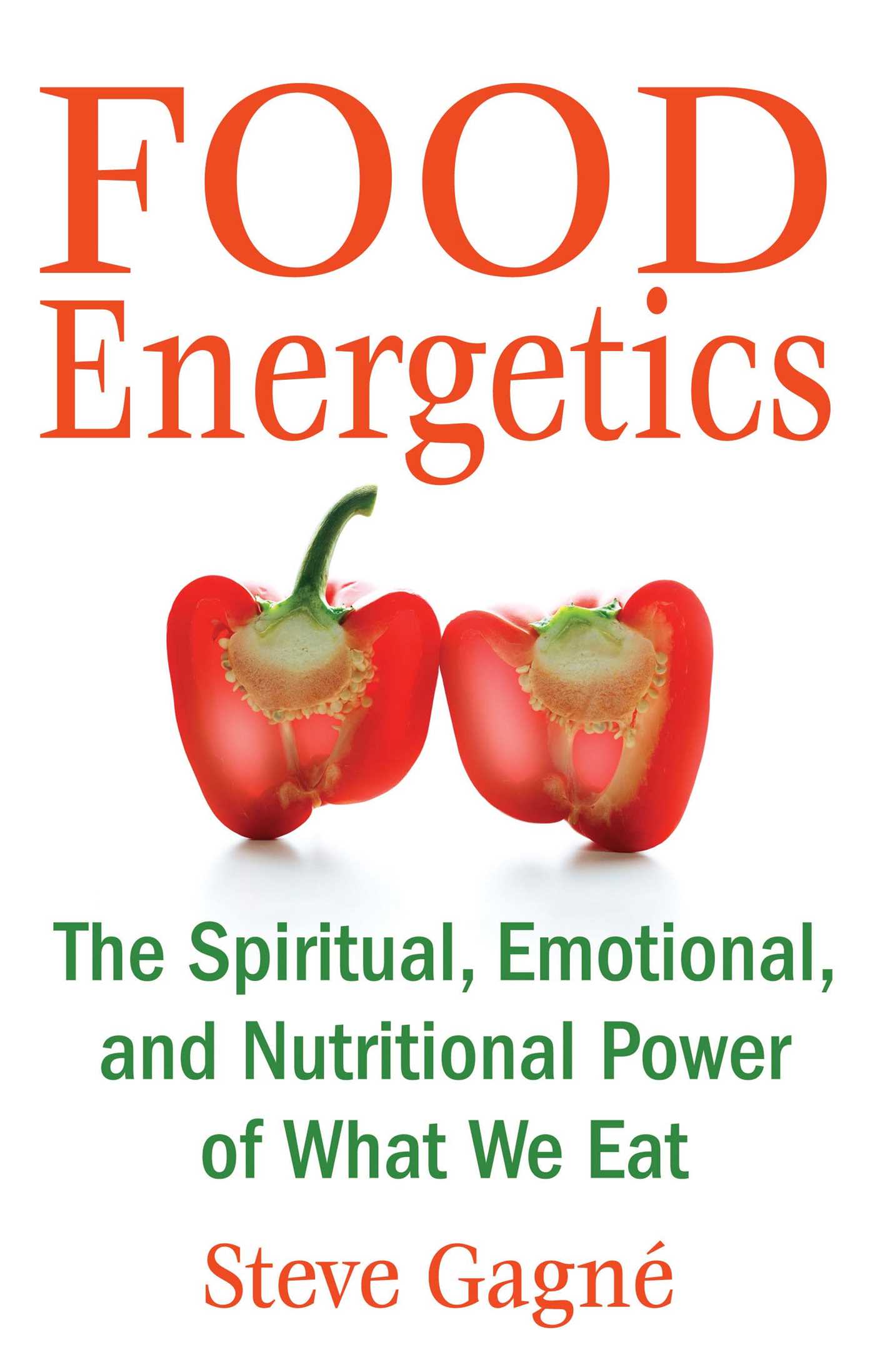 The Spiritual, Emotional, and Nutritional Power of What We Eat

• Offers an approach to diet from the perspective of ancient peoples, who understood how the energetic qualities of food affect both physical and spiritual health

• Includes a comprehensive catalog of the energetic properties of myriad foods--from chicken, beef, and potatoes to garlic, avocados, zucchini, and grapefruit

Food is more than simply fuel. It imparts a living wisdom that is beyond the science and mechanics of calories, grams, and nutrient values. Ancient peoples, through their relationships with the plants and animals providing their food, understood that their food conveyed the unique energetic qualities of its source, such as swiftness from wild deer and groundedness from root vegetables. With the rise of agribusiness and industrial food production, people have become disconnected from the sources of their food and are no longer able to register the subtle rhythms, harmony, and energies that food can convey. This separation has thrown the basic human-food relationship out of balance--to the detriment of human consciousness.

In Food Energetics, Steve Gagné shows how to revitalize our connection to food and remedy our physical and psychic imbalances with the wisdom of food energetics. He provides a comprehensive catalog of foods and their corresponding energetic properties and explains how each food affects us at the deepest spiritual level. By demonstrating how to plan meals that incorporate both dominant and compliant foods, he shows how to provide truly healthy cuisine that nourishes the body and the soul.

A Chicken in Every Pot

King Henry IV of France first coined this familiar phrase in the sixteenth century, a time when chicken was a luxury available only to the rich. Hank claimed he would make France so prosperous that on Sundays the food of the rich would appear in everyone’s kitchen. In 1928, America’s Republican party adopted “A chicken in every pot” as their slogan. And sure enough, since then, the chicken has become the most widely eaten meat in America.
The human/chicken relationship goes back thousands of years, with origins reportedly in India, although some historians say China. It all began with a feisty wild red jungle fowl, the ancestor of the Brahman, the Leghorn, the Jersey, the Rhode Island Red, and all the other modern varieties of chickens.
The wild red was originally found in forests gathered in groups of five to twelve birds. They lived in trees and ate small animals and various seed plants. At first, eating the wild red was thought barely worth the effort because the little bird had so little flesh, and what there was of it was tough and dry.
The domestication of this variety of chicken began about five thousand years ago. The wild red was first raised as a source of meat and only later for its eggs. Some contemporary varieties of chicken are exclusively meat birds, while others make superior egg layers. It is interesting to note that only two hundred years ago domestic chickens would lay from 6 to 12 eggs per year! By 1870 farmers had managed to increase production to 80 per year, and by 1950, to 120. Today, with modern methods, this figure has doubled.
Many people accustomed to eating factory-farmed chickens find the meat of natural free-running chickens exceedingly lean and not very succulent. However, those who prefer to eat the real thing find the lean, earthy flavor unmatched by any commercial wannabe.
When a food becomes as universally popular as the chicken has, it inevitably goes through some serious changes--and the chicken is no exception. The present-day, genetically altered, mass-produced version of the chicken has got to be one of the most lethal foods one can consume--in many ways, more lethal than factory-raised beef (its runner up in the animal food popularity contest). Let’s take a closer look at this most unusual creature’s energetic qualities and its connections to human psychology and physiology. Please note that while some of the descriptions that follow apply to the nature of chickens in general, most are specifically describing the genetically altered, factory-farmed chicken that graces our supermarkets and fast-food chains.

A New Breed of Bird

Chickens have vastly different eating patterns than humans and other animals, for a number of reasons. For one thing, they have a different digestive structure. They do not have teeth, nor do they have compartmentalized stomachs in which to digest their food. When they eat, food passes down into a narrow gizzard, where it is ground up for digestion.
The majority of chickens in America are housed in total confinement, and this results in boredom eating. These birds are generally incapable of making major distinctions concerning food and will eat just about anything they come across, much like many humans who consume excessive quantities of this mutated version of a chicken.
Factory-farmed chickens spend 75 percent (or more) of their time eating and drinking. Such an obsessive need to satisfy an oral fixation is often the result of malnutrition and lack of exercise and can energetically manifest in humans who eat these birds as hypoglycemia, overeating, a hyper metabolism, and constriction of the stomach, which in turn can show up emotionally as irritability and anger. Chickens tend to be noisy and nervous animals, especially when their food supply is limited.
Chickens will peck instinctively at anything and are particularly fond of shiny objects like gold and silver. You don’t happen to know anyone who has this kind of obsessive attraction to these objects, do you? Could this have to do with frequent visits to fast-food chicken establishments? Chickens also have a habit of scratching and clawing the ground in search of food. These traits can manifest in humans as agitation and obsession.
Confined chickens become carnivorous animals;when overcrowded or bored, they frequently resort to cannibalism. They have a strong attraction to blood, and when blood is drawn from one bird (which often results from feather-picking by one or more chickens), the whole flock will often pick each other apart in a frenzy. This alarmingly aggressive behavior has become so common in factory-raised chickens that it has led to debeaking, a process of trimming the beaks with machines.
Chickens also have a tendency to eat their own eggs or the eggs of other unwittingly broody hens. In fact, self-mutilation is common among confined chickens: they often pick at themselves aggressively and then, at the sight of their own blood, begin literally to destroy themselves.
These cannibalistic qualities manifest in humans as food indulgences and compulsive eating disorders, where anything and everything in sight is gobbled down in a vain attempt to satisfy emotional needs or physical malnutrition. Cannibalism and self-mutilation also energetically manifest in human emotions and can show up in behavior as either a person who avoids intimate relationships for lack of self-trust and fear of being abused or as a person who willingly indulges in abusive relationships in which he or she dominates or is dominated by another.
Other qualities derived from these captive pseudobirds’ bizarre behavioral patterns can include poor self-image, anorexia, emotional instability, and utter disregard for taking care of one’s appearance and health. These can in turn lead to further self-destructive patterns on many levels.
Isn’t it amazing how one food, altered from its original form, can so strongly affect our psychophysical nature? And here is the really fascinating part of it all: for the most part, psychologists don’t even consider our daily food an influential factor in our psychology!
Steve Gagné

Steve Gagné is a natural health and nutrition counselor who began researching and teaching food energetics in 1972. He teaches throughout the United States and Europe and continues to study traditional cultures and their dietary practices in remote parts of the world. He lives in Colorado.

“Food Energetics is a comprehensive, easy-to-understand, and absolutely essential explanation of the spiritual dimensions of food. If you believe in the concept of living things having a soul, this book describes the soul qualities in all of our foods. Here is the ultimate explanation of the term soul food.”

“Nobody understands the power, magic, and impact of food better than Steve Gagné. Prepare to read, eat, and be transformed!”

“This book is exceptional in the field of diet today. Steve Gagné’s deep, informed perspective helps elucidate the thoughts of Michael Pollan and gives us access to a simple, user-friendly way of understanding food.”

“One of the most important insights for anyone who has personally experienced the diet/disease, diet/symptom connection is the awareness of inevitable food diet dogma--meaning, the initial tendency for any student of natural health to create fairly hardedged principles around what is Right Food and Wrong Food and believe them as incontrovertibly true for the rest of their life and for all of humanity. Generally at that moment, a student of natural health will join one of the groups that best fit those beliefs, be it the All Raw group, or Vegetarianism, or Macrobiotic/Vegan/ Natural Hygiene/Paleolithic or any other of the well-known food philosophies. Gagné gently helps dislodge this dogma and gets us to see a wider view of what food is, what it isn’t, and how it has been used by healthy cultures throughout the world to heal and stay healthy. Whether you are just waking up to the realization that most of your symptoms are diet related or are an old salt in the study of the food and health connection, Food Energetics is simply a must-have book.”

The Spiritual, Emotional, and Nutritional Power of What We Eat