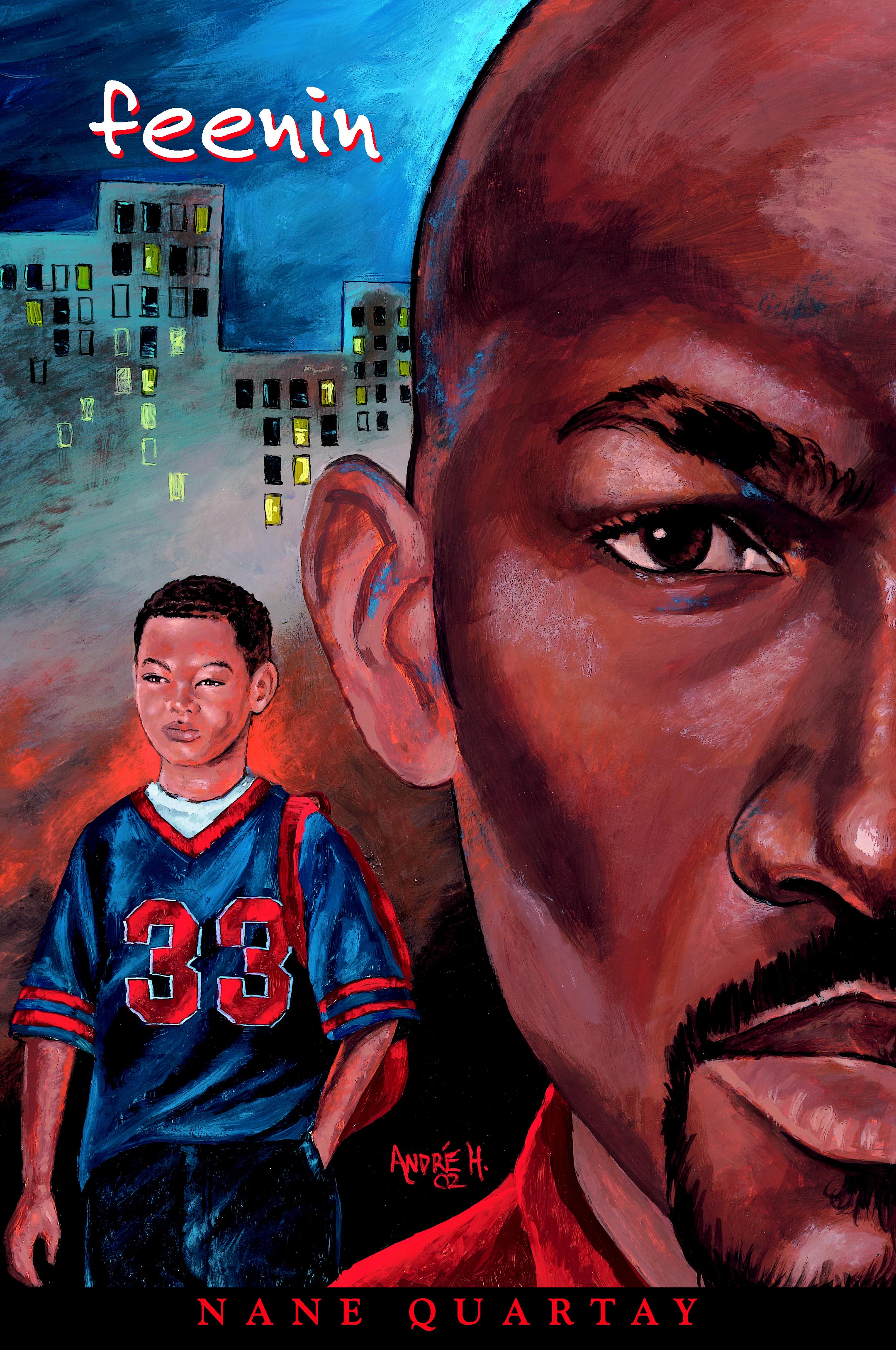 By Nane Quartay
LIST PRICE £11.99
PRICE MAY VARY BY RETAILER

Two powerful personalities are on a collision course in this rocket-fast novel about money, power, and survival.

Coming from a painful childhood that left him on the streets, Tokus Stone is a self-made man—to survive the streets, Tokus became a street hustler, selling drugs to make ends meet while envisioning a future without crime. This vision seems to become a reality—until his past catches up with him.

Now he is a man caught between what he knows and what he knows is right, between the fortune of crime and the conviction of law. Way Jalon, on the other side of the spectrum, rules the city with an iron fist, presiding over an empire of wealth and influence. Armed with a dangerous new secret, he vows to remake the fabric of society by his own standards—and Tokus Stone will be his perfect gamble.

This edge-of-your-seat novel traces the lives of a street hustler and an affluent businessman from their sharply contrasting paths to their final confrontation—a confrontation only one of them will survive.

Chapter One: Mistress of IT

She stood, deliriously trembling, at the entrance to the park. The young girl searched frantically; her addiction screamed out for satisfaction and her flesh moved in chronic surrender. Long gone were the days when drug use was recreational fun, a fad. Times were now hard-core bouts of having and not having, getting and getting got over, even worse, acts that were once theatric drama were now hellish scenes in which she starred. Control of her life had been violently wrested from her and abused by a blizzard of white powder that enslaved her mind and spirit. Yet she loved her master. Her deeds were the proof. So she searched, following a voice only she could hear. The call of yearning.

She had to feed It. It was her habit. A greedy insatiable monster who stomped across the landscape of her soul. It talked to her often. It knew where the drugs were and was well versed in all the ingenious ways in which to procure the precious substance.

The park loomed before her, threatening in the darkness of the late hour, sinister in its rolling, grassy slopes. An alarm went off somewhere in her mind, warning of danger, but that was drowned out by the thunder of It.

"Go," It said and she obediently shuffled down the man-made pathway as It grew heavy with urgency. The sights of the park held no interest to her. The beauty of nature's multicolored leaves of the tall trees, the picturesque shores on either side of the Hudson River were a mere blur, as she set about her mission. She passed the small, outdoor amphitheater with hillside seating and the area known as The Shade, where tall trees stood with their leaves clasping together overhead, casting cool, shadowed refuge during the burning midday hours. The park was deserted -- not a soul was in sight -- but It guided her. She blindly obeyed. A monument saluting the Buffalo Soldiers was around the bend, hidden from her side of the path by the sloping land. The statue was huge. One soldier stood tall, rifle at the ready, while another kneeled to help a fallen comrade. This part of history meant nothing to her. It only had eyes for the three men who leaned against the tall, stone wall encrypted with the story of the all-black regiment known as the Buffalo Soldiers.

"Look!" It exclaimed as she rounded the curved pathway. She saw a light-skinned man with a big nose put a crack pipe to his lips. Reflexively, she inhaled with him and It pinpricked her brain with a glimpse of false euphoria. She put on her best sexy, crack smile and floated over to where the men stood between the soldiers and the wall.

so the rock will last.

A dark-skinned man had the pipe. He took two hits and passed the pipe when he spotted the girl approaching.

"H-h-hold up! Waitaminute!" one of the men stuttered, looking the girl over. He recognized the type. "W-w-we got us a trick baby here. Y-y-you out here trickin', baby girl? Huh?"

The big-nosed man broke out with another rhyme:

All men are created equal.

They created crack and AIDS.

Got the public thinkin'

These are things that Black folks made.

"Give me some," she said seductively.

"Yeah. You out here trickin'," the man said.

"That's cause you smokin' that shit!" the dark man said. "You don't need no orgasm cause in your brain you already done got off. Skeeted ever' which-a-way!" He turned back to the girl. She could feel It agitating her. The hunger in her eyes was deepening. Her skin...her blood cried out for cocaine.

The dark man pulled a pebble-sized rock of crack cocaine out of his pocket. It's heart skipped a beat.

"You want some?" the dark man asked. She nodded her assent, mute with It.

"I give you some...if you take all your clothes off."

"No!" she shouted without consulting with It.

"No! No! Hell no!" she sang. It got angry. It was real ugly when provoked.

"Let me show you something," It said and began flashing scenes across her mind. Scenes from another time, another life. She was on her knees in the back seat of an old abandoned car with three teenaged boys. She'd spit them out the window. Then a German shepherd hunched over her, the dog's paws on her back, its hot breath on her neck. A group of men stood around watching, drinking beer and laughing at the girl who would do anything to get high.

"You will," It said and suddenly she felt the call of cocaine pulling, tearing at every fiber of her being.

"We outside," she said to the man, fighting It.

"Ain't nobody out here but us," the man and It replied in unison. Slowly, she looked around the park. In the thick stillness, she felt eyes everywhere. But there were no other people, not a one.

"Here," the dark man replied, mirthfully. He leaned back against the stone wall with a knowing look.

"Go ahead," It said. "Do it. Now!" A blinding high pushed through her flesh, beamed directly into her brain that sent her mind on a spinning, flashing plateau that was miles above the cosmic reach of common thought, a teasing glimpse that quickly dissipated. She sobbed aloud and with trembling fingers, she peeled off her dirty, ripped shirt, exposing the holey, rusty bra underneath.

"Yeah!" It shouted. The three men smoked as they watched, eyeing her small pointy breasts as she removed her bra.

"The rest," said the dark man, wisps of smoke escaping from his lips. She stepped out of her pants and stood naked before them. She extended her arm, palm outward, seeking payment.

"You said naked," she cried.

"I know what I said!" he barked. "But let me see you crawl. Crawl to me. On your hands and knees. But sexy though! Like on TV," he finished. It brought her to her knees. She was openly crying now, and she began to crawl.

Her sobs were alarming as she fought It. Cries of pain racked her body and she shook with the effort of trying to control herself-to lift herself from her knees, get up, get dressed and escape. She was fed up. It surged to life in response, shocking her with the overpowering need for crack, but she had reached the point of emotional saturation. She collapsed in a heap, mourning her searing desires and the pain It had wrought. The agony of living the white lie.

"She buggin' out," the big-nose said.

"Yeah," said the dark man with a mischievous grin. "Let's take her clothes." The three men gathered up her clothes and ran, laughing with chemical glee, leaving her naked and alone in the park.

Tokus was taking the shortcut to Heath Street when he spotted the naked woman, shivering in the shadows of the old abandoned bridge that passed over the park. She huddled there, soaked in tears, another victim of the rock laid bare by the addiction to the altered state of mind. Her pain, her shame was something that no longer touched Tokus. He had seen her condition many times in many guises, but he attributed their plight to weak-mindedness. Some people just have addictive personalities, he reasoned.

Life had forced Tokus into a lifestyle that suited his need to survive a lifestyle just outside the word of the law. He hated the effect of drugs on people and the victims beyond the addicts. But drugs were a crutch people sought with a need, heedless of its impending, destructive effects. No matter, Tokus thought, 'cause I got dreams. Sadly, he looked at the naked girl, turned and walked away, headed back to his favorite street corner. The best drug spot in the city. He fingered the plastic-wrapped pieces of crack in his pocket and mentally prepared himself for a night of selling drugs in a world where dreams die first.

Nane Quartay was born in upstate New York and attended Augusta College in Augusta, Georgia. After a tour in the US Navy, he traveled extensively before returning to New York to begin writing his first novel, Feenin'. He’s also the author of Come Get Some, Feel the Fire, Take Two and Pass, and The Badness. He now lives in the Washington, DC area.

Zane National Bestselling Author of Addicted, The Sex Chronicles: Shattering the Myth, Shame on it All, The Heat Seekers, Gettin' Buck Wild: The Sex Chronicles 2, The Sister of APF and Nervous Feenin takes the genre of "street novels" to another level. Quartay delves into the world of two people that harbor a mutual hatred for society and each other. The supporting characters in the novel are so well-developed that they deserve separate novels of their own.

By Nane Quartay
LIST PRICE £11.99
PRICE MAY VARY BY RETAILER