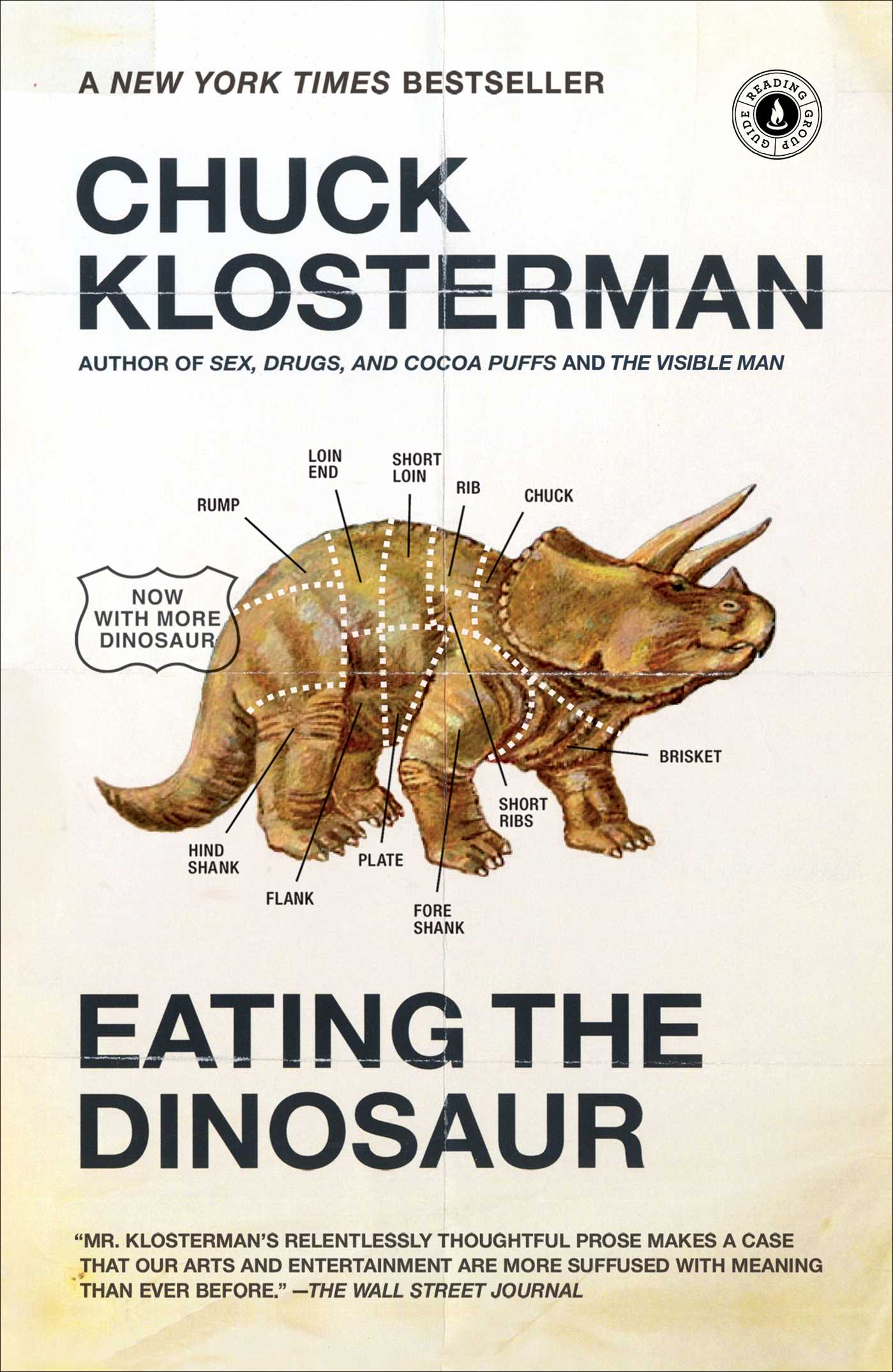 By Chuck Klosterman
LIST PRICE £6.99
PRICE MAY VARY BY RETAILER

After a bestselling and acclaimed diversion into fiction, Chuck Klosterman, author of Sex, Drugs, and Cocoa Puffs, returns to the form in which he’s been spectacularly successful with a collection of essays about our consumption of pop culture and sports.

Q: What is this book about?

A: Well, that’s difficult to say. I haven’t read it yet—I’ve just picked it up and casually glanced at the back cover. There clearly isn’t a plot. I’ve heard there’s a lot of stuff about time travel in this book, and quite a bit about violence and Garth Brooks and why Germans don’t laugh when they’re inside grocery stores. Ralph Nader and Ralph Sampson play significant roles. I think there are several pages about Rear Window and college football and Mad Men and why Rivers Cuomo prefers having sex with Asian women. Supposedly there’s a chapter outlining all the things the Unabomber was right about, but perhaps I’m misinformed.

Q: Is there a larger theme?

A: Oh, something about reality. “What is reality,” maybe? No, that’s not it. Not exactly. I get the sense that most of the core questions dwell on the way media perception constructs a fake reality that ends up becoming more meaningful than whatever actually happened. Also, Lady Gaga.

Q: Should I read this book?

A: Probably. Do you see a clear relationship between the Branch Davidian disaster and the recording of Nirvana’s In Utero? Does Barack Obama make you want to drink Pepsi? Does ABBA remind you of AC/DC? If so, you probably don’t need to read this book. You probably wrote this book. But I suspect everybody else will totally love it, except for the ones who totally hate it.

This reading group guide for EATING THE DINOSAUR includes an introduction, discussion questions, ideas for enhancing your book club, and a Q&A with author Chuck Klosterman. The suggested questions are intended to help your reading group find new and interesting angles and topics for your discussion. We hope that these ideas will enrich your conversation and increase your enjoyment of the book.

Chuck Klosterman has chronicled rock music, film, and sports for almost fifteen years.  Through a variety of mediums and with a multitude of motives, he’s written about everything he can think of (and a lot that he’s forgotten).  The culture keeps accelerating, and the pop ideas keep coming.  In Eating the Dinosaur, Klosterman dissects, among other things, the boredom of voyeurism, the reason why music fans inevitably hate their favorite band’s latest album, and why we love watching superstars fail spectacularly.  Eating the Dinosaur examines the relationship between expectation, reality, and living history.

1.       The first essay in the book features a conversation between Klosterman and filmmaker Errol Morris, in which they discuss the significance and nature of interview responses.  Klosterman and Morris disagree about the importance of narrative consistency versus truth.  If you were to be interviewed on a national stage, would you lie in an attempt to present a better image of yourself, or would you tell the truth because you think truth is always the better story?

2.       Klosterman devotes much of the second essay to analysis of Nirvana’s In Utero, which he defines as “guilt rock.”  Can you think of other examples of popular bands, singers, actors, writers, etc., who, after achieving commercial success, purposely produced or participated in “bad” art?  Why did they do so?  Did they have the same motives that Kurt Cobain is argued to have had?

3.       Consider Klosterman’s comparison of Kurt Cobain and David Koresh.  Do you think he makes a valid case?  Did Eating the Dinosaur change your perception of either man?

4.       Ask yourself the question that Klosterman likes to ask when he’s 5/8 drunk.  If you could phone your 15-year-old self, but only talk for 15 seconds, what would you say?

5.       Do you agree with the assertion that “Seeing the secret lives of others removes the pressure of our own relative failure while reversing the predictability of our own static existence” (page 101)?  Why or why not?  Think of a scenario from your own past in which you enjoyed peeping in on someone.  Why did you engage in that voyeurism?  Can you recall – if it ever occurred – the first time you actively sought out an opportunity to spy on other people?

6.       The essay titled “The Best Response” features statements meant to exonerate people who have gotten themselves into embarrassing, illegal, or career-ending crises.  Do you think these are the best responses?  In your opinion, which is the most successful, and how does your response to this question demonstrate your own ethical values to the rest of the group?  Come up with a few “best responses” of your own – to being caught shoplifting, to your best friend whose birthday you forgot, to your boss who has discovered that you didn’t do the work you told him or her you did.

7.       Klosterman contends that football changes more than any other sport and can therefore be characterized as liberal.  Do you agree?  Can you make a case for why another sport plays a more significant role in American culture and history?

8.       Before having read the chapter entitled “’Ha ha,’ he said. ‘Ha ha.’”, had you ever contemplated what response the existence (or lack thereof) of canned laughter was supposed to elicit?  What is your reaction to canned laughter in television shows?

9.       What do you think the second “It” in the essay titled “It Will Shock You How Much It Never Happened” refers to?

10.   In the final essay of the book, Klosterman states, “My existence is constructed, and it’s constructed through the surrogate activity of mainstream popular culture” (page 228).  What does he mean by this?  Consider your own existence.  Would you draw the same conclusion?

11.   What role did the Q&A’s at the end of each chapter play in your reading experience?

12.   The book description asks if there is a larger theme within Eating the Dinosaur and suggests that it is something about reality.  What other themes are present in this book?  Do you think there’s an overarching message that Klosterman wished to convey?

Filmmakers Errol Morris and Werner Herzog are featured in this book.  View their films, such as The Fog of War, The Thin Blue Line, Grizzly Man, or Encounters at the End of the World with your book club.

A Conversation with Chuck Klosterman

You use the concept of eating dinosaur in an aside that illustrates the absurdity of our desire to travel through time, but the concept, by virtue of being used in the book’s title, seems to have been assigned more significant meaning.  Who is “eating the dinosaur”?  You?  The media?  Society as a whole?  Is this good or bad?

A: The short answer is that I just liked the way that phrase sounded. The long answer is that I am particularly interested in all the versions of media that are regularly defined as "dinosaurs" -- the newspaper industry, the music industry, network television, unmediated sports, etc.

How has your perception of authenticity changed over time?

A: When I was young, I never thought about it. In my late 20s, I came to the conclusion that authenticity (at least as it's applied to art) did not matter and was not important. I now feel like it still does not matter, but it's probably the ONLY thing that's actually important.

How, if it all, has your career as a journalist changed the nature of personal conversations you have?

A: I can no longer tell the difference between interviewing someone and talking to them. But that was probably always the case.

As a pure consumer of entertainment, and not from the standpoint of a music critic, do you enjoy listening to ABBA?  Is it possible to even answer this question within this boundary?

A: This is an easy question to answer. I love listening to ABBA.

What advertising campaign have you attempted to feel immune to, but found yourself wanting the product nonetheless?

A: Every infomercial I've ever seen. I feel like no genre of advertising is more effective than the infomercial.

Did you employ the numbered outline structure in Eating the Dinosaur to facilitate the read, or make it more complex?

A: Probably the former, although the main idea was to reflect the structure of how modern humans think about problems. I would never consciously try to make a book more complex than it naturally was. That seems crazy to me.

Can you tell us who is featured in each Q&A within the book?  At what point during the writing of this book did you decide to include the Q&A’s and how did you select each of them?

A: None of those are real. I decline to answer the second part of the question. Although I will concede that it's a good question.

You recently wrote your first novel, Downtown Owl.  How different was that process from writing nonfiction?  Which narrative form engages you more deeply with reality?

A: It took more time. It was harder. It was less engaged with reality. I guess I've kind of stopped thinking about that book, actually. Maybe I'll think about it again when I write another novel.

You write that being a journalist is a “tremendous way to earn a living.”  If you could have any profession other than your own, what would it be?

A: Private investigator or crisis management consultant. Or are you including dream jobs, like playing in the NBA or being Tony Iommi or something? Could I be a cult leader? Does that count?

You admit to having openly lied in interviews.  How do we know that you’ve told the truth in these responses?

Chuck Klosterman is the New York Times-bestselling author of seven other books, including The Visible Man; Eating the Dinosaur; and Sex, Drugs, and Cocoa Puffs. His debut book, Fargo Rock City, was a winner of the ASCAP-Deems Taylor Award. Klosterman is the Ethicist for The New York Times Magazine, and writes regularly about sports and popular culture for Grantland.com. He has also written for GQ, Esquire, Spin, The Washington Post, The Guardian, The A.V. Club, and The Believer.

By Chuck Klosterman
LIST PRICE £6.99
PRICE MAY VARY BY RETAILER