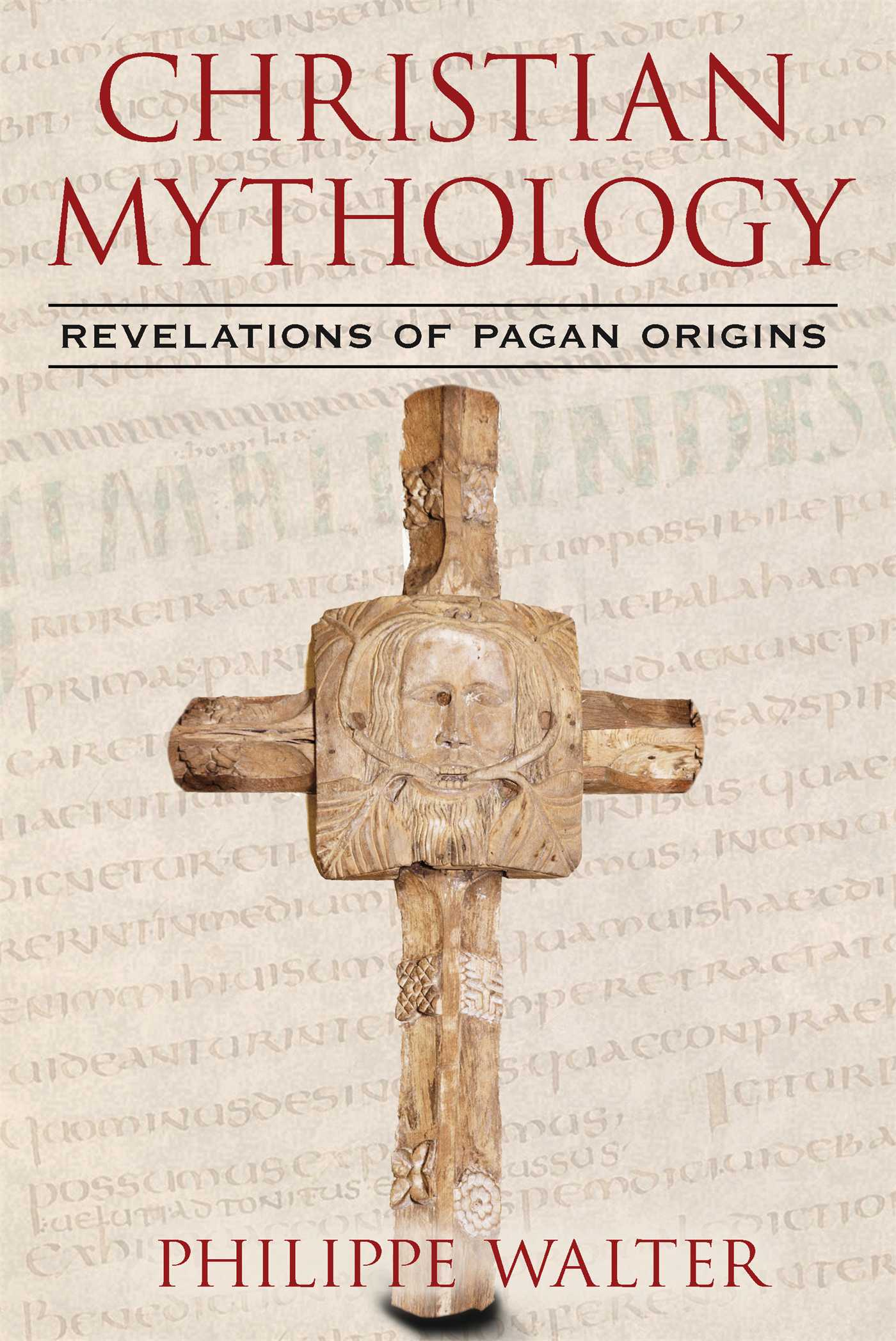 In this extensive study of the Christian mythology that animated Europe in the Middle Ages, author Philippe Walter reveals how these stories and the holiday traditions connected with them are based on long-standing pagan rituals and myths and have very little connection to the Bible. The author explains how the church fathers knowingly incorporated pagan elements into the Christian faith to ease the transition to the new religion. Rather than tear down the pagan temples in Britain, Pope Gregory the Great advised Saint Augustine of Canterbury to add the pagan rituals into the mix of Christian practices and transform the pagan temples into churches. Instead of religious conversion, it was simply a matter of convincing the populace to include Jesus in their current religious practices.

Providing extensive documentation, Walter shows which major calendar days of the Christian year are founded on pagan rituals and myths, including the high holidays of Easter and Christmas. Examining hagiographic accounts of the saints, he reveals the origin of these symbolic figures in the deities worshipped in pagan Europe for centuries. He also explores how the identities of saints and pagan figures became so intermingled that some saints were transformed into pagan incarnations, such as Mary Magdalene's conversion into one of the Celtic Ladies of the Lake.

In revealing the pagan roots of many Christian figures, stories, and rituals, Walter provides a new understanding of the evolution of religious belief.

Any journey into the myths and rites of the Middle Ages should begin in the dark season. The great figures that govern all the mythical thought of both medieval Christianity and paganism take shape on the threshold of winter. We will follow such thought in its dual expression: in hagiography and in its literary and folklore form. This study of contrasts is necessary to grasp the specific character of each tradition as well as to underscore the common elements on which these two traditions are based.

Forty days before Christmas (November 11) is the feast day of Saint Martin, but because of the U.S. and Western European institution of Armistice Day (Veteran’s Day) on November 11 after World War I, the memory of Saint Martin has been considerably weakened. Yet Saint Martin, known as the apostle of the Gauls, played an essential role (perhaps one more symbolic than real) in the conversion of France to Christianity. His actual historical role is no doubt much less significant than the one attributed to him by his posthumous legend. It is undeniable that this figure gives us a key to understanding the masking of paganism by Christianity starting in the first centuries of evangelization in the fifth century.

As we have seen, it was not until this era that the program of Christianization later described by Pope Gregory was put into place. This involved Christianity’s annexing of paganism’s sacred sites (trees, springs, stones of worship), the establishment of an administrative organization (bishoprics, parishes, and so on), the archiving of pagan memory, and the Christian reformulation of ancient mythology into a doctrinal context that conformed to the Gospels (which coincided with the appearance of the first hagiographic documents). The importance of a figure like Saint Martin with regard to the Christianization of the countryside has been noted for a long time.

There is an abundance of folklore concerning Saint Martin. The places where the saint has left traces of his passage are beyond count. One legend shows the similarity between Saint Martin and Merlin the enchanter, who is well known for having built certain megalithic constructions such as the cromlech of Stonehenge near Avebury, known as the Dance of the Giants. In Vauxrenard (Burgundy), the Stone of Saint Martin is also called the Stone of the Fairies or Stone of the Saracens. The story goes that Saint Martin was competing with the devil in transporting enormous blocks of stone to the top of Mount Gouvry. The devil was on the verge of winning when a miracle occurred: The enormous Stone of Saint Martin was carried to its resting place on a cart hitched to two calves and led by Christ himself.

It happens that there is a large number of Saint Martin stones in France, where the saint is alleged to have left a marked trace of his passage. Near Solre-le-Château (in the administrative region of Nord), one of the Saint Martin stones is said to retain the imprint left by his body after he leaned against it to rest. The Stone of Saint Martin in Perrignylès-Auxerre is a Celtic remnant that was Christianized with the establishment of Christianity in this region. Saint Martin is said to have left a print of his knees in Dun-les-Places and that of his feet in Vauclais near Clamechy. The footsteps of Saint Martin’s duck are said to be found carved in a boulder in Lavault-de-Frétoy near Château-Chinon, while a spring supposedly created by the feet of Saint Martin’s donkey still flows at a site named Le Pas de l’âne Caché (Hidden Footsteps of the Donkey) in the canton of Luzy in the Nièvre. Two other Saint Martin stones can be counted in Cuzy, and there are many others in a number of regions throughout France. These stones could certainly be seen as the wild imaginings of a folklore suffering from a lack of notoriety—one that looked to give itself value by establishing such physical and “historical” support. Gregory of Tours himself, in the sixth century, consecrated the authority of such evidence in stone; he reports, for example, that in the Basilica of Tours, it was possible to distinguish the stone on which Saint Martin had sat, and that in Nieuls-lès-Saintes, at the start of a spring that Martin had cause to gush forth, it was possible to see a stone bearing the print of the hoof of the donkey the bishop was riding. The date of the mentioning of these sites confers on them a great value and compels their examination as tangible signs of an active myth. Even if all the Saint Martin stones were not recognized, the fact that two of them were is sufficient to accept the existence of a Martinian folklore during the early Middle Ages and to take into consideration this lore in a mythological study of the saint. While it is quite obvious that these traces should not be studied as historical evidence, they must be noted as the memory’s traces of a myth that are related.

Throughout France and Europe, other saints and illustrious figures are supposed to have left similar imprints on stones, suggesting the survival of old mythic beliefs that, over the years, human imagination has applied to saints or heroes. For ages people have come to such stones to pray for the birth of a child or for healing, as if these natural monuments were the true containers of the power of life thanks to the “holy” memory that has given them life.

In truth, the Saint Martin stones together constitute the popular version of a mythology the written traces of which are often slender and a matter for careful interpretation, but which exists as a major European mythology. It is impossible for a contribution of this magnitude to disappear at the time of the Roman invasion or as a result of the conversion of peoples to Christianity.

Philippe Walter is a professor of medieval French literature at the University of Grenoble III. He has published numerous books on the Middle Ages and oversaw the editing and translation of the Grail romances for the prestigious Bibliothèque de la Pléiade (Gallimard). He lives in France.

“Walter writes in a distinguished academic tradition that goes back to Jesse L. Weston and Sir James Frazier. He describes a rich complex of pagan, European traditions that inform Christian ritual. In doing so, he illuminates beliefs that underlie some of our most cherished stories and practices. I will recommend this book to my students.”

“It is generally understood that Christianity strengthened its position early on in the popular mind by usurping and bending pagan rituals and sacred locales. In this ambitious scholarly treatise, professor of medieval French literature Walter marries the pagan and Christian calendars in great detail by examining ancient myths, saints, and celebrations. He visits All Saints Day, the Twelve Days of Christmas, Candlemas, Easter, Ascension, St. John’s Day of Summer, St. Peter’s Chains Day, and St. Michael’s Day to find that these yearly rounds, roughly 40 days apart, share a mythical realm with the dates of Carnival, best understood as ‘a religion--it was even the religion preceding Christianity.’ Walter’s sources include acts of councils, confessors’ manuals, literary texts such as Arthurian romances, hagiographic works, and medieval iconography. While he doesn’t attack Christianity on its spiritual merits, he concludes boldly that ‘Christianity would have had no chance of imposing itself in the West if, on certain points of dogma and rites, it had not responded to the religious needs of the converted pagans.’ . . . This volume makes a strong scholarly contribution to understanding the evolution of belief, where ‘it is important to understand that nothing has been lost or created.’”