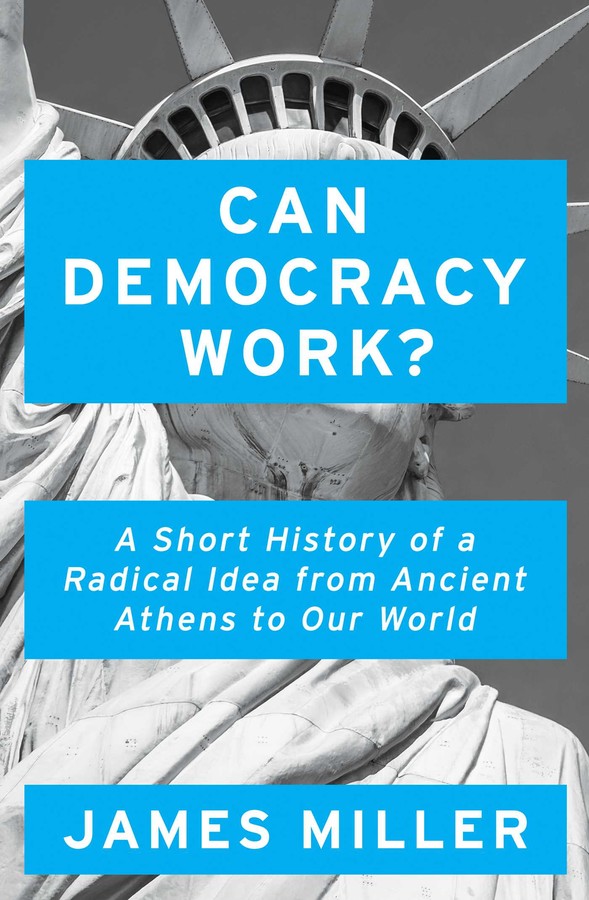 A Short History of a Radical Idea, from Ancient Athens to Our World

Democracy today is widely regarded as an ideal form of government. Yet in practice it sometimes seems a sham, a political puppet show in which hidden elites pull all the strings.

As trust in elected representatives around the world plunges, it is no wonder that democratic revolts have erupted – from Cairo to Kiev and beyond – in an effort to ‘take back control’.

In this urgent and lively history, James Miller reminds us that democracy has always generated tensions and contradictions. Through philosophical debates and violent uprisings, it has been contested, corrupted, and refined. In different times and different places – from ancient Athens to revolutionary France to post-war America – its meaning has shifted in surprising ways.

For over two thousand years, the world has experimented with democracy. But can it really work – especially in complex modern societies?

James Miller is a professor of politics and the chair of liberal studies at the New School for Social Research. He is the author of The Passion of Michel Foucault among other books. He lives in Manhattan, New York.

‘An attractively broad and accessible account of democracy from the Greeks to the present… Particularly timely.’

‘What makes the book compelling is its focus on colorful thinkers, activists, and political leaders who lived and breathed the democratic moment throughout history… Miller shows that democracy’s ascent is best seen not as a gradual unfolding of a political principle driven by reason and moral destiny but rather as a grand roller coaster ride of struggle, revolution, and backlash. Today’s populist outbursts look quite ordinary alongside this history.’

‘In this smart, tremendously readable history, Miller tackles the paradox at the centre of the democratic dream… Both challenging and accessible, this title is highly recommended.’

‘The strength of this book lies…in the exquisite portraits it paints of characters who stand behind the immortalized Pericles, Robespierre, and Thomas Jefferson… [Miller] forces the reader to sit up and realize that history isn’t a definitive greyed parchment beyond reproach, but actually a living force constantly capable of new interpretation and meaning in our current world… Like the ekklesia in Athens, the constituent assembly in Versailles, and the soviet in Petrograd – Can Democracy Work? offers insightful context on how our own body politic will survive these turbulent times.’

‘Distinguished historian of ideas James Miller’s short history of democracy and its different meanings is both compulsive and compulsory reading for our sometimes shockingly disenchanted times. Ever optimistic, Miller remains enamoured of his native United States’s striking experiment in cosmopolitan self-governance, and stands proudly and persuasively tall for liberal – and democratic – ideals.’

‘This is a bold, eloquent, and utterly convincing history of what democracy has meant and should mean – from the Assembly of Ancient Greece to the anti-Trump resistance. James Miller has produced one of the wisest reflections on the glories and limits of popular rule I have ever read.’

‘At the very moment of democracy’s apparent endangerment, one of its best friends offers up the most capacious and inspiring history of it ever composed. From the Greeks to the present, Miller’s light touch and profound insight join each other on every page to make this a truly indispensable work for the present crisis.’

– Samuel Moyn, author of Not Enough: Human Rights in an Unequal World

‘No one is better qualified to wrestle with the riddle of democracy than James Miller, which is why I have been eagerly awaiting this brilliant and necessary book. Can Democracy Work? is an eloquent, clear-eyed account of democracy’s myriad challenges. This concise and compelling history deserves to be read and debated by all of us who still dare to dream of a society of equals. These pages left me feeling better prepared and reinvigorated to work toward a more democratic future.’

– Astra Taylor, director of What is Democracy? and author of The People’s Platform

‘James Miller, who has illuminated democracy’s radical possibilities, now offers some sharp reflections on how those possibilities have fared over the centuries. At a moment when the very meaning of the word is up for grabs, Miller brings us back to philosophical essentials as forged by contingency, contradiction, and human folly. Refreshing and unsettling, here is some political intelligence in a dark and confusing time.’

– Sean Wilentz, author of The Rise of American Democracy

‘This sharp, spirited, engaged intellectual history of democracy, including its recent and often loose coupling with liberalism, combines an appraisal of both inherent and situational pitfalls with an appreciation of redemptive possibilities. If democracy is protean, what matters, this rich work teaches, is the quality of our normative choices and institutional imagination.’

A Short History of a Radical Idea, from Ancient Athens to Our World