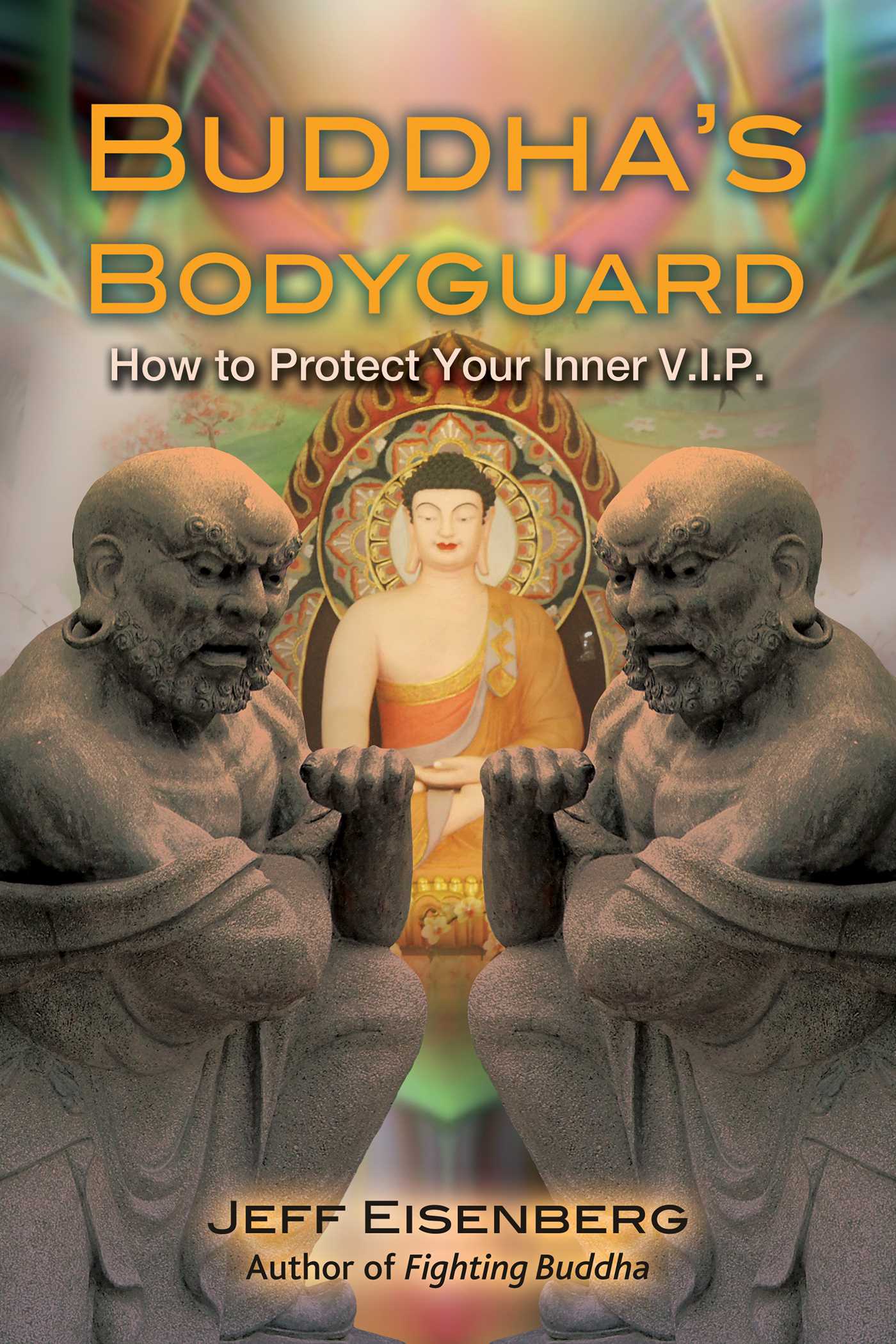 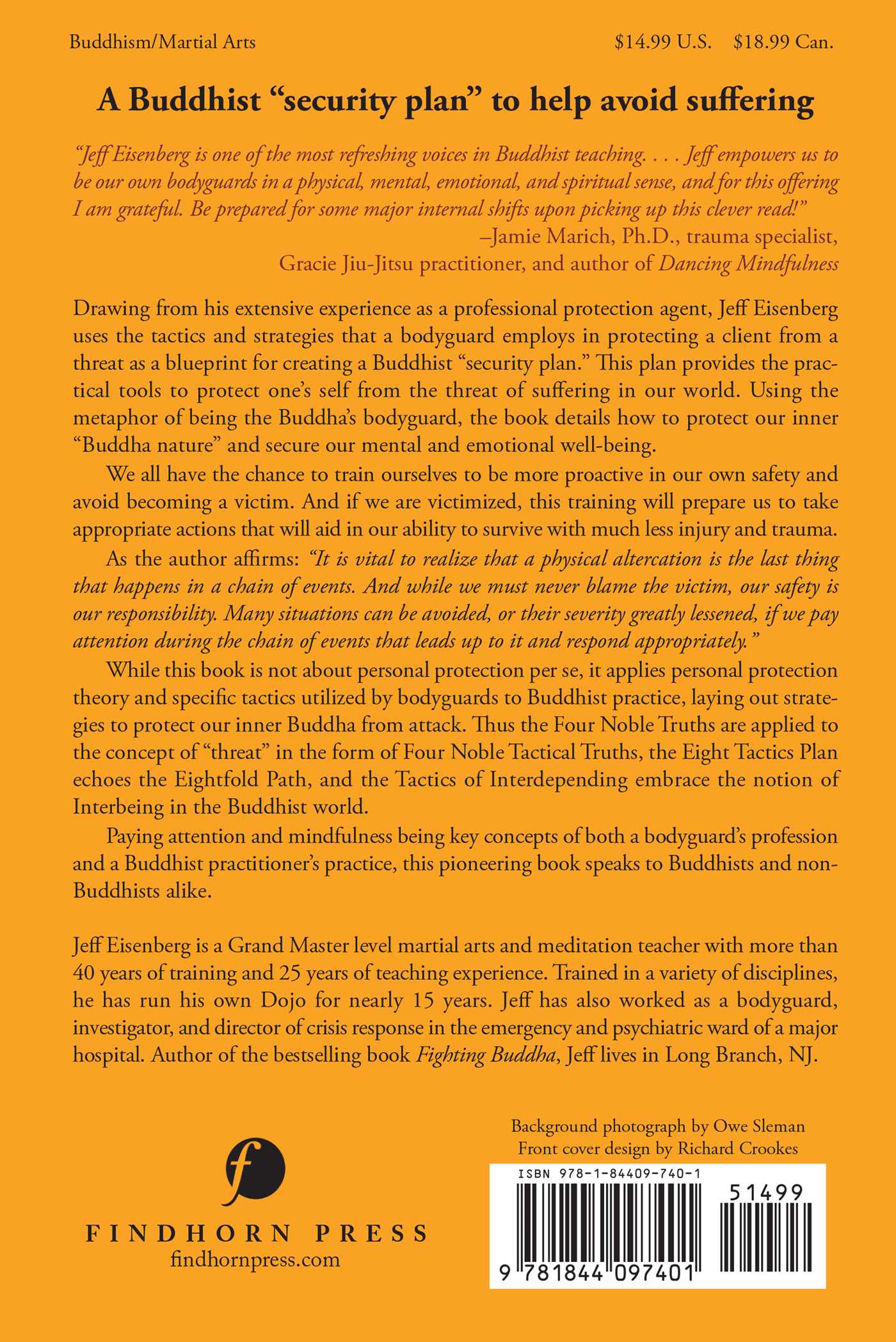 How to Protect Your Inner V.I.P.

• Offers a new, modern understanding for the new generation of Buddhist practitioners intrigued by a more Western take on Buddhism

Drawing from his extensive experience as a professional protection agent, Jeff Eisenberg uses the tactics and strategies that a bodyguard employs in protecting a client from a threat as a blueprint for creating a Buddhist “security plan.” This plan provides the practical tools to protect one’s self from the threat of suffering in our world. Using the metaphor of being the Buddha’s bodyguard to understand the Buddhist teachings, the book details how to protect our inner “Buddha nature” and secure our mental and emotional wellbeing.

We all have the chance to train ourselves to be more proactive in our own safety and avoid becoming a victim. And if we are victimized, this training will prepare us to take appropriate actions that will aid in our ability to survive with much less injury and trauma. As the author affirms: “It is vital to realize that a physical altercation is the last thing that happens in a chain of events. And while we must never blame the victim, our safety is our responsibility. Many situations can be avoided, or their severity greatly lessened, if we pay attention during the chain of events that leads up to it and respond appropriately.”

While this book is not about personal protection per se, it applies personal protection theory and specific tactics utilized by bodyguards to Buddhist practice, laying out strategies to protect our inner Buddha from attack. Thus the Four Noble Truths are applied to the concept of “threat” in the form of Four Noble Tactical Truths, the Eight Tactics Plan echoes the Eightfold Path, and the Tactics of Interdepending embrace the notion of Interbeing in the Buddhist world.

With “paying attention” and mindfulness being key concepts of both a bodyguard’s profession and Buddhist practice, this pioneering book speaks to Buddhists and non-Buddhists alike.

The Second Noble Tactical Truth: Security Breach… There is a beginning of the threat

The second noble truth says that there is a beginning to suffering and that it is attachment. That to bodyguard our inner Buddha, we must understand this fact and be able to identify this starting point. Like the bodyguard responding to a security breach, our ability to see that our mental and emotional security has been threatened or breached usually begins only after the fact that it has been. And just as realizing that there has been a security breach is the first step of being safe and secure, identifying one’s mental and emotional vulnerability is the beginning of eliminating it.

People most often come to Buddhism motivated by some sort of crisis, as they look to understand it and to find a way in which to deal with it, not understanding that their realization that there is a crisis, is in fact dealing with it. As a master once said, “people that are looking for spirituality do not realize that they already have it.” Meaning, that they don’t see that the looking itself is what they are looking for, as the desire to pursue a deeper level is a deeper level.

For bodyguards the greatest threat is the one that is unidentified, and as I’ve said, more often than not, a threat is not identified until it begins. So since a security breach reveals the beginning of a threat, the first thing a body guard does when a client expresses their concerns about themselves and their family’s safety is to do a security survey. A security survey will help identify the conditions that not only can create a threat, but will expose the vulnerabilities that create the opportunity for security to be breached by the threat.

This survey involves getting extremely personal with the client and going over all aspects of their life down to the smallest detail. Schedules, itineraries, activity’s, locations and the routes to and from them, health issues, as well as the status of all their relationships, including family, spouses and significant others both current and former, business associates, friends, employees, care takers, are all closely scrutinized. The client is even pressed to reveal un-flattering information in regards to extramarital affairs and unethical and even illegal activities, as these are often the basis of threat vulnerability. Once identified, these vulnerabilities are secured by altering the client’s interaction with them or eliminating them altogether from the client’s life. In the protection world this is called “hardening the target”.

In Buddhist practice we must do the same thing to protect our inner Buddha. We must harden ourselves as targets by doing a survey of our vulnerabilities. We must get extremely personal with ourselves and ask some tough questions about our lives. We must find where our weaknesses lie, and identify what and who are threats to them. Who are the difficult people in our lives? What are the scenarios that accompany our involvement with them? What is the nature of the relationships conditioning? What are the habitual behaviors resulting from that conditioning? What new strategy can be utilized in facing this threat, or should it be avoided entirely?

In the protection world whether to face a threat or not is a question that is often asked, as to knowingly enter into a potential threat scenario is decided based upon weighing out whether doing so or not is worth the risk? This might seem like an odd question to have to ask, but many high profile clients have responsibilities that often cannot be left unattended and to do so is nearly impossible regardless if the bodyguard recommends it. Many times protection agents are under-minded by their clients who veto their requests to change schedules, cancel appearances, avoid certain routes, or not engage in spontaneous activity that’s not on the itinerary.

The bodyguard is a detail oriented, micro manager that to the best of their ability leaves nothing to chance. While the client is often short sighted, acting on impulse, ignorant of the potential consequences of the chain of events that they are setting in motion, the bodyguard relies on clearly seeing the big picture. Most times, rather than having the luxury to weigh out whether doing something is worth the risk or not, and having the opportunity to avoid it, the bodyguard finds himself having no choice but to engage the risk due to the client’s lack of willingness and cooperation to concede to an alternative plan.

The twelve links of the chain of causation explains the workings of dependent origination by detailing the specific causes and effects that act and react to bring things into existence. These teachings go hand in hand with understanding the five aspects of conditionality that I discussed earlier, as understanding the phenomena that we call self and how it’s conditioned mental process works, is imperative to understanding how to end suffering.

Formation is the coming together of our intentions, ideas and impulses, which form our harmful thoughts, speech, and actions. This creates the third link in the chain, which is consciousness.

Jeff Eisenberg is a Grand Master level martial arts and meditation teacher with over 40 years of training and 25 years of teaching experience. He has run his own Dojo for nearly fifteen years and trained thousands of children and adults in the martial arts. He has also worked as a bodyguard, investigator, and director of crisis response in the emergency and psychiatric ward of a major hospital. Author of the bestselling book Fighting Buddha, he lives in Long Branch, New Jersey.

“Jeff Eisenberg is one of the most refreshing voices in Buddhist teaching. His emphasis on the practical resonated with me since I first encountered his first book, Fighting Buddha, and in this latest volume he continues to teach us how to translate practice into workable action. Jeff empowers us to be our own bodyguards in a physical, mental, emotional, and spiritual sense, and for this offering I am grateful. Be prepared for some major internal shifts upon picking up this clever read!”

“Drawing from his experiential knowledge of being a Buddhist practitioner, professional bodyguard, and martial artist, Jeff Eisenberg delivers wisdom on personal protection of body, mind, and spirit.”

“Another gem, or should I say ‘Dharma Jewel’ from Mr. Eisenberg! The Buddha’s teachings from the world of protection and safety walk side by side in this wonderfully written manual. Practical and always entertaining. Even if you have never set foot inside a Buddhist temple, or have been a bodyguard, you will learn a helluvalot from this book! I highly recommend it.”

How to Protect Your Inner V.I.P.