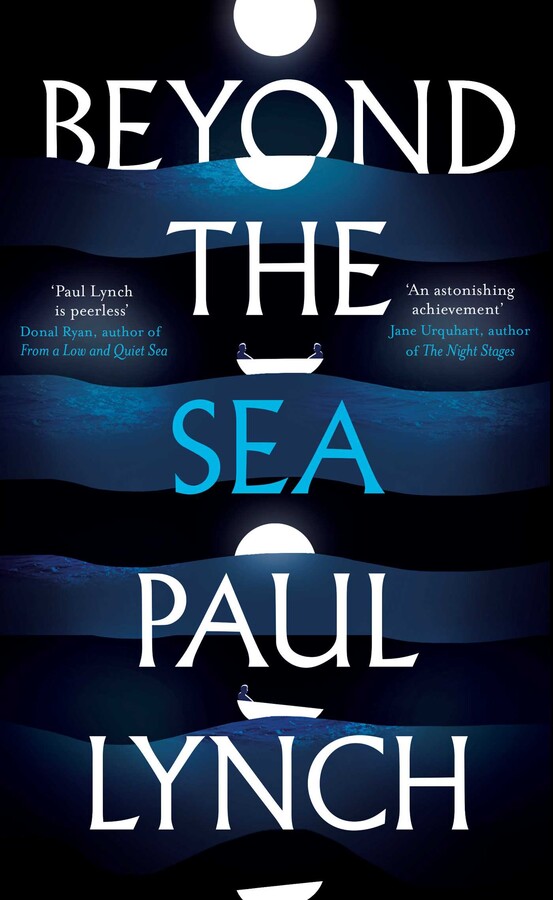 From the winner of the Kerry Group Irish Novel of the Year Award, 2018

By Paul Lynch
LIST PRICE £4.99
PRICE MAY VARY BY RETAILER

Chosen as a Book of the Year by Sebastian Barry, Martina Devlin and Peter Cunningham

Hector and Bolivar set sail from their South American fishing village on what they believe to be a routine expedition. But then a devastating storm casts them adrift in the middle of the Pacific Ocean. With no means of contacting the outside world and no sign of rescue, their only hope lies with one another. Both men must confront the truth about themselves, and the regrets that they have spent a lifetime trying to forget, if they are to survive.

Part gripping story of resilience, part fearless existential parable, Beyond the Sea is a meditation on what it means to be human, in a world that pushes us to the brink.

'Lynch demonstrates a control over his ideas that comes from a pure lyrical telling, a speech act that, if you let it, will take you anywhere. Beyond the Sea is frightening but beautiful.'

'I finished this exquisite, meticulous, powerful novel...this afternoon. A fisherman and a youth adrift on the Pacific in a fishing boat. Nothing & everything happens, often at the same time. And what a stylist.'

'Brutal and poetic... Alive with elegance and insight.'

'Blew me away...a beautifully written and tightly controlled novel about the human spirit and what happens when it is pushed to the limit.'

'[Lynch’s] novels are artistic creations…this absorbing book is an evocative one…His fourth novel has echoes of Melville, Dostoyevsky and William Golding…But the literary work it most invokes is Coleridge’s The Rime of the Ancient Mariner.'

'Such an aching sense of spaciousness feels in the spirit of its exotic setting, of Latin American sensualists such as Paulo Coelho or Pablo Neruda, or the deep eastern wisdoms of Hermann Hesse... Beyond the Sea deserves a special place in Lynch's increasingly fascinating and diverse catalogue.'

'The writing is vivid…conveying the claustrophobic reality of confinement in a small vessel.'

'Lynch has mastered the art of capturing his characters' anguish, and there is an enigmatic lyricism to his storytelling… The story is fantastically written, a truly magnificent portrayal of the gritty battle between despair and hope.'

'A lucid, lyrical tale of two lost men… The language attains a poetic intensity that is unusual and well earned.'

'Paul Lynch won the Irish Novel of the Year 2018 for Grace, a lushly lyrical adventure story set in Famine-era Ireland. His follow-up...[is] a short but absorbing tale of the lengths to which people go to avoid admitting who they really are.'

'As good as anything I've read in recent memory.'

'Lyrical, fantastical and almost hallucinatory… Lynch paints a wonderful picture of both the vastness of the ocean and the claustrophobia of the two men on the tiny boat… Like the protagonists, the reader too experiences a sense of dissociation from reality while traversing this haunting, dreamlike novel.'

'Richly imagined…[has] the timeless aura and allegorical undertones of an ancient Greek myth…This is a book that will leave you feeling thoroughly wrung out by the final page, but also happy to be alive.'

'Combining the sensibilities of a Joseph Conrad or a Cormac McCarthy with the poetic intensity of an Emily Dickinson, this rich, raw, and powerful seascape by Paul Lynch throws the sea’s storms and the sea’s light into the darkest corners of human consciousness. An astonishing achievement.'

'An epic with, as epics should have, more than a touch of poetry about it, and possibly the grimmest, but also most beautifully written, novel set at sea that I have read since William Golding’s Pincher Martin.'

'Beyond the Sea is a masterpiece.'

– Mia Gallagher, author of Beautiful Pictures of the Lost Homeland

'Lynch manages to transform a news story into a universal tale of friendship and endurance and love... Beyond the Sea is elemental. It is a story sliced to the bone. It compels the reader to look unblinkingly at matters of life and death, at the heart of what it means to be fully human.'

'A powerful, heart-breaking story of friendship forged in the most extreme conditions. With its echoes of Greek myth, it yields up those small moments of grace that are deeply transformative.'

'Beyond the Sea sets us adrift in the unbounded ocean and stuns us with beautiful, fierce insights. After the familiar world has receded and the stories we tell ourselves have dissolved, we are left to confront our barest fears and self-accusations. Paul Lynch submerges us in the wildness of our own minds; I resurfaced changed.'

– Chia-Chia Lin, author of The Unpassing

'A novelist with the eye and the ear and the heart of an absolute master. Paul Lynch is peerless.'

– Donal Ryan, author of From a Low and Quiet Sea

'Lynch makes the page sing like the old masters.'

– Philipp Meyer, author of The Son

'This poetic, ambitious tale by award-winning writer Paul Lynch is reminiscent of Cormac McCarthy and even Ernest Hemingway, though in its Irish fluency and lyricism it is stylistically far away from Hemingway.'

'Paul Lynch is one of our greatest writers, and Beyond the Sea is his best work yet. A sublime, elemental, fever dream of a novel that constantly tests us, tempts us, and guides us. This is a work of art that relentlessly and slyly captures not only the trials of the human spirit, but what we are doing to our environment, our world, and to each other – a profound, unforgettable journey, one I urge you to experience.'

– Paul Yoon, author of The Mountain

'The light and dark of their lives play out in a story that is dazzling, unsettling and deeply revealing of the human condition.'

'With echoes of Camus, McCarthy, Hemingway, and Coleridge, Lynch illustrates the reciprocally indifferent relationship between humanity and its environment, while subtly highlighting the same indifference between humans. The author of Grace (my favourite novel of 2017) presents a harrowing, yet redemptive tale of spiritual purgation delivered with poetic and deeply evocative prose.'

'With lyrical skill, Lynch reveals each man's regrets and hopes and fears, leading to a life-changing end for them, and possibly for you, too.'

'One of his generation's very finest writers.'

'[Lynch] uses brevity to keep the heat on, in terms of emotion and drama. At the same time, the narrative carries considerable intellectual weight; brevity here does not translate to fast and easy reading. On the contrary?the prose, while fluid, is packed with enough ideas to make you want to pause and reflect after every section, as when reading poetry.'

'An unflinching look at the physical, mental and emotional mechanisms which humans use for surviving the most extreme conditions, the novella glistens with potent dialogue and lyrical descriptions… It’s also a heart-rending story about relationships and redemption… Paul Lynch is rightly considered one of Ireland’s rising literary stars.'

'Readers who know Lynch's previous book, Grace, set in Ireland during the Great Famine, will know what poetry he brings to the plight of people forced to the very brink of existence.'

'Shadows of Hemingway, even Graham Greene?... [There are] more than enough questions, prompted by Lynch's narrative, to keep people thinking and reading.'

'A celebration of the way that humans are able to face the most horrendous circumstances and manage to continue fighting for survival.'

From the winner of the Kerry Group Irish Novel of the Year Award, 2018

By Paul Lynch
LIST PRICE £4.99
PRICE MAY VARY BY RETAILER