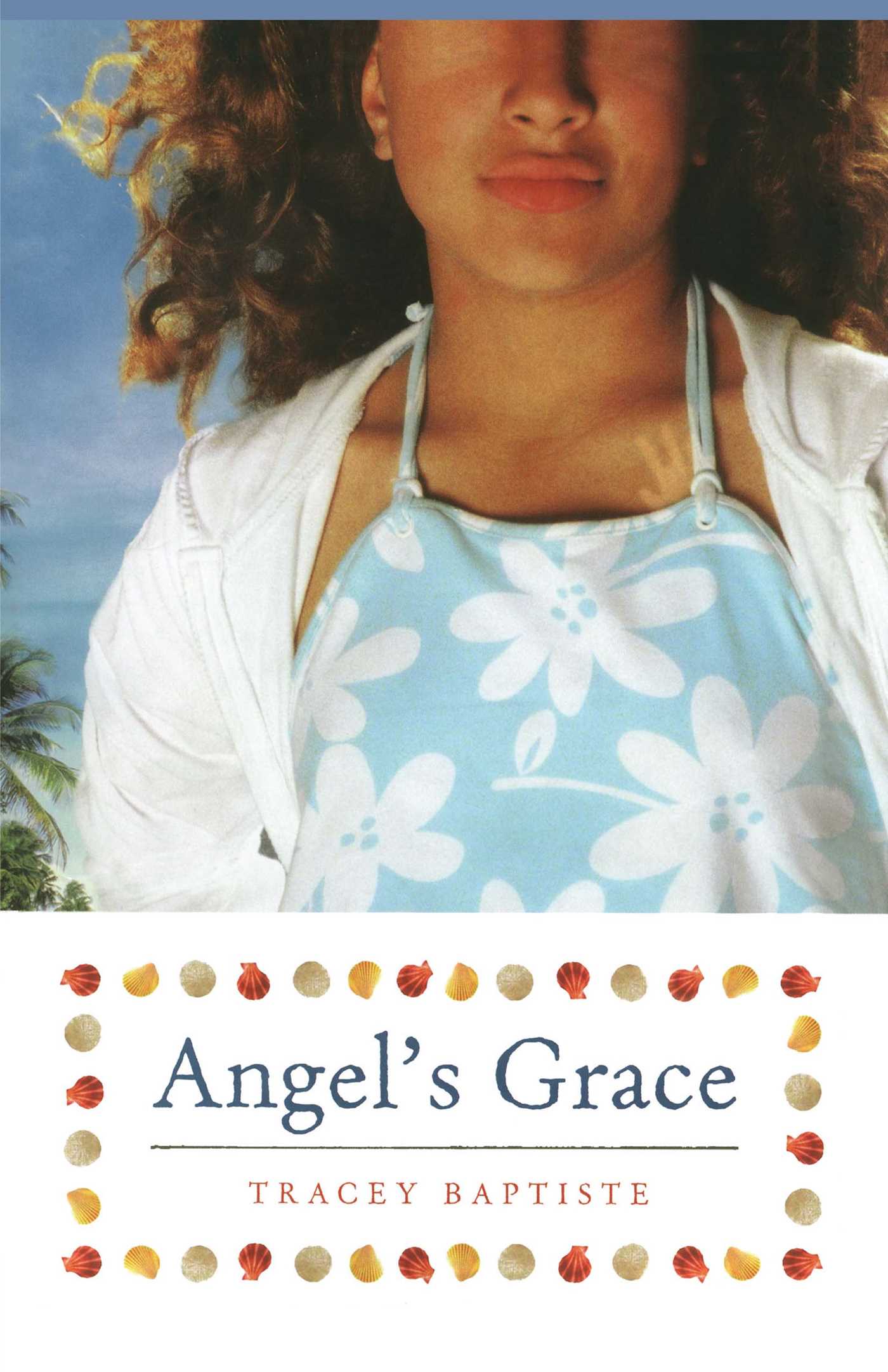 Grace has always had wild red hair like no one else in her family and a birthmark on her shoulder that her mother told her was the mark of an angel. When Grace is sent from New York to spend the summer with her grandmother in Trinidad, she looks through the family album and discovers a blurred photograph of a stranger with a birthmark -- her birthmark -- and Grace is full of questions. No one is able to identify the man in the photo, and Grace is left with no choice but to find out who he is and what he might mean to her. What Grace does not know is that her search will lead to a discovery about herself and her family that she never could have imagined.

Tracey Baptiste's first novel is a tender coming-of-age story set on the island of Trinidad. Angel's Grace explores the meaning of identity and truth, and the unbreakable ties of a family bound by love.

My mother told me that when I was born, no one, not even the doctor, thought I was going to live. I arrived too early, and I was so tiny, the doctors had to keep me in an incubator so that I could breathe. And every day, my mother sat by me and fed me and prayed for me and cried because she didn't know what else to do. One day she fell asleep in the chair next to my incubator, and she dreamed that an angel came to watch over me. He was beautiful, my mother said, and he smiled at the both of us and told her that everything was going to be just fine. He put his hand over my heart and promised her that I would be fine. When my mother was finally able to take me home and she bathed me for the first time, she noticed a mark like a small pale hand above my heart. She remembered the angel, and knew that it wasn't a dream after all. He had touched me, and that was how I had gotten better. My mother told me that this was better than a birthmark, that it was an angel mark, and that I should be happy knowing that the good Lord had sent a guardian angel to watch over me.

At times when I felt sad or lonely, I asked my mother to come to my room and tell me the story all over again. I would put my hand over the angel mark, and she would put her hand on mine, and the three of us would smile at our story -- Mom, the angel, and me.

I stopped believing in that story four years ago, when I was nine. I guess I just grew up all of a sudden. The story about my birthmark began to seem silly. But maybe if I still believed in my angel, I could put my hand over my birthmark, and I would feel better about this awful summer. What could be worse than being held prisoner on the island where my parents grew up, with my sister and my grandmother? I just knew that Maciré and my other friends were having a great time back home in Brooklyn. I was missing everything.

At first my best friend, Maciré, was jealous when I told her that I'd be spending my summer on a Caribbean island. I pulled the letter I had written earlier out of my pocket.

Let me tell you a little something about Trinidad. It's a great place to visit -- blue sky, sandy beaches, and delicious exotic fruits so sweet and ripe they fall right off the trees. But every day it's the same blue sky, and after the hundredth wave sends you crashing down into the gritty sand, and you've swallowed a gallon of salt water, and the damp and the mosquitoes get to you, and there's sticky juice in your hair from the fruit falling on your head, you get a little bit tired of living on an island. Two weeks down, six more before I get back home.

"Grace, you get them zaboca yet?" Ma called down. Ma was my mother's mom. She practically lived in the kitchen. The smell of whatever she was cooking got into her skin, so that when you breathed her in, you could smell warm baked bread and roasted sausages, or curried crab and dumplings, or whatever she had just made into a meal.

"Well, your aunty going to be here soon, child. You better hurry it up."

"Yes, Ma," I said quickly. I had learned long ago not to keep Ma waiting.

My grandmother eyed me from the kitchen window two stories up. Her thick glasses glinted in the sunlight, then fogged up when steam from the pot poured through the open window. I took a deep breath and caught a whiff of something spicy and sweet.

"You'll find out when you come up here with them zaboca," she told me.

That was the other thing about Trinidad. Nothing and nobody is called by their right name.

Trees and flowering shrubs filled Ma's yard. There were guava, pomerac, avocado, and bay trees. And hibiscus, orchid, and croton plants brightened every corner of the yard. In a corner at the back was a neat area just for herbs like thyme, basil, chives, and dill weed. That morning Ma had me pick some bay leaves to brew for our breakfast tea. And the avocados were to be sliced and served as a side dish at dinner.

I moved slowly toward the avocado tree. In Brooklyn you got avocados from crates at the fruit stands on Church Avenue. No standing in the mud with a ten-foot pole. I chose a low branch and thrust the pole up. It touched nothing and tipped over, nearly hitting the side of Ma's yellow house. I moved a little to the right and tried again. This time, I hit leaves and brought down a flutter of them, along with the rainwater they had cupped from last night's downpour.

I shook my hair free of water and leaves and looked around. Just past the tree was the mossy brick fence that separated Ma's and the neighbor's yard. If I got a running start I could probably pole-vault over it. I shook the thought out of my mind and thrust the pole up a third time. This time it hit a young avocado, but did not bring it down.

"You not doing it right. You want me to help you?" someone asked.

I took a step backward as a boy from the yard next door hoisted himself up to the top of the brick fence in one smooth move. He flung his legs over, showing muddy flip-flops, and jeans cut off at the knee. He was long, brown, and skinny, with straight black hair that fell down over his forehead, and eyes the color of burnt sugar. "I've got it. Thanks," I said dryly.

He jumped down and stood beside me, looking into the tree. "Oh yeah? Well it don't look so to me, nuh?"

Who exactly did this kid think he was? And how long had he been watching me? I wasn't about to let him show me up. I raised the pole again right up to the biggest avocado on the branch, pulled it back, and swung it toward the branch as hard as I could. It hit, but no avocados came down. The boy tilted his head back and laughed. I couldn't help but laugh too.

"You don't know how to do nothing, nuh?" He motioned for me to hand him the pole, and I did. Mosquitoes were already beginning to feast on my legs, and I wanted to be inside, sitting on Ma's couch, drinking freshly made watermelon juice.

The boy looked into the tree and threw the pole up once. He caught it as it came down, and moved me aside as an avocado landed on the wet grass at our feet, splattering us with mud. He did it three more times, each time bringing down ripe fruit.

"That's how you pick a zaboca," he said. He leaned the pole on the side of the house and hoisted himself back over the fence. "All right, eh, America?" he said.

I stood gaping at the spot he had disappeared behind. How did he know I was American? My eyes drifted to the avocados at my feet. "Thanks," I shouted. But there was no reply. "Well, at least I tried to be polite," I mumbled to myself.

I climbed the wooden back stairs to the kitchen with the avocados and dropped them gently in the kitchen sink.

d"The tree bearing plenty these days, eh?" Ma said. "How you didn't give the neighbor boy one? Is he who picked them after all."

I pretended to wipe my chin on my shoulder to get away from her look and concentrated on washing the dirt off the avocados.

Ma put tomatoes, cucumbers, and a head of lettuce in the sink. "Here. Fix up the salad." Then she turned her attention in the direction of the living room. "Sally! Sally, come here, please."

Sal, fresh from a nap on the couch, stumbled into the kitchen rubbing her eyes and stretching her long limbs in every direction. Even though she was three years younger than I, we were about the same height.

"Then set the table, please. Your aunty Jackie will be here any minute."

By the time I had finished tossing the salad with salt and pepper -- Ma always said, all you needed to dress a salad properly was salt and a dash of pepper -- Aunty Jackie pulled into the driveway. I forgot all about the avocados and raced Sally to the porch just in time to see our aunt squeeze her large frame out of her very old, dented, and scratched-up car. She opened the back door, pulled out a book the size of the Brooklyn Yellow Pages, and waved it at us. Then she winked. A grin spread across my face. I knew that winking means secrets, and I could hardly wait to hear the stories Aunty Jackie would tell us tonight. 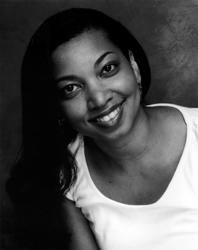 Tracey Baptiste was born in Trinidad and moved to Brooklyn, New York, when she was fifteen. Ms. Baptiste is a former elementary school teacher. She lives with her husband and daughter in Englewood, New Jersey, where she is at work on another novel.