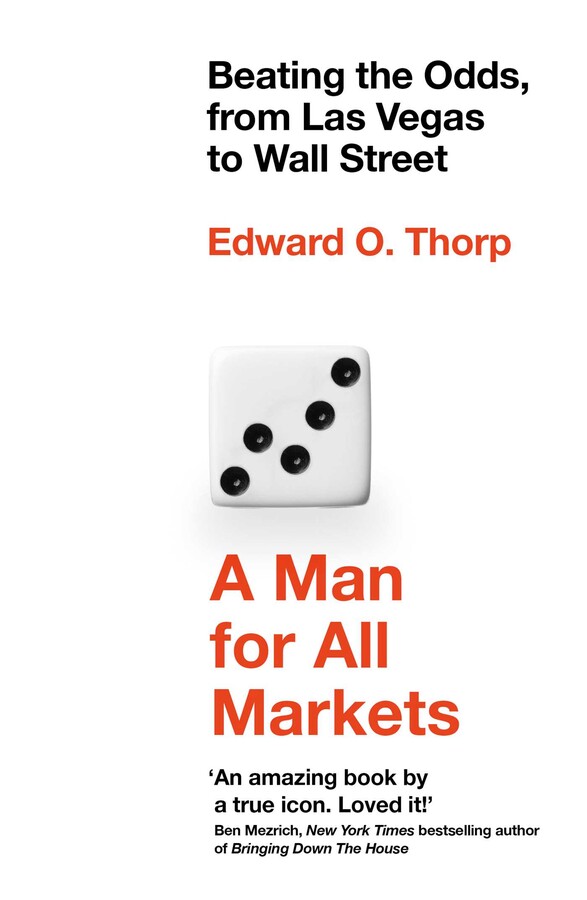 A Man for All Markets

Beating the Odds, from Las Vegas to Wall Street

In a remarkable career, Edward O. Thorp rose up from nothing to become a professor at MIT, invented card counting and the world’s first wearable computer, beat the casinos of Las Vegas at blackjack and roulette, then became a bestselling author and a hedge fund heavyweight, ushering in a revolution on Wall Street. Now he shares his incredible life story for the first time, revealing how he made his fortune and giving advice to the next generation of investors. An intellectual thrill ride, replete with practical wisdom, A Man for All Markets is a scarcely imaginable tale of ludicrous success.

‘An amazing book by a true icon; Thorp launched revolutions in Vegas and on Wall Street by turning math into magic, and here he weaves his own life lessons into a page turner as hot as a deck full of aces. Loved it!’

– Ben Mezrich, New York Times bestselling author of Bringing Down The House and The Accidental Billionaires

‘An extraordinary autobiography which reads like a novel and contains insights into what has gone wrong with the financial system along the way.’

‘In A Man for All Markets, [Thorp] delightfully recounts his progress (if that is the word) from college teacher to gambler to hedge-fund manager. Along the way we learn important lessons about the functioning of markets and the logic of investment. ’

‘Ed Thorp takes us on an incredible journey as we learn how to beat blackjack, roulette, and then Wall Street, stop off to have dinner with a young Buffett, unmask Madoff before anyone else, and so much more. More important, it’s all fun, fascinating and filled with lessons we can all use to be more successful in business and life. Learn and enjoy, I did!’

– Joel Greenblatt, author of the New York Times bestseller The Little Book that Beats the Market

‘In A Man for All Markets, [Thorp] delightfully recounts his progress (if that is the word) from college teacher to gambler to hedge-fund manager. Along the way we learn important lessons about the functioning of markets and the logic of investment.’

‘The gripping story of how one man’s genius and dedication has solved so many problems in diverse fields…There is nothing more important than knowing how to think clearly. Read this book and learn from a master.’

‘Whether you are an aspiring professional player, a casual gambler, or an occasional visitor to Las Vegas, you can feel the impact of Professor Ed Thorp’s intellect on that desert city. In 1962, Thorp published the classic book Beat the Dealer. The text was based on Thorp’s original research that stemmed from his curiosity about the game of 21, and was billed as a “how to book” for the lay person to beat the casinos at blackjack. And simply stated it changed everything…The book chronicles Thorp’s heroic-like arc from his humble beginnings growing up in a family that struggled to get by – first in the cold winters of Chicago and later in the sun soaked cities of southern California, where he excelled in a variety of high school science courses and ultimately earned a scholarship for his exceptional talents in physics – on through his professional career as a gaming guru, and ultimately to his amazing success in a stock market-centered career, where he would take his knowledge and understanding of games of chance and apply it to the biggest casino in the world, Wall Street…A Man for All Markets chronicles Thorp’s personal journey in navigating the unexpected and sometimes dangerous obstacles that come along with challenging the status quo of a wealthy corporate adversary.’

‘Illuminating for the mathematically inclined, and cautionary for would-be gamblers and day traders.’

‘The kind of thing any would-be investor, to say nothing of casino cowboy, ought to read. Thorp’s in-the-trenches account of gaming the system(s) is a pleasure – and instructive, too.’

A Man for All Markets

Beating the Odds, from Las Vegas to Wall Street