Nora Guthrie, Woody Guthrie's daughter, is the Director of the Guthrie Archives, President of Woody Guthrie Foundation and Woody Guthrie Publications, Inc. She develops projects that bring Woody Guthrie's vast cultural and, often unknown, creative legacy to life. Her ground-breaking pairing of Woody's unpublished lyrics with music by contemporary artists has expanded Woody's iconic image, forever changing how we know him. Nora's collaborative projects have resulted in the release of over 150 new lyrics and artwork publications in only the last 20 years, pioneering the revitalization of Woody Guthrie's expansive legacy. In 1996, Nora Guthrie co-produced the first Rock-n-Roll Hall of Fame Guthrie tribute concert with performers Pete Seeger, Tim Robbins, Billy Bragg, Country Joe McDonald, Indigo Girls, Ani DiFranco, and Bruce Springsteen among others, and co-curated the first major exhibition on Guthrie for the Smithsonian Institution Traveling Exhibition Series which toured at major museums throughout the country for three years. Nora was executive producer of the Billy Bragg/Wilco Grammy-nominated Mermaid Avenue multi-disc sessions, which premiered the collaboration of Woody's unpublished lyrics with contemporary artists. Since 1998, Nora has released many albums that use Woody's lyrics; Daddy O Daddy, Ticky Tock, Happy Joyous Hanuka, Grammy winner Wonder Wheel, Grammy winner The Live Wire, The Works, Note of Hope, and most recently, New Multitudes. She was a co-editor to the book Woody Guthrie Artworks (Rizzoli, 2005) and contributor to Kathy Jakobsen's This Land Is Your Land (Little, Brown & Co, 1998) and New Baby Train (2004). In 2012, Nora is co-producing with the GRAMMY Museum a year-long tribute to her father, in his centennial year. Celebration events include educational conferences, a touring exhibit and star-studded concerts that follow Woody's road from Oklahoma to New York and will culminate at the Kennedy Center in Washington, DC. For more information visit http://www.woody100.com/ 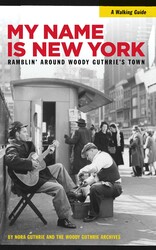