(c) Alan Benson
As one of Australia’s most celebrated and revered chefs, Christine Manfield has contributed enormously to the country’s collective table. An inquisitive cook, avid traveller, and perfectionist, Christine is inspired by global flavours as well as local and sustainable produce that supports both communities and the environment.

Having penned the hugely successful and award-winning cookbooks Tasting India, A Personal Guide to India and Bhutan, Dessert Divas, Fire, Spice, Stir, Paramount Cooking and Paramount Desserts, Christine’s influence has flavoured the kitchens of many keen home cooks for decades. One of Australia’s leading culinary ambassadors, her life as a restaurateur culminated in three award-winning restaurants in Australia and abroad: Paramount in Sydney (1993­­–2000), East@West in London (2003–2005), and Sydney’s Universal (2007– 2013). She continues to collaborate with chefs and industry colleagues hosting pop-up events across Australia, judging the delicious. Produce Awards, and is a mentor to Women in Hospitality (WOHO).

As a true explorer who is endlessly fascinated with the food traditions of diverse cultures, over the past 20 years Christine has hosted bespoke culinary adventures to destinations both in Australia and overseas, including India, Italy, South America, Bhutan, France, South East Asia, Spain, Morocco and New Zealand. But it’s her deep love and understanding of Indian cooking that she shares with readers here, in Indian Cooking Class. Drawing on her own extensive travels through the home, street and commercial kitchens of India’s distinct regions, Christine hopes this collection of approachable recipes will empower everyone to confidently enter and enjoy the layered world of Indian cooking. 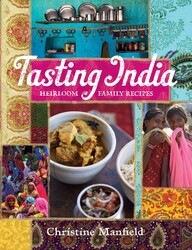