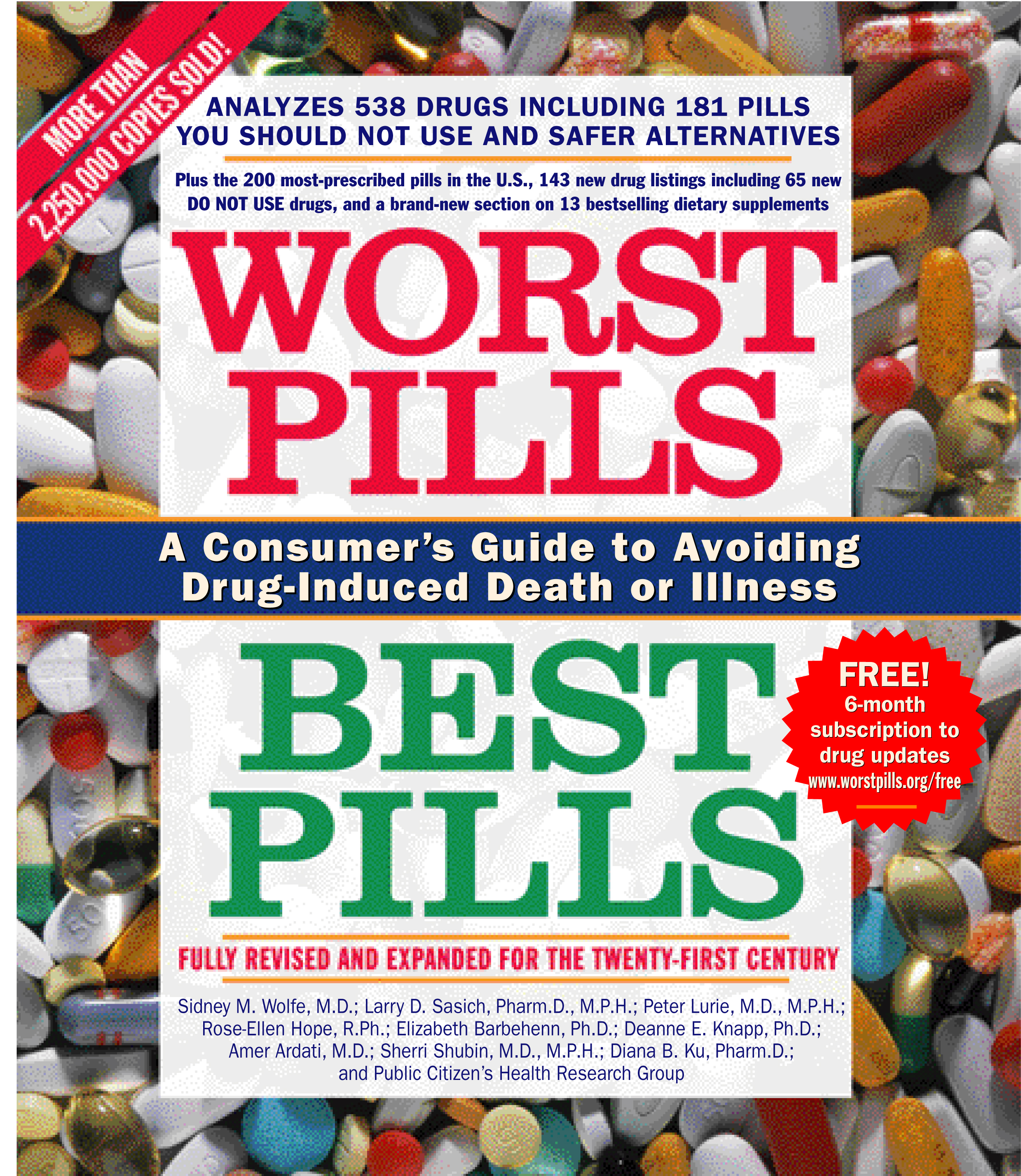 "More than 100,000 people a year die in American hospitals from adverse reactions to medication, making drug reactions one of the leading causes of death in this country, researchers are reporting today...."
-- Journal of the American Medical Association study, as quoted in The New York Times
It is no longer a secret that adverse drug reactions can be dangerous or even fatal, or that doctors often prescribe two relatively safe drugs -- which may cause a life-threatening interaction if taken together. THIS IS THE BOOK THAT TELLS YOU WHAT OTHER PILL BOOKS WON'T ABOUT YOUR MEDICATION!
Top-selling drugs that are among the 160 Do Not Use Drugs discussed inside:

Patients fill more than 80 million prescriptions a year for these drugs!
Consumer advocate Sidney M. Wolfe, M.D., director of Public Citizen's Health Research Group, has thoroughly revised and updated this accessible, indispensable bestseller that alerts you to the potential risks of hundreds of medications available today. Worst Pills, Best Pills gives you the information you need to become actively involved in caring for yourself -- by asking your doctor smart questions about the drugs prescribed for you. Arranged by disease/condition, it offers chapters on adverse drug reactions, alphabetical indexes listing pills by their brand and generic names, new information about commonly used drugs, guidelines for helping you to say "no" if your doctor prescribes a drug you should not take, and safer alternative choices. Worst Pills, Best Pills also includes startling information about certain drugs that can actually cause depression, hallucinations or psychoses, sexual dysfunction, dementia, auto accidents, insomnia, parkinsonism, and more.
Caution: Call your doctor before stopping the use of any drug.
CHAPTER ONE
MISPRESCRIBING AND OVERPRESCRIBING OF DRUGS: Evidence and Causes
The numbers are staggering: in 1997, an estimated 2.35 billion prescriptions were filled in retail drugstores in the United States. For those people who got at least one prescription filled, this amounts to an average of 11.6 prescriptions per person that year.
There is no dispute that for many people, prescriptions are beneficial, even lifesaving in many instances. But hundreds of millions of these prescriptions are wrong, either entirely unnecessary or unnecessarily dangerous. At the very least, misprescribing wastes tens of billions of dollars, barely affordable by many people who pay for their own prescriptions. But there are much more serious consequences. More than 1.5 million people are hospitalized and more than 100,000 die each year from largely preventable adverse reactions to drugs that should not have been prescribed as they were in the first place. What follows is a summary of the seven all-too-often-deadly sins of prescribing.
First: The "disease" for which a drug is prescribed is actually an adverse reaction to another drug, masquerading as a disease but unfortunately not recognized by doctor and patient as such. Instead of lowering the dose of the offending drug or replacing it with a safer alternative, the physician adds a second drug to the regimen to "treat" the adverse drug reaction caused by the first drug. Examples discussed in this book include drug-induced parkinsonism, depression, sexual dysfunction, insomnia, psychoses, constipation, and many other problems.
Second: A drug is used to treat a problem which, although in some cases susceptible to a pharmaceutical solution, should first be treated with common sense lifestyle changes. Problems such as insomnia and abdominal pain often have causes that respond very well to nondrug treatment, and often the physician can uncover these causes by taking a careful history. Other examples include medical problems such as high blood pressure, mild adult-onset diabetes, obesity, anxiety, and situational depression. Doctors should recommend lifestyle changes as the first approach for these conditions, rather than automatically reach for the prescription pad.
Third: The medical problem is both self-limited and completely unresponsive to treatments such as antibiotics or does not merit treatment with certain drugs. This is seen most clearly with viral infections such as colds and bronchitis in otherwise healthy children or adults.
Fourth: A drug is the preferred treatment for the medical problem, but instead of the safest, most effective -- and often least expensive -- treatment, the physician prescribes one of the 160 Do Not Use drugs listed in this book or another, much less preferable alternative. An example of a less preferable alternative would be a drug to which the patient has a known allergy that the physician did not ask about.
Fifth: Two drugs interact. Each on its own may be safe and effective, but together they can cause serious injury or death.
Sixth: Two or more drugs in the same therapeutic category are used, the additional one(s) not adding to the effectiveness of the first but clearly increasing the risk to the patient. Sometimes the drugs come in a fixed combination pill, sometimes as two different pills. Often heart drugs or mind-affecting drugs are prescribed in this manner.
Seventh: The right drug is prescribed, but the dose is dangerously high. This problem is seen most often in older adults, who cannot metabolize or excrete drugs as rapidly as younger people. This problem is also seen in small people who are usually prescribed the same dose as that prescribed to people weighing two to three times as much as they do. Thus, per pound, they are getting two to three times as much medicine as the larger person.
Evidence of Misprescribing and Overprescribing
Here are some examples from recent studies by a growing number of medical researchers documenting misprescribing and overprescribing of drugs:
Treating Adverse Drug Reactions -- as Diseases -- with Other Drugs
Researchers at the University of Toronto and at Harvard have clearly documented and articulated what they call the prescribing cascade. It begins when an adverse drug reaction is misinterpreted as a new medical condition. Another drug is then prescribed, and the patient is placed at risk of developing additional adverse effects relating to this potentially unnecessary treatment. To prevent this prescribing cascade, doctors -- and patients -- should follow what we call Rule 3 of the Ten Rules for Safer Drug Use: Assume that any new symptom you develop after starting a new drug might be caused by the drug. If you have a new symptom, report it to your doctor.
Some of the instances of the prescribing cascade that these and other researchers have documented include:

Patients
For too many patients, the system is stacked against you -- drug companies, doctors, and pharmacists are too often making decisions that ultimately derive from what is best for the drug companies, doctors, and pharmacists, and not necessarily from what is best for you. This book has been researched and written to help you come out ahead in the struggle with our health care industry.
In Chapter 2, concerning adverse drug reactions, you can learn which common medical problems -- depression, insomnia, sexual disorders, parkinsonism, falls and hip fractures, constipation, and many others -- can actually be caused by drugs. Once you recognize these problems, you can take care of yourself and your family and bring the problems to an end by discussing safer alternatives with your physician.
Chapter 3, the largest section of the book, discusses 456 drugs, including 160 that we and our consultants think you should not use. For each of these, we recommend safer alternatives. In addition, Chapter 3 lists hundreds of drug combinations that should not be used because of serious interactions.
Chapter 4 presents a detailed strategy, beyond information on specific adverse effects and drugs, to help you to use drugs more safely, including Ten Rules for Safer Drug Use and how to use and maintain your own Drug Worksheet for Patient, Family, Doctor and Pharmacist. This is your personalized plan for avoiding becoming a victim of overprescribing or misprescribing.
Chapter 5 discusses the latest information about generic drugs and shows you how and why you can and should save hundreds of dollars a year or more.
In short, this book is intended to help you and your family to improve your health by using drugs, if necessary, more carefully and recognizing those you should avoid.