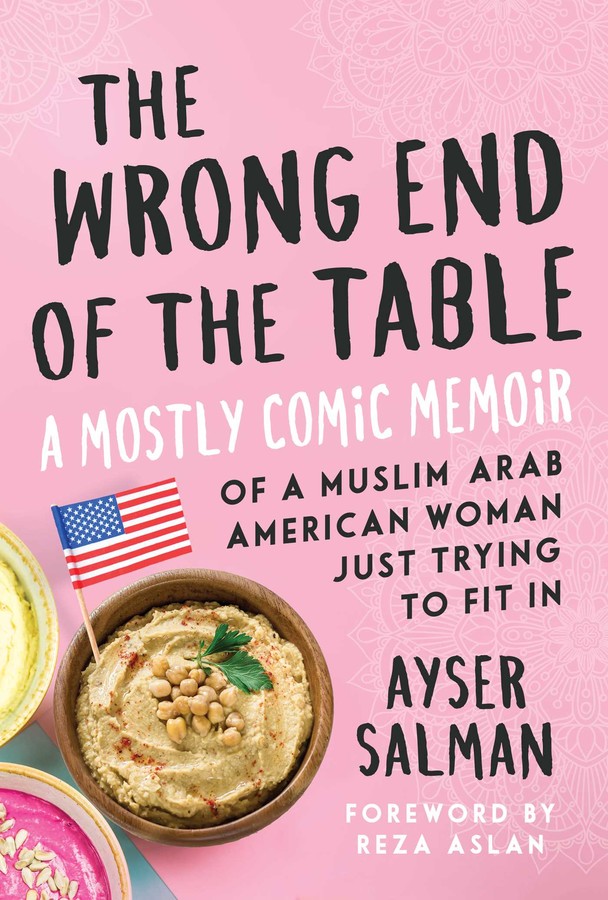 The Wrong End of the Table

"[A] rare voice that is both relatable and unafraid to examine the complexities of her American identity.” —Reza Aslan, #1 New York Times bestselling author of Zealot: The Life and Times of Jesus of Nazareth

You know that feeling of being at the wrong end of the table? Like you’re at a party but all the good stuff is happening out of earshot (#FOMO)? That’s life—especially for an immigrant.

What happens when a shy, awkward Arab girl with a weird name and an unfortunate propensity toward facial hair is uprooted from her comfortable (albeit fascist-regimed) homeland of Iraq and thrust into the cold, alien town of Columbus, Ohio—with its Egg McMuffins, Barbie dolls, and kids playing doctor everywhere you turned?

This is Ayser Salman’s story. First comes Emigration, then Naturalization, and finally Assimilation—trying to fit in among her blonde-haired, blue-eyed counterparts, and always feeling left out. On her journey to Americanhood, Ayser sees more naked butts at pre-kindergarten daycare that she would like, breaks one of her parents’ rules (“Thou shalt not participate as an actor in the school musical where a male cast member rests his head in thy lap”), and other things good Muslim Arab girls are not supposed to do. And, after the 9/11 attacks, she experiences the isolation of being a Muslim in her own country. It takes hours of therapy, fifty-five rounds of electrolysis, and some ill-advised romantic dalliances for Ayser to grow into a modern Arab American woman who embraces her cultural differences.

Part memoir and part how-not-to guide, The Wrong End of the Table is everything you wanted to know about Arabs but were afraid to ask, with chapters such as “Tattoos and Other National Security Risks,” “You Can’t Blame Everything on Your Period; Sometimes You’re Going to Be a Crazy Bitch: and Other Advice from Mom,” and even an open letter to Trump. This is the story of every American outsider on a path to find themselves in a country of beautiful diversity.

Ayser Salman was born in Iraq before it became a curiosity, and moved to America as a toddler. She is a writer and producer and editor for companies like Universal Pictures, Miramax Films, Disney, The Weinstein Company, and FX. Ayser lives in Los Angeles, California.

“The Wrong End of the Table is an insightful and enjoyable look at one of the most contested and misunderstood minorities in America today: Muslims. Through her own life story, Ayser Salman uses her experiences to distill not just Islam, but also the impact religion and culture have on how we interact and understand the world around us. What emerges is that rare voice that is both relatable and unafraid to examine the complexities of her American identity— as a minority, an immigrant, and a woman.”
—Reza Aslan, #1 New York Times bestselling author of Zealot: The Life and Times of Jesus of Nazareth

"Romantic struggles and strict immigrant parents inform a journey toward self-acceptance in this fast-paced, funny memoir by an Iraqi-born film editor and producer. . . . The chronological structure wears away as Salman gets older, leaving space for philosophical musings and slices of life: a heartfelt open letter to President Trump, a questioning of her Muslim practice, and a meditation on how long Iraqis take to say goodbye. . . .  Always funny, this enjoyable and heartfelt book is great for a plane, the beach, or a free afternoon."
—Publishers Weekly

"Laced in her offbeat takes about immigrant life, dating, and measuring up to her parents’ demands are vivid descriptions of what it is like to be a Muslim in America, including a letter to President Trump begging him not to turn the country she loves into the Iraq she left behind. Humorous and heartfelt, Salman’s story reflects the best—and worst—that her new country has to offer an outsider."
—Booklist

"[Salman's] charming, self-deprecating memoir is filled with stories and observations we’d all benefit from reading."
—HelloGiggles

"This hilarious and heartfelt memoir of feeling out of place in a new country is just what you need to help you laugh at your own misunderstandings."
—Book Riot

"Ayser Salman’s writing crackles with humor and insight. . . . Her hilarious, thought provoking, and insightful book should be required reading for President Donald Trump. Maybe someone on his staff could tweet him the chapters.”
—Matt Williams , writer, television producer, and creator of Home Improvement

“Ayser writes with such wittiness, you can’t help but be drawn into her hilarious yet deeply informative and moving personal account. A timely memoir and welcome antidote to fear and division."
—Amir Ahmad Nasr, author of My Isl@m

"The Muslim immigrant experience in the US is anything but funny. Yet, Ayser Salman relies on humor to express the trials and tribulations of the child of an Iraqi family, trying to ‘fit in,’ and carving her identity as an American Muslim. Her creative use of footnotes is hilarious, as she navigates between the world her parents left behind and her new home. Warm and funny, this read is joyful and heartwarming."
—Sabeeha Rehman, author of Threading My Prayer Rug. One Woman’s Journey From Pakistani Muslim To American Muslim.

"Ayser Salman’s memoir of life as an Iraqi immigrant in the U.S. is one full of information and insights into Islam, often delivered with humor and candor. In the current political climate, this 'how-not-to guide' provides the reader with everything they wanted to know about Arab people but were afraid to ask."
—Ms. Magazine

"Salman’s voice is at once witty and brave in the face of her fish-out-of-water childhood. A refreshing and indefatigable spirit runs through every page."
—Tina Alexis Allen, author of Hiding Out: A Memoir of Drugs, Deception, and Double Lives

"Ayser's stories of growing up will make you wish you were a part of her family, and after you read this book, you sort of will be! She’s that honest and inviting. Oh, and she’s funny! Very very funny."
—Ellen Sandler, co-executive producer of Everybody Loves Raymond and author of The TV Writer’s Workbook

"Ayser Salman has written an important book, especially pertinent in today’s political climate, and has done so with humor and heart.”
—Cathy Ladman, comedian, actor, and writer, I’m Dying up Here

"This is an unflinching examination of the complex mix that is childhood, identity, and coming of age in America. Salman narrates these often comic intersections with the warmth of someone confiding to her close friends."
—AudioFile

The Wrong End of the Table