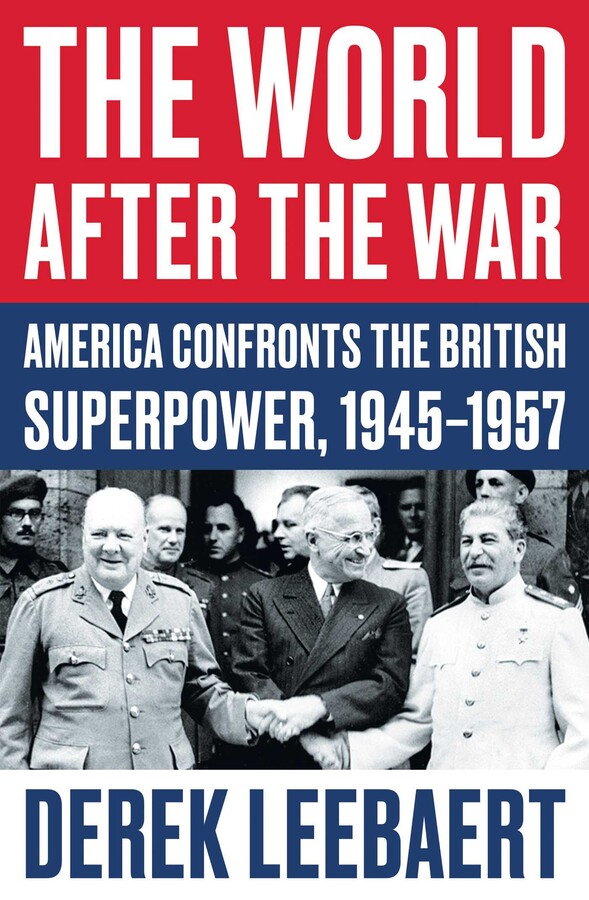 The World After the War

One of the great myths of the twentieth century is that after the Second World War Britain simply relinquished its power and America quickly embraced its worldwide political and military commitments. Instead the two allies improvised an uneasy, shifting partnership for twelve long years while most of western Europe lay in turmoil and Russia grew more aggressive.

But in 1957 Washington issued a ‘declaration of independence’ from British authority. It was then that everything changed, and America assumed leadership of the new world order just taking shape.

Derek Leebaert spins a riveting global narrative of Britain as the original superpower and shows why the Americans kept believing it to be indispensable. It’s the story of secret ties, diplomatic quarrels and military interventions that casts political giants Churchill, Truman, Eisenhower and Johnson in a new light. In a volatile world of decolonisation, a uniting Europe and the Suez Crisis, shrewd men in London were leveraging the empire’s long-established resources and influence to maintain their grip on power.

The enduring notion of a special relationship, rising tensions with Russia and China, and the sources of much of the world’s turmoil can’t be understood without knowing what really occurred.

‘One of the most thoughtful books on the Cold War period that has come my way.’

‘Fascinating…far from just another story of the British empire’s recession.’

‘Important and engaging… Leebaert aims to give a deathblow to the myth of “hands across the sea”… Riveting.’

‘Leebaert’s emphasis is necessary to demolish the common notion that after 1945 a “bankrupt” Britain and its empire faded from the scene, leaving the United States to become “the world’s policeman.” The idea that a Washington-led world order snapped into place immediately after the war is accepted by any number of renowned historians. Leebaert’s thesis should send everyone back to the original sources.’

‘A brilliant achievement that challenges what we thought we knew about the power imbalance between post-war Britain and the US, the “superpower” that emerged in 1945 – written with intelligence, lucidity and a breathtaking width of knowledge.’

‘A fascinating and provocative account…rich with revealing details, anecdotes and brilliantly wrought portraits of the key personalities.’

– Liaquat Ahamed, author of the Pulitzer Prize-winning Lords of Finance

‘In The World After the War, Derek Leebaert offers what for many readers will be a challenging thesis: that in 1945, the United States was hesitant about taking on the mantle of Leader of the Free World, which it later embraced; moreover, in 1945, Great Britain retained the substance and profile of that anachronistic description, a superpower. Only in 1956, after the Suez Crisis, did the US emerge as the Lone Ranger of the planet. Unfortunately, it was not always terribly successful in this guise, as the author argues in this impressively researched book.’

– Kathleen Burk, author of The Lion and the Eagle: The Interaction of the British and American Empires 1783–1972

‘Leebaert is a Cold War historian of the first rank as well as a spellbinding narrator. But his greatest virtue…is a dogged pursuit of what really happened even, or especially, when it contradicts conventional wisdom.’

‘A nation in decline that persists in imagining itself indispensable is a menace to itself and to others. So it was with Great Britain after World War II. So too it is with the United States today. With sparkling prose and deft characterizations, Derek Leebaert examines the relationship between those two countries – the one on the way down, the other reaching its zenith – in the first decade of the postwar era. The result is both revealing and immensely instructive. This is historical revisionism of the very best sort.’

The World After the War