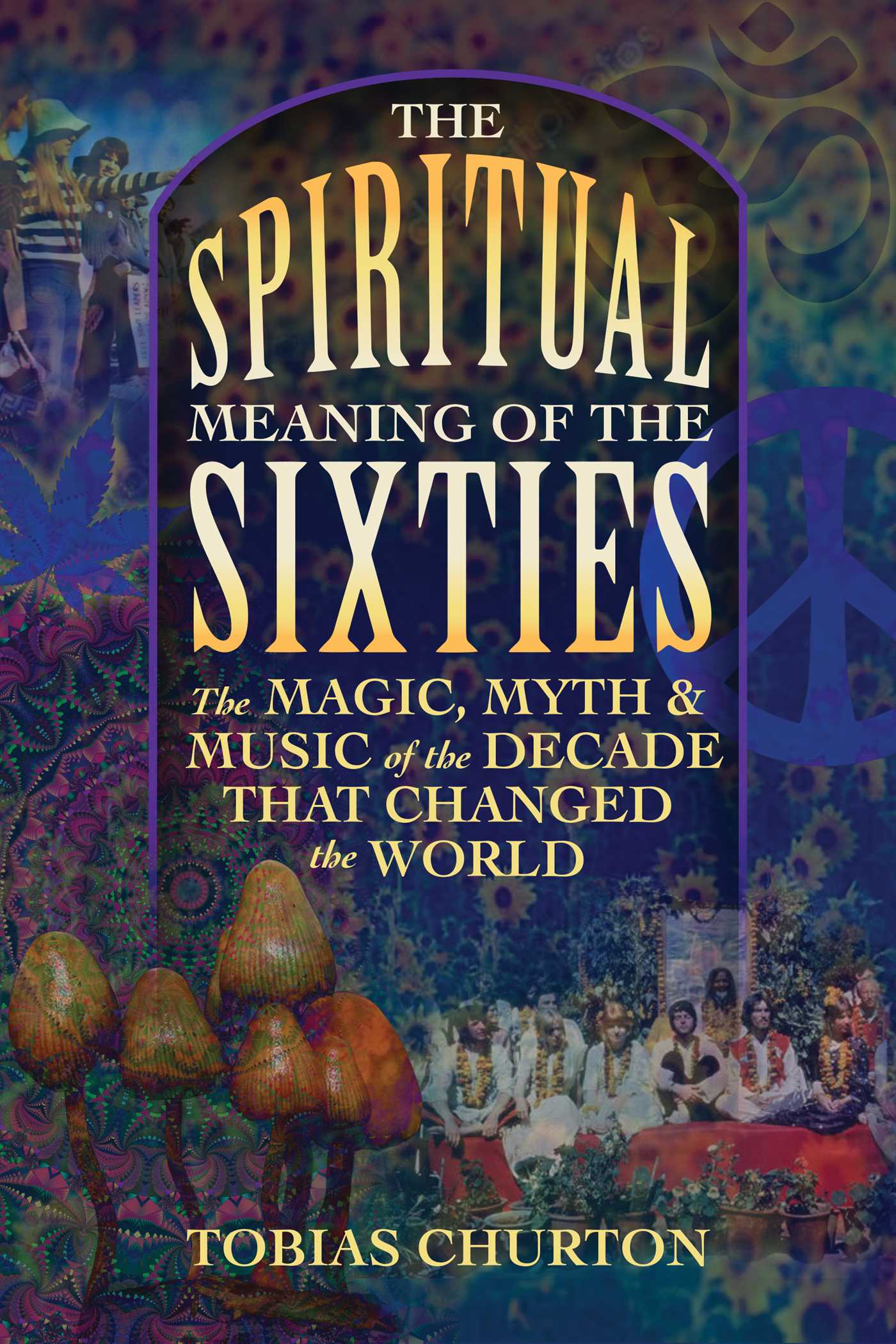 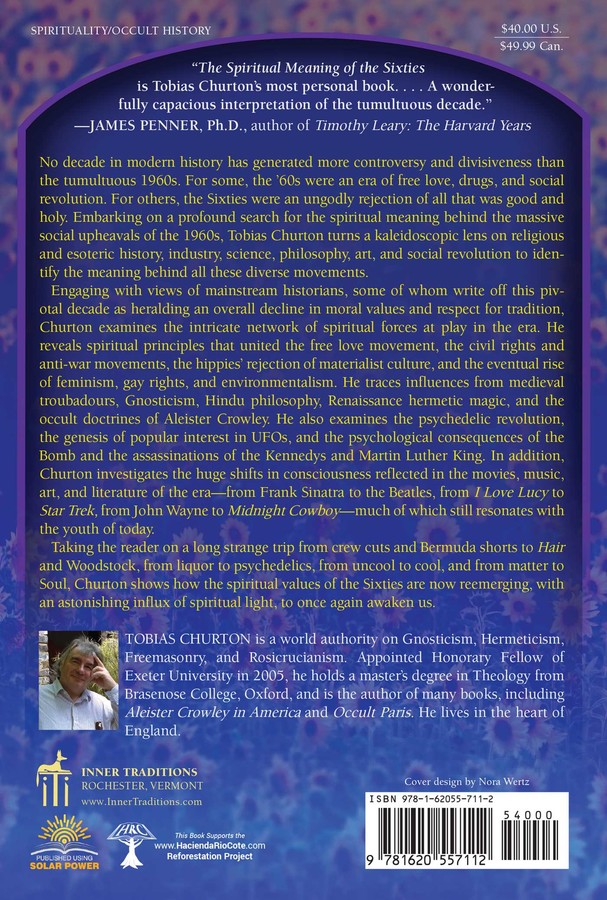 The Spiritual Meaning of the Sixties

The Magic, Myth, and Music of the Decade That Changed the World

Unveils the spiritual meaning that fueled the artistic, political, and social revolutions of the 1960s

No decade in modern history has generated more controversy and divisiveness than the tumultuous 1960s. For some, the ‘60s were an era of free love, drugs, and social revolution. For others, the Sixties were an ungodly rejection of all that was good and holy. Embarking on a profound search for the spiritual meaning behind the massive social upheavals of the 1960s, Tobias Churton turns a kaleidoscopic lens on religious and esoteric history, industry, science, philosophy, art, and social revolution to identify the meaning behind all these diverse movements.

Engaging with views of mainstream historians, some of whom write off this pivotal decade as heralding an overall decline in moral values and respect for tradition, Churton examines the intricate network of spiritual forces at play in the era. He reveals spiritual principles that united the free love movement, the civil rights and anti-war movements, the hippies’ rejection of materialist culture, and the eventual rise of feminism, gay rights, and environmentalism.
​
Taking the reader on a long strange trip from crew-cuts and Bermuda shorts to Hair and Woodstock, from liquor to psychedelics, from uncool to cool, and from matter to Soul, Churton shows how the spiritual values of the Sixties are now reemerging, with an astonishing influx of spiritual light, to once again awaken us.
Chapter Fifteen

The Spiritual in Art in the Sixties: The Age of Space

Andy Warhol (1928-1987) is not a figure one automatically associates with the spiritual in art in the Sixties, but since his untimely death in 1987, Warhol’s spiritual beliefs and the importance to him personally of his religious upbringing have become a little more widely appreciated.

Raised in Pittsburgh, the Warhol family (originally ethnic Lemkos from what is now northeast Slovakia) attended the Saint John Chrysostom Byzantine (or Ruthenian) Church, an experience whose icons, liturgical music, ritual, and vestments left a lifelong impact. Though using the Byzantine Rite of the Eastern Orthodox Church, the Ruthenian Church was fully recognized by the Roman Catholic Church. Warhol made regular Mass attendances at the Catholic Saint Vincent Farrer church in Manhattan, sitting at the back, and volunteered at New York’s homeless shelters during the busiest times. I rather think that perhaps only a person who had built his inner life on spiritual foundations could have withstood the many outlandish tremors of his “Factory” life in the Sixties and Seventies without going crazy.

Warhol’s silkscreen diptych Marilyn is probably Warhol’s most, forgive me, “iconic” work, and was first rolled off the process in August 1962, just after Marilyn died in suspicious circumstances a day before Warhol’s thirty-fourth birthday. This might give us a clue to what we ought to mean when we use that very much abused and distorted adjective “iconic.”

Warhol’s church experience was one of the richness of Eastern orthodox architecture. The congregation communicants were used to seeing the saints of the Church in painted portraits surrounded by ornate gold decoration. The paintings were called by the Greek word “icons” (Greek ikōn, an “image” or reflection). These images have a special meaning. When one gazes on a religious icon, one is not worshipping the “image.” That would be idolatry, that is, to place an image before the worship of God. Rather one is enjoined to look spiritually through the image, and pray through the image to the spiritual mystery that the image points toward, inwardly toward, as a sign. The sign is the outer manifestation of an inward reality, a reality that is wholly spiritual, eternal. The icon calls us out of this world and toward the kingdom of God. The individual saint is a being who has brought the light of that kingdom to humankind in such a way that their lives have become a sign to the faithful. An “icon” then, is not simply what we have come to know as an image. It is a visual sacrament.

There seems to me no doubt that Warhol was making an ironic comment, and also a sympathetic, perhaps pitying comment, on the materialism of the predominant culture of the United States, very much in tune with his ironic recognition of commercial art as “art” in the fullest sense nonetheless, if we choose to see it that way. The point about commercial art is that it defies originality insofar as it is mere “image reproduced,” duplicated, or as we say now “cloned.”

However, when we come to the silkscreen image of Marilyn we are seeing two things. First, we are seeing Andy Warhol’s personal response to the undoubtedly tragic demise of the Hollywood “sex goddess,” who was nonetheless a living person, a living, enchanting, troubled soul, and not an image at all. He is elevating her memory by turning her manipulated image from the grip of Hollywood image-manipulators to art, while also saying that all we have now of Marilyn is an image, what passes in an unspiritual world as an “icon,” reproducible and disposable. Life has been lost, and yet the image of Marilyn will go on and on, reproduced on film, in magazines, in the imagination, and so on.

Warhol perhaps has even glimpsed something of the transcendent nature of Marilyn’s personal struggle through life. She said shortly before her death that all she and artists like herself wanted was a chance to twinkle, to reveal the inner star, not merely the outer glamor. She felt the image of Marilyn as something suffocating. Now the world would be plastered with that image.

Clearly, Warhol has been struck by the inverse resonance of the Hollywood image with that of the genuine icon. A genuine icon is a window into heaven. The Hollywood image is a commercial image, superficial, often gaudy, essentially flat, but always spiritually opaque. No light is going to flow through this image to the devoted. The image in cinema is projected onto a screen (a silvery or silvered screen to encourage reflection, not penetration).

I think we do the true icon and Andy Warhol immense disservice when we copy the oft-heard word “iconic” and apply it to this and that reproduced picture, object, or individual. As vulgarly employed today, “iconic” is simply a misleading double for “famous” or “well-known” or “powerful.” Today we hear about a performance being “iconic,” a film being “iconic,” a photo being “iconic.” They are simply images that are reproduced and commonly familiar, and that was inherent to Warhol’s “icons” of the famous. (Remember his famous statement on the transience of democratic fame--everyone will be famous for fifteen minutes--the empty transience of the publicly distributed “selfie”; here today, gone tomorrow. It would only be a matter of time before the “star” him- or herself wanted a silkscreen, not as an ironic comment on their “star-value” or fame and cultural prominence, but as a hip portrait, as their image turned into art by the magician artist Andy Warhol. He would be happy to oblige. One can see the wisdom of the act, for spiritual things are spiritually discerned. Warhol was exposing, even profitably and commercially exposing, reflecting modern life back to itself through the artistic prism of genius.
Tobias Churton

Tobias Churton is Britain’s leading scholar of Western Esotericism, a world authority on Gnosticism, Hermeticism, and Rosicrucianism. He is a filmmaker and the founding editor of the magazine Freemasonry Today. An Honorary Fellow of Exeter University, where he is faculty lecturer in Rosicrucianism and Freemasonry, he holds a master’s degree in Theology from Brasenose College, Oxford, and created the award-winning documentary series and accompanying book The Gnostics, as well as several other films on Christian doctrine, mysticism, and magical folklore. The author of many books, including Gnostic Philosophy, The Invisible History of the Rosicrucians, and Aleister Crowley: The Beast in Berlin, he lives in England.

“The Spiritual Meaning of the Sixties is Tobias Churton’s most personal book. . . . A wonderfully capacious interpretation of the tumultuous decade.”

"All in all, Churton has written a fascinating and important book, and it is a must-read for any reader with an interest in the 60's or contemporary culture generally."

The Spiritual Meaning of the Sixties

The Magic, Myth, and Music of the Decade That Changed the World