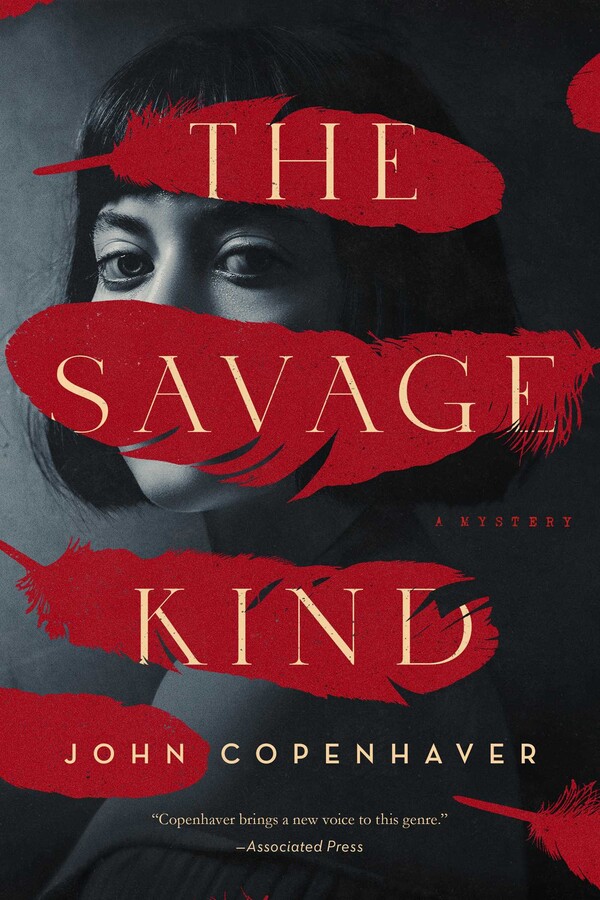 Two lonely teenage girls in 1940s Washington, DC, discover they have a penchant for solving crimes—and an even greater desire to commit them—in the new mystery novel by Macavity Award-winning novelist John Copenhaver.

Philippa Watson, a good-natured yet troubled seventeen-year-old, has just moved to Washington, DC. She’s lonely until she meets Judy Peabody, a brilliant and tempestuous classmate. The girls become unlikely friends and fashion themselves as intellectuals, drawing the notice of Christine Martins, their dazzling English teacher, who enthralls them with her passion for literature and her love of noirish detective fiction.

When Philippa returns a novel Miss Martins has lent her, she interrupts a man grappling with her in the shadows. Frightened, Philippa flees, unsure who the man is or what she’s seen. Days later, her teacher returns to school altered: a dark shell of herself. On the heels of her teacher’s transformation, a classmate is found dead in the Anacostia River—murdered—the body stripped and defiled with a mysterious inscription.

As the girls follow the clues and wrestle with newfound feelings toward each other, they suspect that the killer is closer to their circle than they imagined—and that the greatest threat they face may not be lurking in the halls at school, or in the city streets, but creeping out from a murderous impulse of their own.

John Copenhaver is the author of Dodging and Burning, which won the Macavity Award for Best First Mystery Novel and garnered Anthony, Strand Critics, Barry, and Lambda Literary Award nominations. Copenhaver writes a crime fiction review column for Lambda Literary called “Blacklight,” is a co-host on the House of Mystery Radio Show, and is the six-time recipient of Artist Fellowships from the Washington, DC, Commission on the Arts and Humanities. He’s a Larry Neal awardee, and his work has appeared in CrimeReads, Electric Lit, Glitterwolf, PANK, New York Journal of Books, Washington Independent Review of Books. He lives in Richmond, VA, with his husband, artist Jeffery Paul.

"Fans like me of John Copenhaver’s debut novel Dodging and Burning will be thrilled with The Savage Kind which, like its predecessor, wraps a page-turning story in elegant prose. Once again, in Judy and Philippa, he has created compelling and morally complex characters who are both appealing and appalling. The Savage Kind is an exciting and riveting tale told by one of crime fiction’s emerging talents."

"Clever girls with dark leanings... powerful DC families hiding dangerous secrets... The Savage Kind is a new take on femme fatales in a dazzling 1940s noir wrapper. Copenhaver will have you guessing till the very last page."

– Alma Katsu, author of Red Widow and The Deep

"John Copenhaver’s dark sparkler of second novel, The Savage Kind, tantalizes from its first pages. With rich period detail and a sneaky subversion of storied noir tropes, it brings to life the delicious intricacies of teen female friendship and the slippery line between identification and desire, between desire and desperation."

"John Copenhaver has managed to unmask one of literature’s most elusive and underrepresented psyches: the evolving teenage girl. While fictional young women are often presented as harmless caricature, Copenhaver’s dual heroines crackle with a burgeoning anger and sense of self.  As with other unreliable narrators – Humbert Humbert in Lolita; Mary Katherine in We Have Always Lived in the Castle – warning signs are dropped early that you should not be taken in, that you should keep your guard up.  The story is so alluring that you soon forget the warning signs and plunge headlong into the thicket."

"The Savage Kind is a superbly multi-layered mix of a dizzyingly twisty murder mystery, a poignant coming-of-age love story, and a psychologically astute exploration of the blurry lines between infatuation, love, and obsession. John Copenhaver is in top form, using an inventive structure to create a haunting and wonderfully atmospheric page-turner. I loved this book."

"Copenhaver has crafted a tangle of mysteries as beautifully woven as a spider’s web. Ominous asides hint at the darker story to come: false identities, forbidden liaisons, and murderous family secrets. Nothing can be guessed because nothing is as it seems, except the affection between the two friends who team up to solve a classmate’s death. An enthralling, genre-bending read from the first word to the last."

– Timothy Jay Smith, author of Fire on the Island

"Wow. The Savage Kind is evocative, seductive and rivetingly creepy. John Copenhaver proves he is a brilliant talent, and this gorgeously unsettling story of power, control, gaslighting, and murder is not to be missed."

“Copenhaver’s tale unfolds via breathless diary entries from both girls, strung together by an anonymous narrator in 1963. A profusion of devastating twists complements the pulp-noir tone and keeps readers on tenterhooks, and a tentative romance between Judy and Philippa adds depth. Megan Abbott fans, take note.”

Praise for Dodging and Burning:

“A riveting debut. The intricate plot melds a coming-of-age story, a coming-out tale and a mystery with realistic characters who want to be accepted for themselves. The brisk pace is augmented by the character studies and an in-depth look at gay rights. Copenhaver brings a new voice to this genre with Dodging and Burning.”

“Copenhaver makes a powerful debut with this unconventional novel that mixes a coming-of-age tale with a puzzling mystery and a haunting portrait of the experiences of the LGBTQ community in the 1940s.”

“Complex and multilayered, Copenhaver’s outstanding debut combines a murder mystery with a coming-of-age tale. Copenhaver’s darkly lyrical exploration into the consequences of war?and prejudice?in small-town America will resonate with readers long after the last page is turned.”

“LGBTQ crime-writing has its heroes. John Copenhaver lists many of them. He may have to add himself to that list now.”

“The level of detail in [Copenhaver’s] novel Dodging and Burning displays in full measure the demanding research required to uncover the hidden history of a community marginalized and rendered virtually invisible for much of the twentieth century.”

“Set in 1945, Dodging and Burning is a striking and important debut illuminating the twin traumas of war and repressed sexual identity. A beautifully rendered literary mystery centered around a missing girl and a WWIII photographer’s journey toward adulthood and self-acceptance, the novel keeps you guessing until the very end.”

“The mystery also becomes an examination of gay life in the 1940s. The setting is well realized, and, interestingly, in its diction and syntax, the book reads as if it might itself have been written in the 1940s.”

“Dodging and Burning is a beautifully rendered coming of age story, a compelling exploration of a young man’s struggle with his sexual identity amid the evils of war, and an impeccably executed crime novel that keeps you guessing and ultimately strikes a deep and resounding emotional cord.”