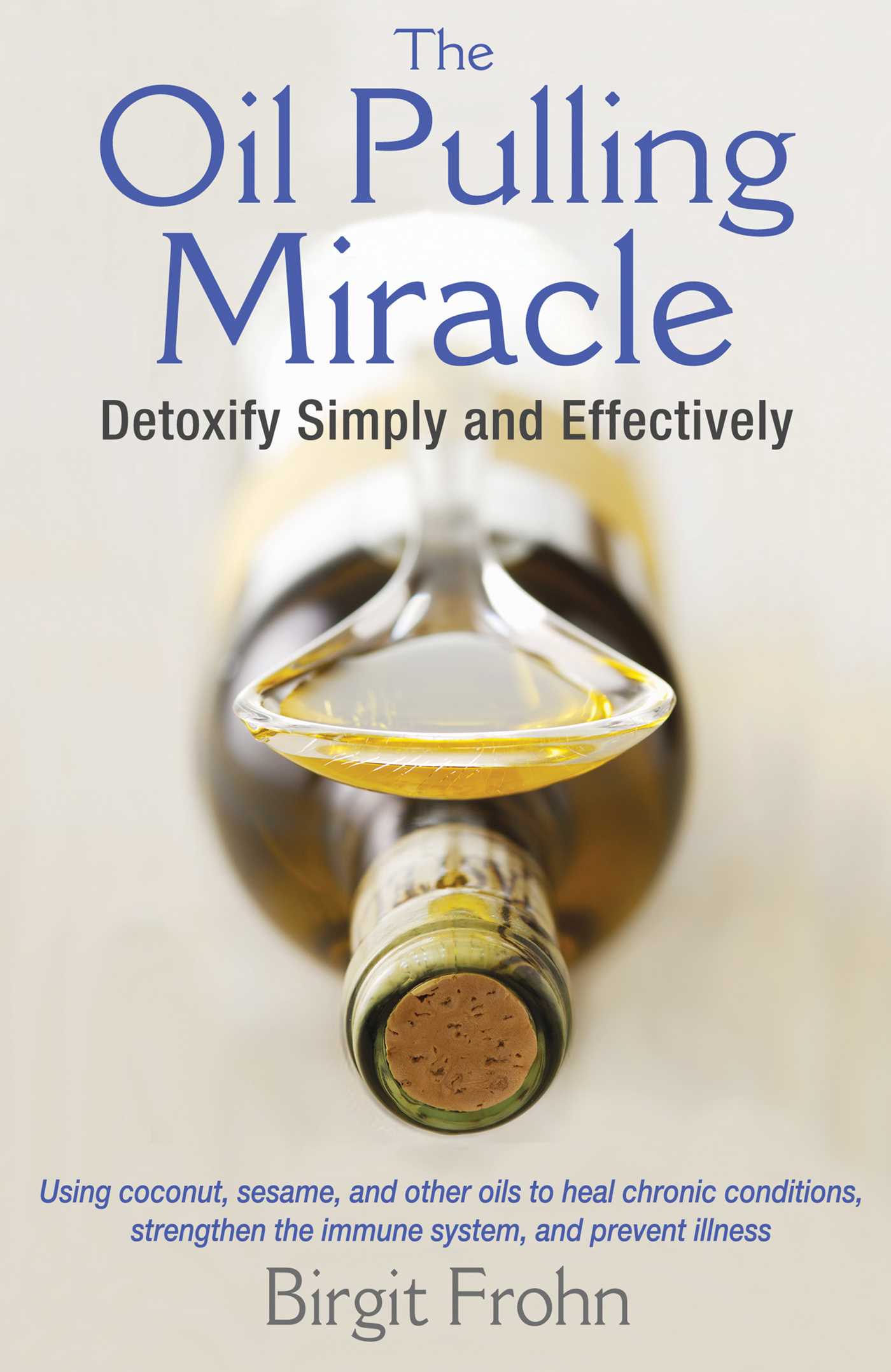 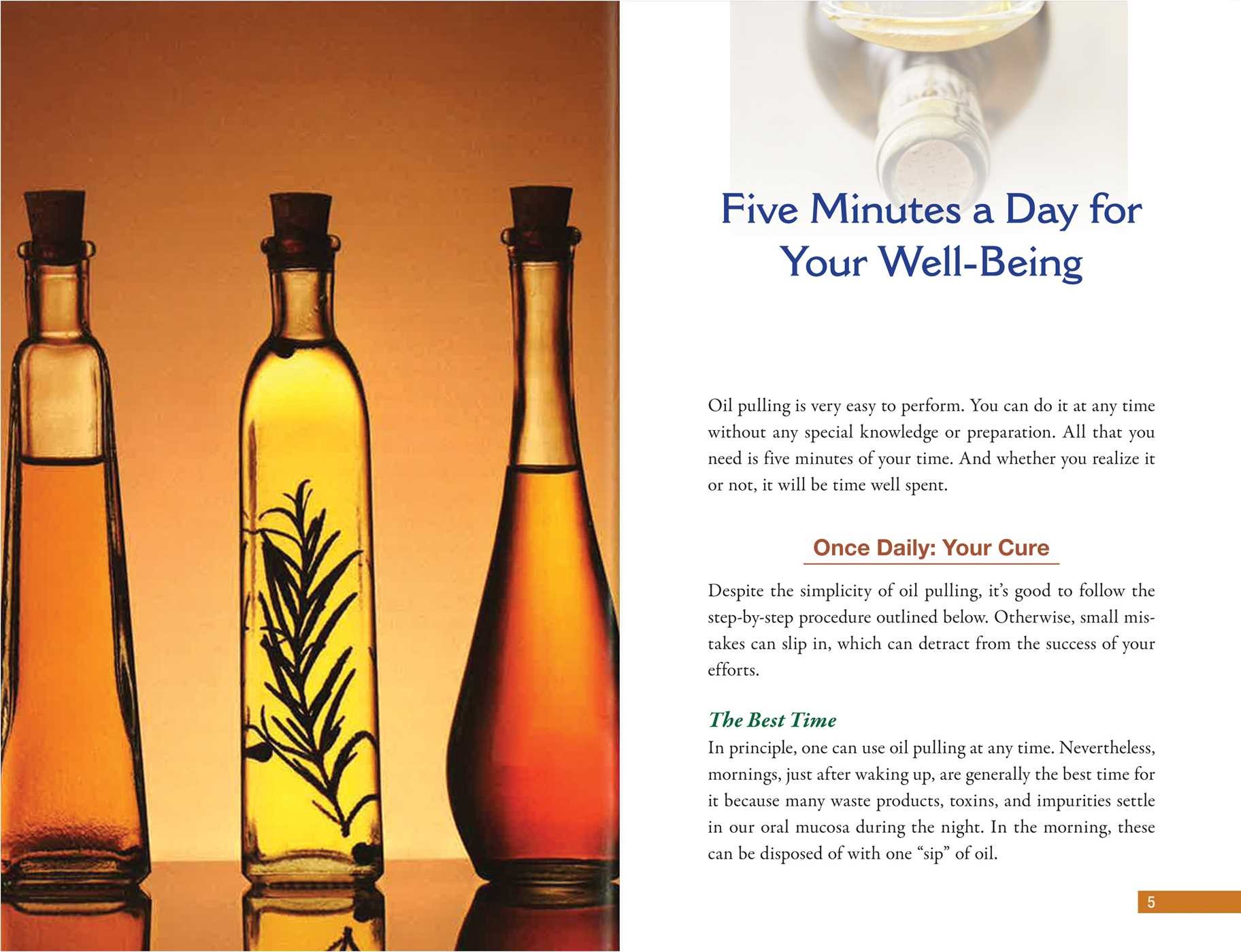 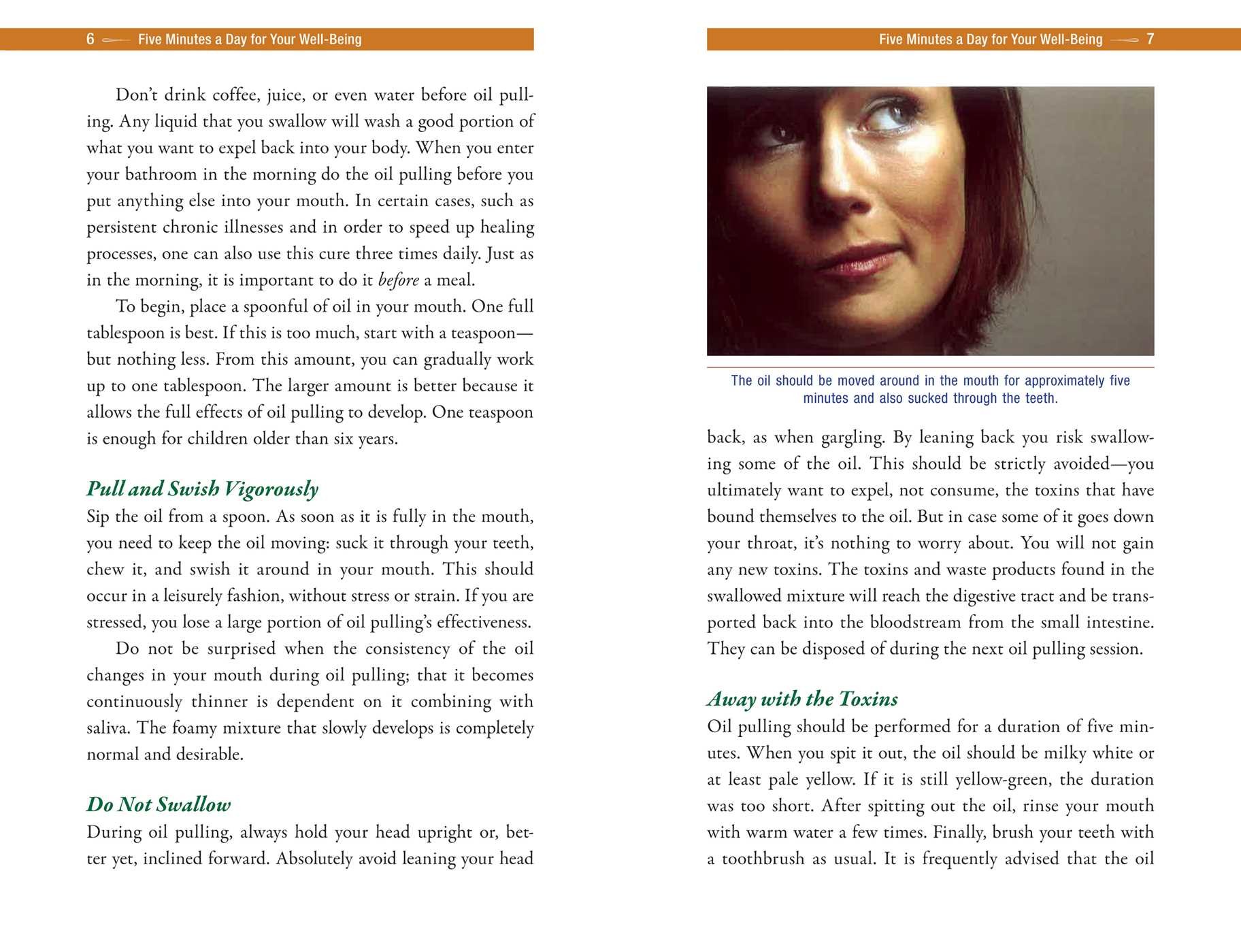 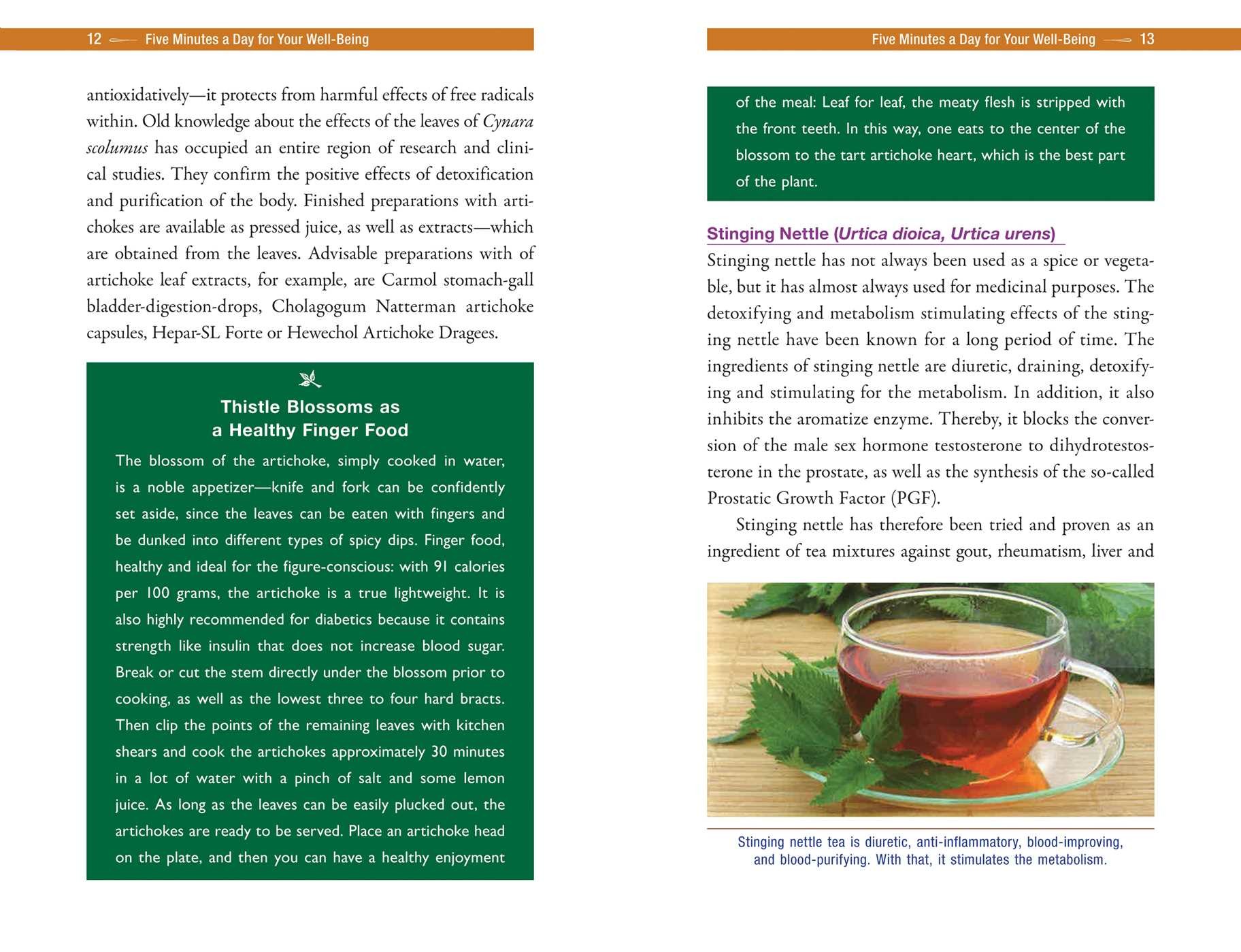 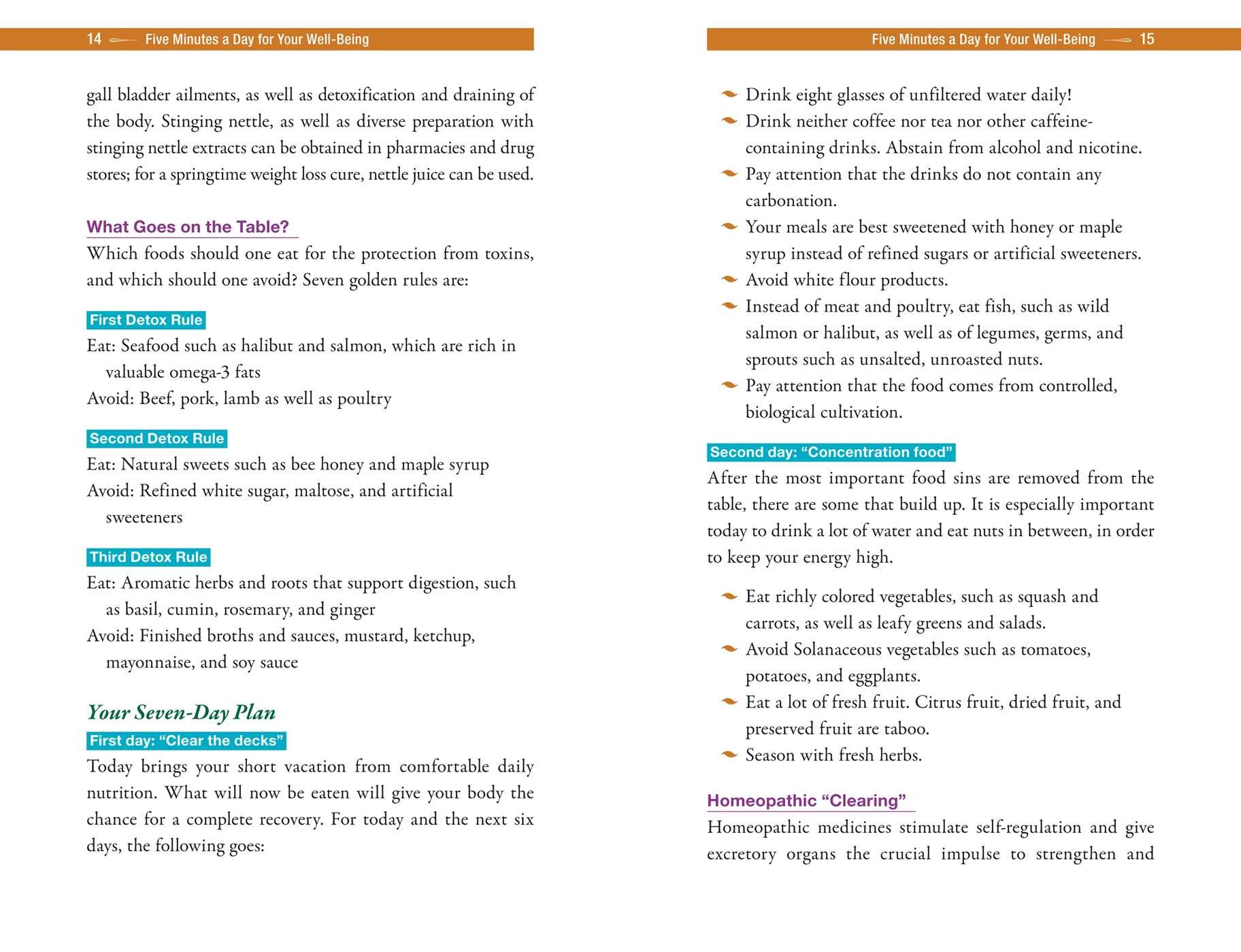 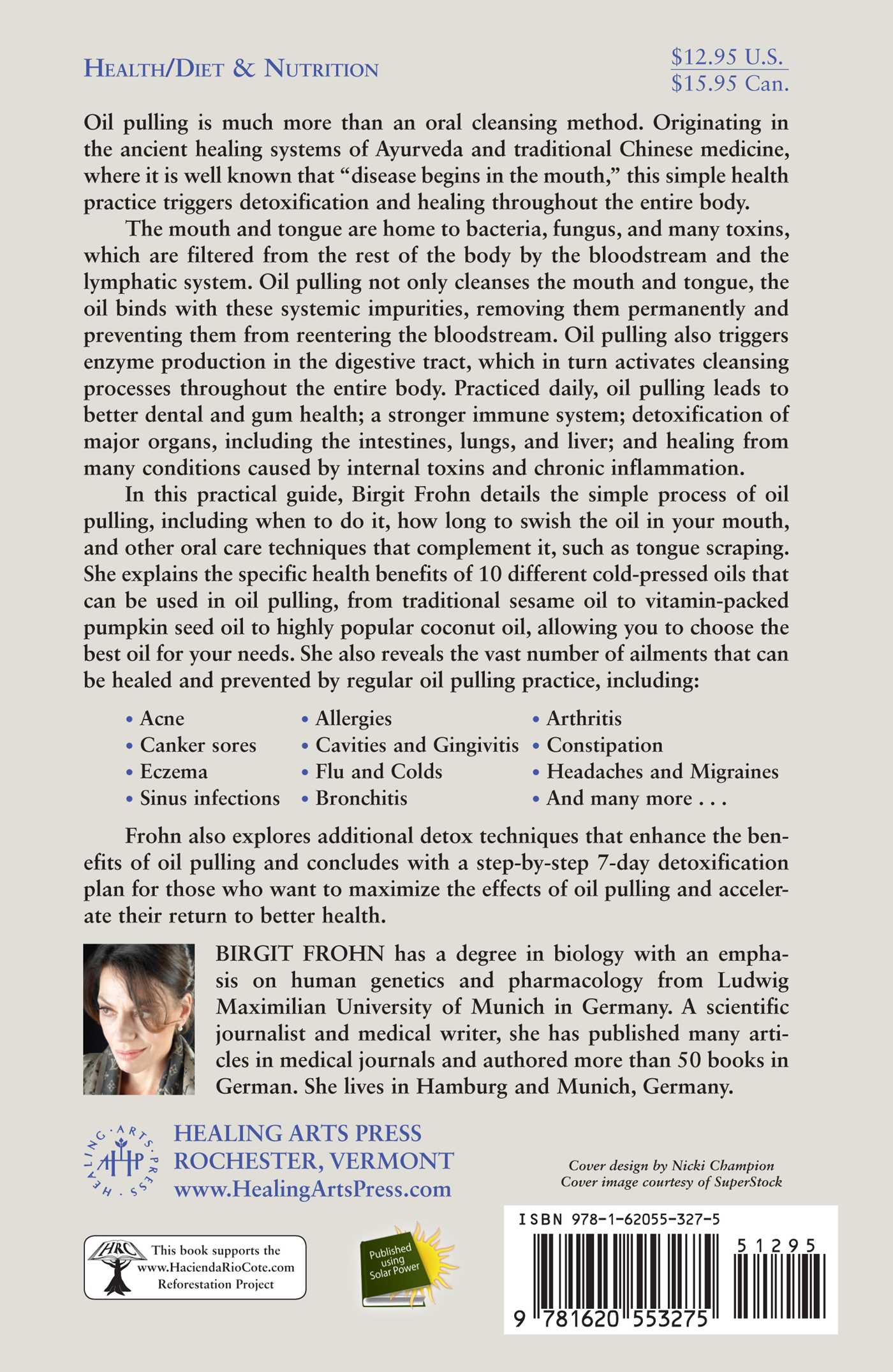 Oil pulling is much more than an oral cleansing method. Originating in the ancient healing systems of Ayurveda and traditional Chinese medicine, where it is well known that disease begins in the mouth, this simple health practice triggers detoxification and healing throughout the entire body. The mouth and tongue are home to bacteria, fungus, and many toxins from the rest of the body. Oil pulling not only cleanses the mouth and tongue, preventing harmful bacteria and toxins from entering the bloodstream, it also triggers enzyme production in the digestive tract, which in turn activates cleansing processes throughout the entire body. Practiced daily, oil pulling leads to better dental and gum health, a stronger immune system, detoxification of major organs including the intestines, lungs, and liver, and healing from many conditions caused by internal toxins and chronic inflammation.
Five Minutes a Day for Your Well-Being

Oil pulling is very easy to perform. You can do it at any time without any special knowledge or preparation. All that you need is five minutes of your time. And whether you realize it or not, it will be time well spent.

Once Daily: Your Cure

Despite the simplicity of oil pulling, it’s good to follow the step-by-step procedure outlined below. Otherwise, small mistakes can slip in, which can detract from the success of your efforts.

The Best Time
In principle, one can use oil pulling at any time. Nevertheless, mornings, just after waking up, are generally the best time for it because many waste products, toxins, and impurities settle in our oral mucosa during the night. In the morning, these can be disposed of with one “sip” of oil.

Don’t drink coffee, juice, or even water before oil pulling. Any liquid that you swallow will wash a good portion of what you want to expel back into your body. When you enter your bathroom in the morning do the oil pulling before you put anything else into your mouth. In certain cases, such as persistent chronic illnesses and in order to speed up healing processes, one can also use this cure three times daily. Just as in the morning, it is important to do it before a meal.

To begin, place a spoonful of oil in your mouth. One full tablespoon is best. If this is too much, start with a teaspoon--but nothing less. From this amount, you can gradually work up to one tablespoon. The larger amount is better because it allows the full effects of oil pulling to develop. One teaspoon is enough for children older than six years.

Pull and Swish Vigorously
Sip the oil from a spoon. As soon as it is fully in the mouth, you need to keep the oil moving: suck it through your teeth, chew it, and swish it around in your mouth. This should occur in a leisurely fashion, without stress or strain. If you are stressed, you lose a large portion of oil pulling’s effectiveness.

Do not be surprised when the consistency of the oil changes in your mouth during oil pulling; that it becomes continuously thinner is dependent on it combining with saliva. The foamy mixture that slowly develops is completely normal and desirable.

Do Not Swallow
During oil pulling, always hold your head upright or, better yet, inclined forward. Absolutely avoid leaning your head back, as when gargling. By leaning back you risk swallowing some of the oil. This should be strictly avoided--you ultimately want to expel, not consume, the toxins that have bound themselves to the oil. But in case some of it goes down your throat, it’s nothing to worry about. You will not gain any new toxins. The toxins and waste products found in the swallowed mixture will reach the digestive tract and be transported back into the bloodstream from the small intestine. They can be disposed of during the next oil pulling session.

Away with the Toxins
Oil pulling should be performed for a duration of five minutes. When you spit it out, the oil should be milky white or at least pale yellow. If it is still yellow-green, the duration was too short. After spitting out the oil, rinse your mouth with warm water a few times. Finally, brush your teeth with a toothbrush as usual. It is frequently advised that the oil should be spat into the toilet bowl, because it is the usual repository for bodily waste. You can spit the oil into the sink as well. You should then quickly clean it, since the discarded fluid contains a multitude of toxins.

Duration of the Oil Pulling Cure
To truly realize a noticeable effect one needs to perform oil pulling daily for at least one week. It generally takes four to six weeks before the full effects of oil pulling can be seen and can have a positive impact on all levels. It is therefore useful to complete an oil pulling treatment for approximately six weeks during the early spring and fall. However, this does not mean that oil pulling should not be done daily. Many people who have done this for years swear by it.

Chronic illnesses, from which one has suffered for a long period of time, require more patience. Ultimately, long-term health problems cannot be cured from one day to the next--oil pulling cannot do that. During the treatment of chronic illnesses with oil pulling, it can sometimes take a year for full relief or healing to set in.

As a rule of thumb, the following signs show how long you need to carry out the oil pulling cure: You should be able to sleep well and have a good appetite. When you wake up in the morning you should feel rested and refreshed and your eyes should be free of “sand.” Keep up the oil pulling until you reach these benchmarks.

You Might Feel Worse at First
Immediately after starting oil pulling, a cleansing crisis can occur. You may experience deterioration in your current condition or worsening of the symptoms of an existing ailment. This should be seen as a positive sign. The initial and temporary deterioration shows that the detoxification process has begun in the body. This initial worsening is certainly not a reason for worry and should not lead you to stop the practice; on the contrary, the initial decline shows that you are on the right track.

When the detoxification gets underway and the body can finally rid itself of harmful contaminants, the following ailments sometimes occur on a temporary basis.

Birgit Frohn has a degree in biology with an emphasis on human genetics and pharmacology from Ludwig Maximilian University of Munich in Germany. A scientific journalist and medical writer, she has published many articles in medical journals and authored more than 50 books in German. She lives in Hamburg and Munich, Germany.

“I found this book to be very informative without being too technical. It contains many simple techniques for maintaining health and preventing illness, which can be easily incorporated into daily routines.”