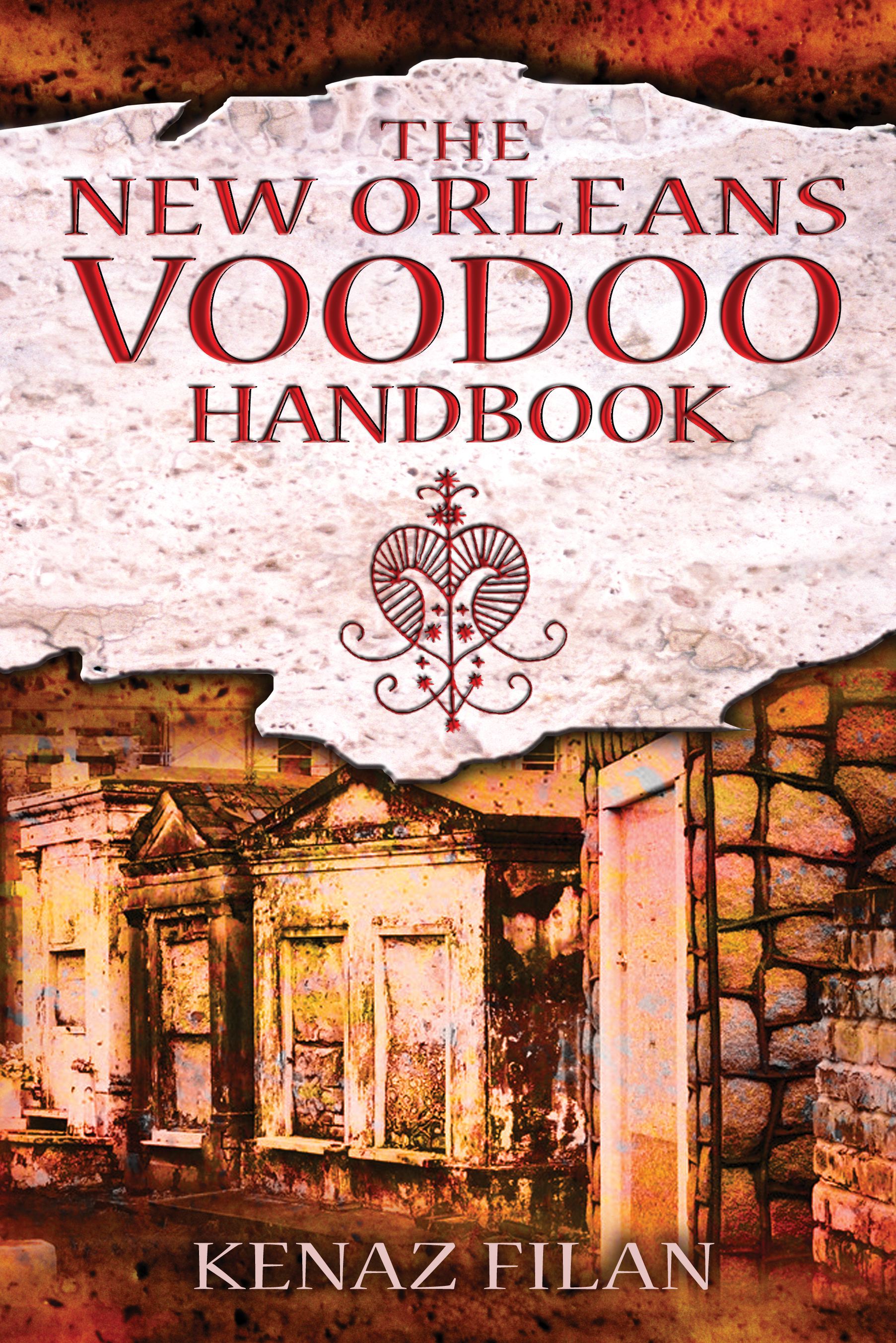 One of America&#8217;s great native-born spiritual traditions, New Orleans Voodoo is a religion as complex, free-form, and beautiful as the jazz that permeates this steamy city of sin and salvation. From the French Quarter to the Algiers neighborhood, its famed vaulted cemeteries to its infamous Mardi Gras celebrations, New Orleans cannot escape its rich Voodoo tradition, which draws from a multitude of ethnic sources, including Africa, Latin America, Sicily, Ireland, France, and Native America. In The New Orleans Voodoo Handbook, initiated Vodou priest Kenaz Filan covers the practices, tools, and rituals of this system of worship as well as the many facets of its origins. Exploring the major figures of New Orleans Voodoo, such as Marie Laveau and Dr. John, as well as Creole cuisine and the wealth of musical inspiration surrounding the Mississippi Delta, Filan examines firsthand documents and historical records to uncover the truth behind many of the city&#8217;s legends and to explore the oft-discussed but little-understood practices of the root doctors, Voodoo queens, and spiritual figures of the Crescent City. Including recipes for magical oils, instructions for candle workings, methods of divination, and even directions to create gris-gris bags, mojo hands, and Voodoo dolls, Filan reveals how to call on the saints and spirits of Voodoo for love, money, retribution, justice, and healing.

Marie Laveau was a skilled Voodoo priestess who led a huge coven of worshippers and used her magical abilities to amass great wealth and power. She was a charlatan whose primary expertise was in the arts of blackmail, pandering, and showmanship. She was a symbol of feminine power and triumph over the forces of racism and sexism--or a con artist preying on the vulnerable. There are innumerable myths about Marie Laveau; her story has been reinterpreted by various sources to support their cause or sell their products. Finding the facts about her life is considerably more challenging. If we are to learn more about the Crescent City’s most famous native, we will need to deconstruct the legends to get at the kernels of truth contained therein.

On July 2, 1850, Marie Laveau and another free woman of color, Rosine Dominique, filed a complaint before Recorder John Seuzenau seeking the return of a statue that had been confiscated during a June 27 raid on an illegal Voodoo gathering.

This is the first mention of Laveau in connection with Voodoo. In the summer of 1859 Marie Laveau’s name appeared in the local newspapers. The Crescent unflatteringly referred to her as “the notorious hag who reigns over the ignorant and superstitious as the Queen of the Voodoos.” They went on to report that her neighbor had complained that Laveau and her followers were “disturbing his peace and that of the neighborhood with their fighting and obscenity and infernal signing and yelling” during their “hellish observance of the mysterious rites of Voudou.” No record exists as to the disposition of this complaint. It could be that Laveau used her Voodoo skills to woo the judge, or she may have made out-of-court arrangements with her neighbor to keep the noise down after dark. What we can surmise from these reports is that she was by this time holding ceremonies in her home and was recognized (by some journalists, at least) as a Voodoo queen.

In her later years Laveau became increasingly frail and was unable to attend many public functions. Laveau remained a figure of legend and terror in her neighborhood, with children running from the once-beautiful woman who now resembled classic portrayals of the “wicked witch.” In the summer of 1881 Marie Laveau died. Writer Lafcadio Hearn penned a glowing eulogy for her. Although he had little sympathy for Voodoo, referring to it as “impious ceremonies of worshipping the prince of evil,” he called Laveau “one of the kindest women who ever lived” and suggested she had been called a Voodoo Queen only because of her skill in herbal medicines.

Laveau’s death did not end her fame or her notoriety. Her relative poverty at the time of her death was explained by claims that she had given away all her money to the poor. Legends and half-truths were repeated as facts, then repeated again. A widow who supported her extended family through Voodoo became one of the wealthiest and most feared citizens of New Orleans and founder of a dynasty that lasted through generations. And her grave became a site where many pilgrims came to offer their respects and to seek her otherworldly assistance.

The Tomb of Marie Laveau(s)

Visitors seeking the favor of the Voodoo queen have long left small gifts at her tomb. Coins, Mardi Gras beads, flowers, rum, and candles are often left at the site. Today it has become customary to draw three Xs on the tomb while making a wish. This is generally done using a piece of crumbling brick, although some use charcoal and others use permanent markers or other graffiti tools. Along with the inevitable Xs, the Glapion tomb is now decorated with hearts, pentagrams, poetry, and initials. Sextons regularly clean the crypt, but to no avail: the Laveau legend has ensured that as fast as old markings are removed, new ones take their place.

But while popular, this tradition is scorned by Voodoo practitioners as destructive and disrespectful. Many of the people making these brick Xs use chunks of brick they have pulled from other tombs, and many of the monuments around the Glapion crypt have sustained considerable damage from the demands of well-meaning wishmakers.

There is a long tradition that those who desecrate a gravesite can incur the wrath of the deceased spirit. Many New Orleans locals say that those who anger Marie Laveau will be haunted by the ghost of Li Grand Zombi, who was buried with her and who still protects his beloved mistress. Grand Zombi’s zombie has been described as a massive coal-black snake who slithers between the tombs. Irreverent tourists who disrespected Laveau’s tomb have reportedly awakened to find Grand Zombi beside them. Others have reported seeing a massive black cat with fiery eyes, or even the ghost of Marie Laveau herself, wandering through the cemetery in her finery and trademark red turban and muttering curses at evildoers. And if that isn’t enough to keep you away from the nearby bricks, you may want to avoid the New Orleans police department. Marking graves or otherwise desecrating cemeteries can land you a stiff fine or a stay in one of the city’s infamous jails. Don’t take the chance. This is one tradition that deserves a decent burial.

Kenaz Filan (Houngan Coquille du Mer) was initiated in Société la Belle Venus in March 2003 after 10 years of solitary service to the lwa. Filan is the author of The Haitian Vodou Handbook, Vodou Love Magic, and Vodou Money Magic and coauthor of Drawing Down the Spirits. A frequent contributor to PanGaia, Planet Magazine, and Widdershins, Filan is the former managing editor of newWitch magazine and lives in Short Hills, New Jersey.

“Kenaz Filan’s new book is quite simply the best book on New Orleans Voodoo I have ever read. It is extremely well researched detailing spirits, practitioners, and rituals, that are well known in the Crescent City, but which have never been covered in a book like this before. Kenaz takes great pains to show that Voodoo of New Orleans is a unique system of magic distinct from, but with relations to both Haitian Vodou and Hoodoo, and provide a much needed window into the ever evolving magic of America’s most occult city.”

“To understand a spiritual practice one must understand both the history and culture in which it flourished. In The New Orleans Voodoo Handbook, Kenaz Filan begins with the critical eye of a historian before investigating New Orleans Voodoo as both a spiritual science and religion. He strips away myth and fallacy, leaving us with fact, and gives us an insider’s view of the faith’s deepest mysteries. It is the first book I’ve read by an experienced houngan dealing with one of the South’s most enduring, powerful legacies. This volume is a welcome addition to both the casual historian’s and active practitioner’s library.”

“A winning blend of urban and religious history from famed New Orleans Vodou priest Filan. . . . A unique supplementary travel guide for anyone planning a trip to NOLA or readers interested in the city’s rich voodoo tradition.”

“Well researched, well written, and a delight to read, I highly recommend this to readers who want to understand how and why New Orleans voodoo is different from the island varieties.”

“Plenty of practical prayers and recipes follow, as well as instructions for divination, candle-workings and concocting magical oils, etc. Overall, this is a well–researched and highly engaging read.”

“Filan does an excellent job in presenting good information, and offering caveats for the rest. And while the Handbook is not a spell book, the information provided on the spirits, saints, oils and candle magick, plus the best explanation of what a voodoo doll is (and isn’t), is a wonderful entry into this work for anyone who wishes to pursue it further. Fun and informative, The New Orleans Voodoo Handbook is a great resource for anyone interested in this style of magick, or who’s planning a ‘magickal vacation’ in the Crescent City”

“I recommend The New Orleans Voodoo Handbook for those who want to learn more about the culture and beginnings of the spiritual tradition. ”

“The New Orleans Voodoo Handbook is about so much more than Voodoo. Using Voodoo as the lens through which the city of New Orleans is viewed, Kenaz Filan weaves a tale equal parts history, tourist guide, and introduction to Voodoo as unique as the city itself. Filan touches on topics as diverse as the evolution of race relations within the city and the proper use of ritual oils. If you are planning a visit to the city or just want a fresh perspective on a fascinating American city, pick up this book.”