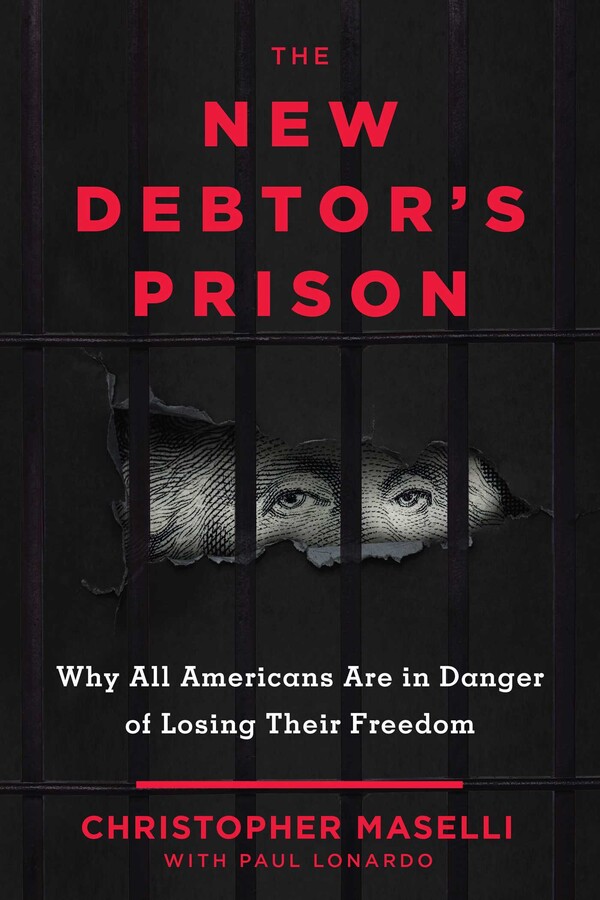 Why All Americans Are in Danger of Losing Their Freedom

By Christopher B. Maselli and Paul Lonardo
LIST PRICE £11.99
PRICE MAY VARY BY RETAILER

Debtors’ prisons might sound like something out of a Dickens novel, but what most Americans do not realize is that they are alive and well in a new and startling form. Today more than 20 percent of the prison population is incarcerated for financial reasons such as failing to pay a fine. This alarming trend not only affects the poor, who are hit particularly hard, but also ensnares the millions of self-identified middle-class people who are struggling to make ends meet.

All across the country people are being fined and even imprisoned for offenses as small as delinquency on student debt or an unpaid parking ticket. However, there is an insidious undercurrent to these practices that the average person might not realize. Many counties depend on a steady supply of citizens to pay fines and court costs in order to make their budgets. Minor vehicle infractions, by design, can rack up hundreds of dollars in charges that go straight to the city’s coffers. Combine this with the fact that many middle-class people cannot handle an unexpected $400 expense and the general lack of awareness about the risk for being repeatedly jailed for failure to pay court costs, probation, and even per day charges for being in jail and you get an endless cycle of men and women either in debt or in prison for debt.

While shocking to some, this system makes up today’s debtors’ prisons. In The New Debtors’ Prison, Christopher Maselli draws from his personal knowledge of the criminal justice system based on his experience on both sides of the prison walls as an attorney as well as a former inmate, to take a hard look at our modern prison system that systematically targets the poor and vulnerable of our society in order to fund the prison-industrial complex.

Christopher B. Maselli, Esq., is an attorney at the Providence, Rhode Island Law Firm of Thomas E. Badway & Associates, LLP, specializing in Civil and Criminal litigation. In 2006, Maselli was elected the State Senator from Johnston, Rhode Island. While a Senator he rose to the level of Deputy Majority Leader, Chairman of the Senate Rules Committee and Secretary of the Judiciary Committee. He lives in Johnston, Rhode Island.

Paul Lonardo has published both fiction and nonfiction books, including numerous collaborative titles. He studied filmmaking and screenwriting at Columbia College, Hollywood and earned a B.S. in English from the University of Rhode Island. A freelance writer and author, he lives in Lincoln, RI with his wife and son.

“Lest one think that debtors’ prisons are a thing only of Dickens’ long-ago London, Chris Maselli demonstrates in this beautifully-written book how such a draconian thing is still a part of America’s shameful present.  The 'land of the free,' we learn, is not so free, especially if you are poor.”—Dan Kovalik, author of The Plot to Control the World: How the US Spent Billions to Change the Outcome of Elections Around the World?

“The ‘land of the free’ is and always has been the land of the wealthy and powerful. Christopher Maselli’s book is an important resource for convincing working-class Americans of this reality. If what this book says is true, then the violent people we should be worried about are not those behind bars, but the police, prosecutors, and judges who put them there. Who do they really serve? Who do they really protect? What the white ruling elite calls the criminal ‘justice’ system is, for the rest of us, a cruel joke—a joke that produces quite the death toll.”—Roberto Sirvent, Ph.D., author of American Exceptionalism and American Innocence: A People's History of Fake News—from the Revolutionary War to the War on Terror

Why All Americans Are in Danger of Losing Their Freedom

By Christopher B. Maselli and Paul Lonardo
LIST PRICE £11.99
PRICE MAY VARY BY RETAILER