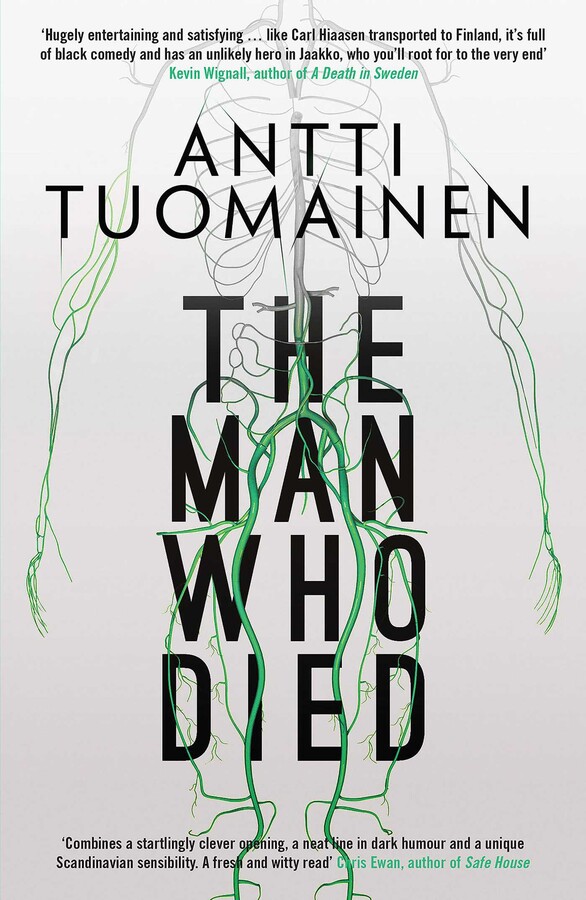 The Man Who Died

When Finnish mushroom entrepreneur Jaakko discovers that he has been slowly poisoned, he sets out to find his would-be murderer… with dark and hilarious results. The critically acclaimed standalone thriller from the King of Helsinki Noir…

‘Right up there with the best’ Times Literary Supplement

‘Deftly plotted, poignant and perceptive in its wry reflections on mortality and very funny' Irish Times

‘Told in a darkly funny, deadpan style … The result is a rollercoaster read in which the farce has some serious and surprisingly philosophical underpinnings' Guardian

A successful entrepreneur in the mushroom industry, Jaakko Kaunismaa is a man in his prime. At just thirty-seven years of age, he is shocked when his doctor tells him that he’s dying. What’s more, the cause is discovered to be prolonged exposure to toxins; in other words, someone has slowly but surely been poisoning him.

Determined to find out who wants him dead, Jaakko embarks on a suspenseful rollercoaster journey full of unusual characters, bizarre situations and unexpected twists.

With a nod to Fargo and the best elements of the Scandinavian noir tradition, The Man Who Died is a page-turning thriller brimming with the blackest comedy surrounding life and death, and love and betrayal, marking a stunning new departure for the King of Helsinki Noir.

‘The deadpan icy sensibility of Nordic noir is combined here with warm-blooded, often surreal, humour. Like the death cap mushroom, Tuomainen’s dark story manages to be as delicious as it is toxic' Sunday Express

'You don’t expect to laugh when you’re reading about terrible crimes, but that’s what you’ll do when you pick up one of Tuomainen’s decidedly quirky thrillers' New York Times

‘A bizarre, twisty, darkly comic novel about a man investigating his own murder … a tightly paced Scandinavian thriller with a wicked sense of humour’ Foreword Reviews

‘Smart, sensitive, and engaging, and guaranteed to be unlike anything else in your crime fiction library …  the perfect blend of thrills, investigation, character development, and comedy’ Crime by the Book

‘Hugely entertaining and satisfying … like Carl Hiassen transported to Finland. It’s full of black comedy and has an unlikely hero in Jaakko, who you’ll root for to the very end’ Kevin Wignall, author of A Death in Sweden

‘A delightful mad caper of a story, which will make readers snort out loud with laughter and would have made an excellent 1930s screwball comedy directed by Frank Capra’ Crime Fiction Lover

‘Combines a startlingly clever opening, a neat line in dark humour and a unique Scandinavian sensibility. A fresh and witty read’ Chris Ewan

‘A book I will never forget’ Matt Wesolowski

‘This one is a winner right from the first sentence’ Booklist

‘Antti Tuomainen is a wonderful writer, whose characters, plots and atmosphere are masterfully drawn’ Yrsa Sigurðardóttir

Antti Tuomainen
Finnish Antti Tuomainen was an award-winning copywriter when he made his literary debut in 2007 as a suspense author. In 2013, the Finnish press crowned Tuomainen the ‘King of Helsinki Noir’ when Dark as My Heart was published. With a piercing and evocative style, Tuomainen was one of the first to challenge the Scandinavian crime genre formula, and his poignant, dark and hilarious The Man Who Died became an international bestseller, shortlisting for the Petrona and Last Laugh Awards. Palm Beach Finland was an immense success, with Marcel Berlins (The Times) calling Tuomainen ‘the funniest writer in Europe’. His latest thriller, Little Siberia, was shortlisted for the CWA International Dagger, the Amazon Publishing/Capital Crime Awards and the CrimeFest Last Laugh Award, and won the Petrona Award for Best Scandinavian Crime Novel of the Year.

The Man Who Died