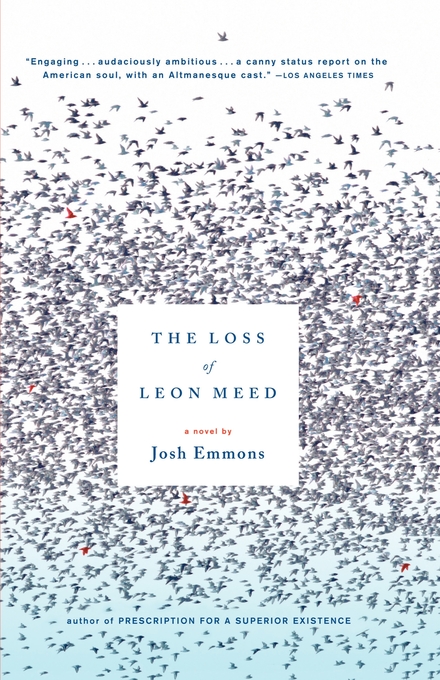 The Loss of Leon Meed

In Josh Emmons's inventive and utterly engaging debut, ten residents of Eureka, California, are brought together by a mysterious man, Leon Meed, who repeatedly and inexplicably appears -- in the ocean, at a local rock music club, clinging to the roof of a barreling truck, standing in the middle of Main Street's oncoming traffic -- and then, as if by magic, disappears.
Young and old, married and single, punk and evangelical, black, white, and Korean, each witness to these bewildering events interprets them differently, yet all of their lives are changed -- by the phenomenon itself, and by what it provokes in them. And whether they in turn stagger toward love, or heartbreakingly dissolve it, Emmons's portrayal of their stories is strikingly real and emotionally affecting.

Reader's Group Guide for The Loss of Leon Meed
1) The characters in the book who witness Leon Meed's appearances and disappearances all have very different reactions to, and interpretations of, what they see. What do their reactions and analyses of the mysterious events tell us -- and them -- about who they are and how they think about themselves and the world?
2) At one point toward the end we learn that Leon's doctors have a practical, medical explanation for his "transportations," but Emmons leaves the true explanation up in the air. What do you think is the true explanation? Was it simply mental illness? Was it magic? Something in between?
3) If the characters' different interpretations of Leon's appearances/disappearances can give us insight into the kinds of people they are, what does your own answer to the last question say about you?
4) The town of Eureka, where the story is set, gets a great deal of attention in the book. What is the significance of its name? Do you see any parallels between the life of the town and the evolution of these characters?
5) Human relationships -- from friendship to marriage -- are an important theme in the book. Discuss how the various characters come together and drift apart, and why. What do the past and current marriages of Steve and Elaine reveal about them? How are Eve's rejection of love and Prentiss's pursuit of it reconciled in the end? Finally, what connections do you see between the events of these relationships and the appearances/disappearances of Leon Meed?
6) How is religion presented throughout the novel? What role does it play for characters such as Lilith, Shane and Eve? Do the various religions discussed (Mormonism, Christianity, Wicca) share anything in common?
7) Why do you think Leon creates and then bequeaths the statues? What do they represent?
8) In what ways is Shane different from other characters in the book? What are his main motivations? Why do you think Leon Meed appears to him and what effect does this have? Does Shane have any redeeming qualities? How does he bring morality into the story? What is your overall opinion of Shane?
9) Why do you think Leon is unable to remember Elaine well enough to finish her statue? What is the significance of his revelatory letter to her? What does he mean in the following excerpt:
I know what truth is -- that we lose everything we're given. Even our own lives. But some of us can act beyond that inevitability -- like my wife, like you.
Do you agree with his perception of Elaine?
10) Several characters experience some kind of loss in the course of the book. Discuss how death and grief are presented using specific examples such as Eve losing Ryan, and Leon losing his wife and daughter. What other kinds of loss do we see in the story? How does loss help connect the characters?
11) In what other ways are the novel's characters interconnected, both literally and figuratively? Is there more than Leon that brings them together? What is the meaning of these connections?
12) Each character grapples with Leon Meed's presence in their lives. Do you see a difference in how they think about him when they're alone, versus when they're talking about him with others?
13) In the epilogue we return to see Leon's wife and daughter during their final hours alive. What do you think these two characters symbolize? Is the perspective significant here -- that we see them directly, and not through Leon?
14) Who do you think is the most memorable character? Why? 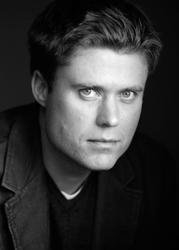 Born in 1973, Josh Emmons was raised in Northern California and received an MFA and teaching fellowship from the University of Iowa. He recently won the James Michener-Copernicus Society of America Award, which counts Michael Cunningham, Ann Patchett, Elizabeth McCracken, Ethan Canin, Nathan Englander, Adam Haslett, and Ann Packer as former winners. He lives with his wife in New Orleans.

"A remarkable and moving portrait of America that pieces together the emotional life of a small city with a wit and range that recall Robert Altman's Nashville...The Loss of Leon Meed is mature yet playful, fanciful yet brimming with the details of contemporary life."
-- Gary Shteyngart, author of The Russian Debutante's Handbook

"What a pleasure to be welcomed to a brand-new world. Josh Emmons's Eureka, mapped with well-chosen details and a sympathetic eye, is populated by terrific characters whose quests for love, faith and mystery interlock with delicate grace and humor. I enjoyed them all, especially the enigmatic Leon Meed. His loss is our gain."
-- Glen David Gold, author of Carter Beats the Devil

"Here's how you know Josh Emmons is the real deal: he's created a full spectrum of Californian characters who are ludicrous and ill-behaved and lovable in equal measure; he's a major-league prose writer who has fun in every sentence without ever showing off or hitting a phony note; and you want to keep reading him for the pure pleasure of his company."
-- Jonathan Franzen, author of The Corrections

"In an imaginative and eminently readable debut, Emmons binds together a roster of strangers in a weirdly likable tale of the supernatural. In a very fanciful way, Emmons lovingly carves very believable people out of the mists of California and displays them amidst the cacophony of their lives. A sparkling and witty debut."
-- Kirkus Reviews, starred

The Loss of Leon Meed