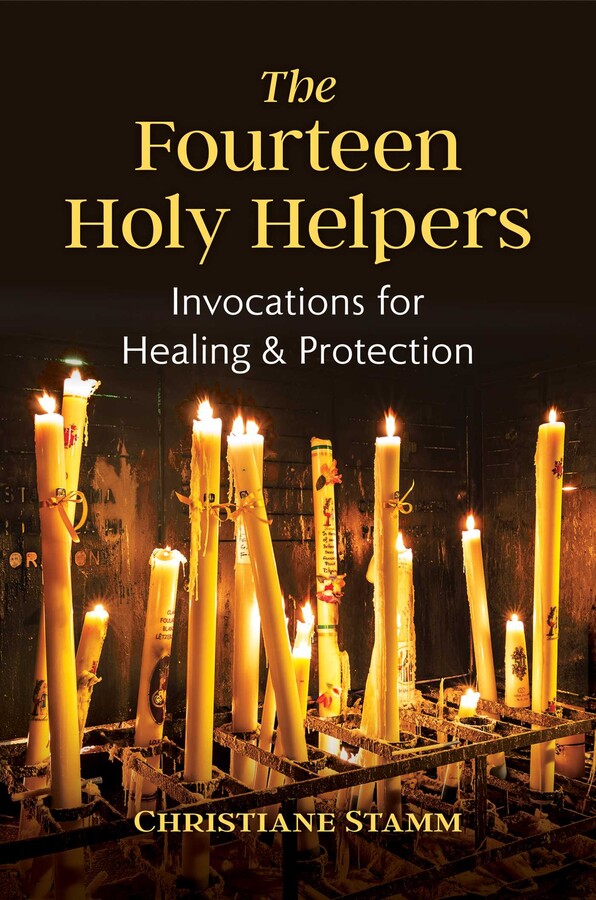 Invocations for Healing and Protection

• Shares modern updated versions of the medieval prayers of the Holy Helpers, one prayer for each of the 14 saints and one prayer to call on all of them together

• Explains how, even though these 14 saints are connected to Catholic belief, they are universal in their powers of assistance and will come to the aid of anyone who calls on them

The art of invocation--calling on spirits and higher forces for assistance--has been practiced in folk magic traditions for centuries, with roots going back to early pagan and shamanic times. Called on for more than 1,000 years, the Fourteen Holy Helpers are a group of Catholic saints venerated together because their intercession has been shown to be particularly effective in difficult times. Although they are part of the Christian tradition, these spiritual helpers are universal in their powers of assistance and will come to the aid of anyone who calls on them.

In this guide to invoking the Fourteen Holy Helpers, Christiane Stamm presents modern updated versions of the medieval prayers of the Holy Helpers, which were transmitted to her directly from the spirit world. She explains how, even though these 14 saints are connected to Catholic belief, their invoked powers connect to the original energies dwelling within humans and the Earth and calling on them works as a form of natural magic. She shares short biographies of each saint and details how to access their powers of healing and protection through writing out and reciting their specific prayers during the full moon.

The author shares 15 prayers--one for each Holy Helper, used to support healing for specific ailments or issues, and one prayer that is especially powerful because it calls on all 14 Helpers together. For each prayer she recommends a healing stone that can be added to further enhance the effect. The author also explains how to use the prayers to create protective amulets for you and your home and write a letter of invocation for love and success.

Offering a step-by-step method to call for spiritual assistance, this book helps us realize the profound power of prayer and belief and reveals how magic still exists in our modern world.

Many years ago, I received an instruction from the spirit world to revise the ancient prayers connected to the Fourteen Holy Helpers, and to offer them to humanity through initiation.

It was not an easy task as I only knew the old and rather garbled texts that were almost impossible to recite. It was impressed upon me in no uncertain terms that I should never use any negative words or terms when formulating the texts and I began my attempts to revise them. After many failures, the spirit world came to my aid and passed on to me the exact prayers. Once healing crystals to accompany the prayers had also been recommended, the invocations finally became effective and it was possible to help people with them.

When I asked why it should be now, at this precise moment, that I had received the instruction to revise these ancient prayers, the answer was that the time had come to make invocation accessible to everyone, as all human and spiritual beings draw their energy from one and the same Source.

The Fourteen Holy Helpers were being invoked and worshiped as early as the 9th century, but they have increasingly fallen into obscurity in contemporary times. Their help was particularly vital in the 13th and 14th centuries, when plague reigned supreme throughout the world. It was during this period that the Holy Helpers were especially important. Each of the Fourteen Holy Helpers was also assigned additional areas of responsibility, however, and the temporal and spiritual problems of the time were addressed with their aid, as people would call upon a saint for help in times of crisis.

As a result of globalization and the breakneck pace of technological and scientific advances, especially in medicine, the saints gradually fell into obscurity. Little has changed over the centuries, only the issues that people are concerned about--instead of plague, there is cancer or AIDS, and of course COVID-19. Instead of famine, there are job losses and unemployment, so the need right now for angels, saints, and the Fourteen Holy Helpers is as great as ever. Although people invoked the Holy Helpers to assist them with their troubles and concerns for many long centuries, the cult surrounding the fourteen Helpers only became well-known thanks to an apparition.

Legend has it that the “Fourteen” appeared to Hermann Leicht in what is now Klosterlangheim in Germany and identified themselves as the Fourteen Holy Helpers. Hermann Leicht was a local shepherd in the town of Langheim in Upper Franconia, Germany, where the Holy Helpers appeared to him in 1445 and 1446. A chapel was initially built on the site of the visitation, and in 1774, German architect Balthasar Neumann built the Basilica of the Fourteen Holy Helpers, which became a popular pilgrimage site.

The first documentary mention of the Four Marshals, also known as the Holy Marshals, comes in 1478. Depictions of the marshals are less common from the end of the 17th century and veneration of them dies away.

An invocation may be addressed to one of the Fourteen Holy Helpers for a number of reasons. Prayers of healing are generally recited to restore health.

The subject of an invocation may also be a physical object such as an amulet, a house or apartment, or indeed a crystal to be carried as a good luck charm and symbol of support. It could also be an idea or concept such as a partnership.

Initiation
In principle, anyone can learn invocation, as we are all part of the same energy. Therefore, everyone can bring help and healing through invocation. In its perfected form it is natural magic, which is why it has been interpreted as magical and considered mystical since the earliest times. According to ancient tradition, spiritual knowledge and its attendant rituals must be passed on from one person to another. This used to be carried out by word of mouth, from master to pupil, but in this day and age we also make use of the medium of the written word.

This process of handing on knowledge (initiation) and the passages in this book will connect you with the energy of secret knowledge; its power will live within you. After following the instructions, you will be initiated exactly as if you had received this knowledge from your ancestors.

You now have some work to do (there is no such thing as something for nothing!). Choose a nice notebook (or a pad of blank paper) for your personal journal, but wait for the next full moon before beginning to copy out your prayers of healing. It is only in the act of copying out the prayers that the magic of invocation will pass to you.

The Prayers of Invocation and Healing

O, Fourteen Holy Helpers
banish wounds and hurt.
May evil be banished
and love enter the heart.
So shall it be!
In the name of the Father, and of the Son,
and of the Holy Spirit.
Amen.

Evil is banished and good summoned with this cleansing prayer. Joy in life shall be yours. All Fourteen Holy Helpers are entreated to program your body for good health.

Recite this prayer of healing at the beginning of every invocation.

Healing crystal: Clear quartz (clarity)
Wearing or being close to clear quartz brings clarity and the insight to see yourself more clearly. You recognize what is real and true. At the same time, it awakens primordial instincts and brings you to a stage that leads to inner truth. It helps to remove blockages that cause many diseases.

Using the Prayers of Healing
In order for initiation to be successful, it is essential to copy out the prayers you require in your own hand and in your own notebook or journal, exactly in accordance with the prescribed ritual. Once everything has been carried out as specified, you are initiated, and all the power and energy of the prayers is available to you.

When writing out the prayers during the initiation process, some people report experiencing a sensation of warmth or a tingling throughout their whole body, along with feelings of love for others and for themselves. This may not necessarily be the case for you as reactions differ from person to person.

Please remember the following:
• During an invocation, the most important requirement is to be calm and focused.
• Never carry out invocation when you are under time pressure or feeling stressed.
• Take your time until you feel completely relaxed and entirely at ease, safe, and secure.
• Now, allow yourself to be guided step-by-step and you will learn how to use healing prayers correctly.

Read through each prayer in your head several times, repeating each time:

In the name of the Father, and of the Son,
and of the Holy Spirit.
Amen.

This sentence can also be adapted, and the prayer said in the name of Allah, or of the Universe, or of Light or of Love; do what feels right for you.

However, do not change the phrase “so shall it be” under any circumstances. If you were to do so, you would sacrifice the power of the energetic flow since this is an ancient phrase with great inherent power and energy. Recite it slowly and with all your heart to allow it to develop its full strength and power.

At this point, I can only recommend that you learn the first prayer of the Fourteen Holy Helpers and the sixth prayer to Saint Barbara by heart, as you will need these prayers for every invocation.

Invocation procedure for personal use
Make yourself comfortable, either lying on a bed or seated in an armchair.

Relax and adjust your position until you feel at ease.

Place both hands on your solar plexus (level with your stomach); get your left hand in position first, and then place your right hand over your left.

Make sure your hands are about a hand’s width above your navel, or place your hands directly on the area you wish to treat.

Your eyes may be open or closed.

Now focus all your attention on the first prayer and recite it: O, Fourteen

You will soon feel the power and energy released by this prayer of healing flowing through your hands. The feeling will last for several minutes and your whole body will be flooded with energy. When you sense that it is beginning to subside, this is an indication that the body has “refueled” and absorbed sufficient energy for the moment.

Checking the results
Hold your hands around 4 inches (10 cm) above your solar plexus or the area awaiting treatment. Repeat the prayer (O, FourteenHoly Helpers). You should now feel a pleasant, warm energy and an invigorating power.
Christiane Stamm

Christiane Stamm works as a commercial trainer and relaxation educator. With the help of the spirit world, she has given the prayers to the Fourteen Holy Helpers a modern interpretation. She lives in the south of Germany.

Invocations for Healing and Protection