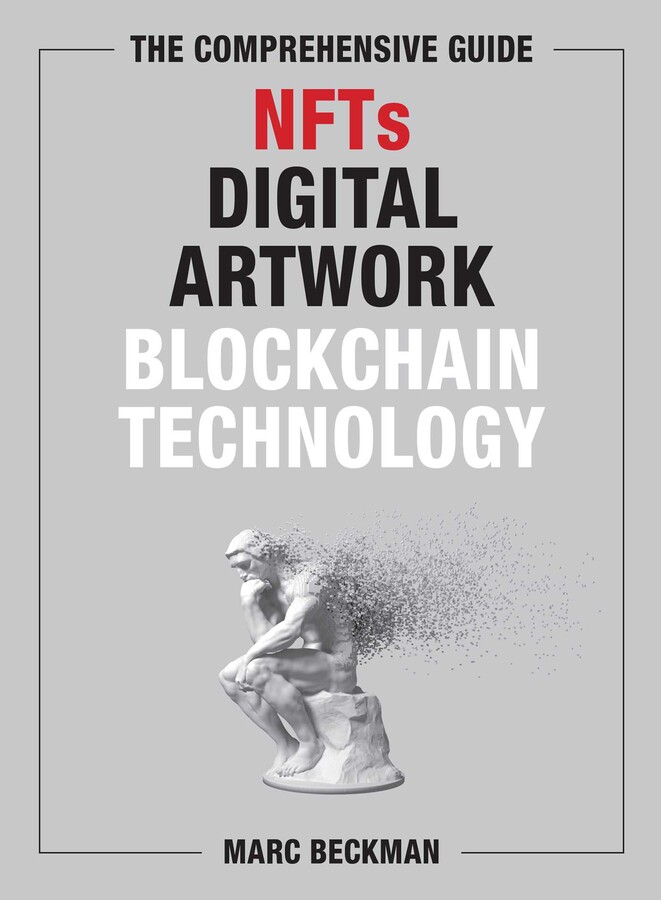 The Comprehensive Guide to NFTs, Digital Artwork, and Blockchain Technology

The ultimate guide to the NFT revolution: How non-fungible tokens are poised to transform the digital world.

Non-fungible tokens, or NFTs, are the most important digital innovation since the creation of blockchain and cryptocurrency. NFTs share the best elements of both of these, while also representing an entirely new step forward for technology. But how did NFTs arise, how will they impact art and business in the decades to come, and—perhaps most importantly—how can savvy entrepreneurs position themselves today for success in the NFT-driven world of tomorrow?

This guide by industry leader and entrepreneur Marc Beckman delves into the underpinnings of NFT technology in a way that makes the subject clear and comprehensible to the layman, while drawing on Marc’s branding experience to explore exactly how NFTs are poised to change fashion, sport, fine art, and even social justice. In this book he explores how NFTs will create entirely new asset classes and investment possibilities, such as fractional ownership in dynamic works of art. And in doing so, he also tells the story of how he personally discovered and became entranced by this powerful new tool, and where he believes NFTs will take business and branding throughout the 21st century.

This was the question that seemed to echo across the art world—and then across the entire world—as news spread of a remarkable and unusual sale by Christie’s auction house in early March of 2021. A digital collage entitled Everydays: The First 5000 Days, by an American artist known only as Beeple, had sold for a staggering $69.3 million. The sale price alone made this transaction remarkable news. But there was something more. Something that took this transaction from the realm of the rare into the land of the positively game changing.

What had been sold by Christie’s was not a canvas. Or a print. Or a sculpture. Or anything that could be touched or felt or held in someone’s hand.

What had just sold for this staggering sum had come in the form of an NFT, or non-fungible token. Technically speaking, it was a digital file, but not just any digital file. The artwork contained a token verifying the unique nature of the piece, and tracing the record of the work’s ownership back to the very circumstance of its creation. The token meant that the work could never be altered or changed by anyone save the new owner—who turned out to be a famous blockchain investor—and that no facsimile or reproduction of the work could ever truly be created, because any reproduction would lack this unique, distinguishing token.

Many in the art world certainly were, at least initially. But this sense of bemusement was soon followed by a creeping feeling that something very important had just occurred—something with the potential to change transactions—and even the very notion of “ownership”—forever.

These are, after all, times of remarkable change . . . especially in the digital world.

The rise of cryptocurrency is revolutionizing how payments are executed, while at the same time building an entirely new class of investors. Crypto is also creating a world of finance and financial transactions that are free from government regulation in ways that have never before been possible. With the value of digital tokens like Bitcoin hitting middle five figures, even entities that had been skeptical of the utility of cryptocurrency (or who had downright called it a scam) are now changing their tunes and rushing to invest.

Stepping back for an even wider view, blockchain—the mechanism that underpins both cryptocurrency and NFTs—is advancing the technology used to verify who created something, who owns something (digital or otherwise), and where that something came from. With blockchain, the ownership history of a piece of currency is baked into the currency itself, and is accessible to anyone who examines it.

Imagine you could take a dollar out of your wallet and immediately know every person who had used that dollar, the nature of every transaction it’d been used for, and that you could see back to the very moment when the bill was printed.

In the real world, you can exchange a dollar bill with your friend for another dollar, and the contents of your respective wallets will be—for all practical purposes—essentially unchanged. Neither of your dollars is going to be more valuable than the other. And the history of both dollars essentially remains a mystery. You don’t know where it came from, or how it has been used. And you probably have the same chance of being able to guess if the dollar is real, or if it has been counterfeited.

But not so with NFTs.

This is the “NF” part of an NFT. It’s non-fungible. That means you can’t exchange it for something like it somewhere else, and have everything be exactly as it was.

Many things of value are fungible, especially cash or coin money. But with the rise of crypto, that is going to change—for currency, but also for artworks, for collectibles, and for digital items of all sorts.

As the art world learned after the sale of Beeple’s collage, an NFT is value because it is an utterly unique item, and this fact is verifiable. An NFT is a custodian of its own uniqueness. It can self-verify as a one-of-a-kind work of art. (Like a counterfeit detector can show that a bill is authentic, an NFT does this for itself.) An NFT can “tell its own story,” and it can do that for as long as it exists.

Even to those unfamiliar with cryptocurrency or blockchain, with the sale of Beeple’s collage, the puzzle pieces began to fall into place. Suddenly, the blockchain wasn’t just for digital currencies like Bitcoin. Now, it was going to be for all sorts of things.

In the art world, the problem of fakes would disappear completely. The owner of a work could sell that work at any time, and have full faith in the transaction. Buyers would enjoy a new level of confidence in the authenticity of their new asset.

And then there was the existential side of things!

Purchasing artwork in the form of an NFT would create a deep and powerful level of ownership never before available to an art collector. The person purchasing a work of art as an NFT would have full claim not only to the work, but to its entire past, back to the moment of inception. Furthermore, that collector would always have an irrevocable place in the work’s history regardless of who might come to own it in the future. Their name would be on its blockchain forevermore, and old notions of curation and custodianship would turn entirely on their heads.

And as the mind-boggling circumstances of the sale of Everydays: The First 5000 Days slowly began to become clear, entrepreneurs and professionals dealing in content creation began asking a new question. No longer was it, “What just happened?” but now it was, “So what about me?”

If NFTs could work in the world of fine art, then what about the world of sports imagery, or fashion photography, or music, or important historical documents? The list goes on and on.

It became clear that anything that was bought, sold, collected, or inherited stood to be impacted in a positive way by NFTs. Artists and photographers were about to find remarkable new revenue streams, and previously unimagined incarnations for their work. Brands were going to find new ways of connection with their customers. Entertainers and video game developers were going to immerse fans in ways never before dreamed of.

I wanted to write this book because, frankly, this powerful change is coming whether people like it or not. In an era when the disrupting and upending of entire industries has become a regular occurrence, negotiating the “NFT-transition” will be an important part of businesses staying competitive in the twenty-first century.

In this book, my goal is to provide you with a solid overview of NFTs, and to take away the “mystery” that some people felt when Everydays: The First 5000 Days was sold. I’ll lay out NFTs’ relationship to blockchain and digital currency to help you to understand how NFTs work precisely. We’ll explore the nuts-and-bolts of how NFTs will help creators monetize their creative assets in exciting new ways, and how collectors can strike at the right time to invest in a completely original form of asset. Finally, I will help prepare you to act now in preparation for this new world just on the horizon.

It was one thing to explain what Bitcoin even was ten years ago, but quite another to forecast what Bitcoin would mean.

If you want to understand what happened in March of 2021, why it matters today, and how to position yourself for success in the world it’s about to bring about, then read on . . .
Marc Beckman

"Marc Beckman is a visionary who sees future opportunities ahead of most. His vast knowledge of NFTs and longterm strategy in this growing business separates him from all the other people who are just in it for a fast dollar." —Steven Cooper, Sony

"Comprehensive is an understatement. Marc Beckman’s thoroughly necessary text outlines the past, present, and likely future of NFTs. A worthwhile primer for the artists, collectors, investors, and marketers among us." —Dina Fierro, NARS Cosmetics

The Comprehensive Guide to NFTs, Digital Artwork, and Blockchain Technology