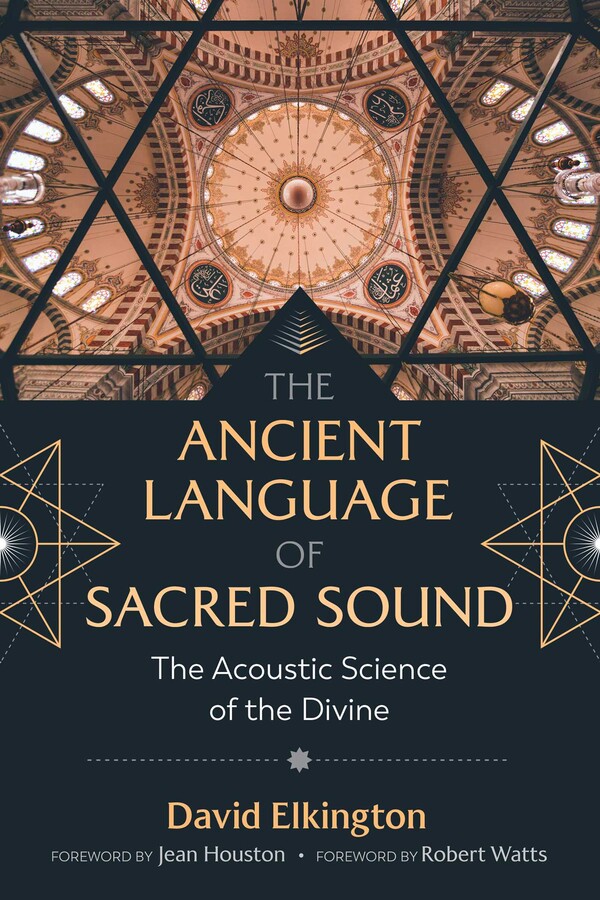 The Ancient Language of Sacred Sound

The Acoustic Science of the Divine

The Earth resonates at an extremely low frequency. Known as “the Schumann Resonance,” this natural rhythm of the Earth precisely corresponds with the human brain’s alpha wave frequencies--the frequency at which we enter into and come out of sleep as well as the frequency of deep meditation, inspiration, and problem solving. Sound experiments reveal that sacred sites and structures like stupas, pyramids, and cathedrals also resonate at these special frequencies when activated by chanting and singing. Did our ancestors build their sacred sites according to the rhythms of the Earth?

Exploring the acoustic connections between the Earth, the human brain, and sacred spaces, David Elkington shows how humanity maintained a direct line of communication with Mother Earth and the Divine through the construction of sacred sites, such as Stonehenge, Newgrange, Machu Picchu, Chartres Cathedral, and the pyramids of both Egypt and Mexico. He reveals how human writing in its original hieroglyphic form was a direct response to the divine sound patterns of sacred sites, showing how, for example, recognizable hieroglyphs appear in sand patterns when the sacred frequencies of the Great Pyramid are activated.

Looking at ancient hero legends--those about the bringers of important knowledge or language--Elkington explains how these myths form the source of ancient religion and have a unique mythological resonance, as do the sites associated with them. The author then reveals how religion, including Christianity, is an ancient language of acoustic science given expression by the world’s sacred sites and shows that power places played a profound role in the development of human civilization.

We are inclined to see temples and pyramids very much in the past tense and fail to see that they were, and still are, living, breathing places of creation: of the outpouring of creation that came from them. What we do not and cannot see is what we cannot now hear - these were places of music and dance. Britain had Perpetual Choirs, there were Choral Guilds in the Temple of Jerusalem, the pyramids rang out to the music and hymns of the gods. Wherever there is a sacred place it was a place of music and chant.

The purpose of music and chant was to alter our brainwave patterns, to take us away from the mundane and into the heavenly.

Over the course of many years I was witness to and partook in a series of experiments at these places; experiments that charted their individual resonance. But there was one clear distinguishing aspect to them all that was nothing short of astonishing. When soundwave patterns from these sites were manifested in pictorial form, using a process known as Cymatics, they demonstrated a clear linguistic form, exhibiting script-types unique to those cultures. We saw Celtic knot-work at Celtic sites, Buddhist and Hindu yantras at Buddhist and Hindu sites, Paleo-Hebrew script, the Om of Hinduism, and, most astonishingly, hieroglyphs deep inside the Great Pyramid of Giza. The list is by no means definitive, but the implication is clear: written script, in its earliest form, emerged from these sites in a form created by sound.

However, it didn’t just appear there: it was a gift of the gods given to humanity via the hero.

It is the hero who is the fulcrum point at these places: whose myth informs us that he was the meeting point of humanity and God: the perfect arbiter between both.

As I began to look deeper into the legends it became increasingly obvious to me that what we are looking at is not just a metaphor for an experience but an expression of what I can only describe as Spiritual Technology.

But who is the Hero really?

The hero is a state of mind, almost the calm after the storm of not knowing. He brings self-awareness and the ability to grow, to ascend, to climb to heaven by learning wisdom. In effect, we are witnessing a Technology of the Soul, the science of our intellectual and conscious ascent: and in this scheme of things the sacred site becomes the umbilicus connecting us to an unseen world.

These places were constructed with a clear and resonant purpose: they are places of communion--between humanity and the divine. But what exactly are the gods? What do they represent?

The general answer is that they are forces of nature, expressions of the different aspects of the world around us. However, somewhere in all of this is a meeting point, where man meets god, where man even becomes god. That place is the Temple.

There was no denying the remarkable similarities of worldwide hero-myths: the story, with variations based on geography and culture, is largely the same, even to the degree that the names are the same and have the same meaning.

In this scheme the Sun as the Father-god shines upon the Earth-Mother, adding to the life she gives. The earth aspect is wisdom: our ability to listen to it is our wisdom, the beauty of which is reflected in the shades of the moon. The child of these deities is the hero, whose task is to unite heaven and earth by teaching us language and how to sing it. In his quest to bring us self-awareness, he dies to become a Judge of the Dead: an ancestral memory. Humanity is brought to consciousness by the Divine Child--and in all of this the sacred place plays a central role.

As this work will demonstrate, all sacred places were carefully designed to maximise the most beneficial acoustical effects, for the precise days to which they were aimed, more often than not the summer and winter solstices; though there are plenty of exceptions to the rule.

Whilst this analysis is extraordinary it leaves out one central point: that we are the instrument of measurement in the new science--the technology is ourselves.

In the mythologies associated with these sites it is the hero who brings consciousness, who brings self-awareness by his heroic actions on behalf of humanity: because the hero is humanity, he is humanity as self-aware. His is the journey to the dark heart of wisdom: dark in the sense that wisdom is about seeing both sides of the argument in order to reach the higher good.

And indeed, on the morning of the Winter Solstice the sacred places are equally dark as their resonant frequencies take effect. In this way they acted as chambers of initiation wherein the hierophant would undergo spiritual death in order to become the hero. Quite often this hierophant was the King--and the duty of the King was his duty to his people.

Thus the beauty of the sacred space was as a touch paper whose fires were lit by the presence of the enquiring mind: ars sine scientia nihil est - the practice of an art without proper knowledge accomplishes nothing.

It is my belief that it was at the sacred site where knowledge first emerged.
David Elkington

David Elkington is an academic and historian, specializing in Egyptology and Egypto-Palestinian links. Known for his work on the Jordan Lead Codices--the earliest known initiatory Christian documents--he is the coauthor of The Case for the Jordan Codices. He has lectured at Oxford and Cambridge Universities and appeared on many television programs, including Forbidden History. He lives in The Hague, Netherlands.

The Ancient Language of Sacred Sound

The Acoustic Science of the Divine