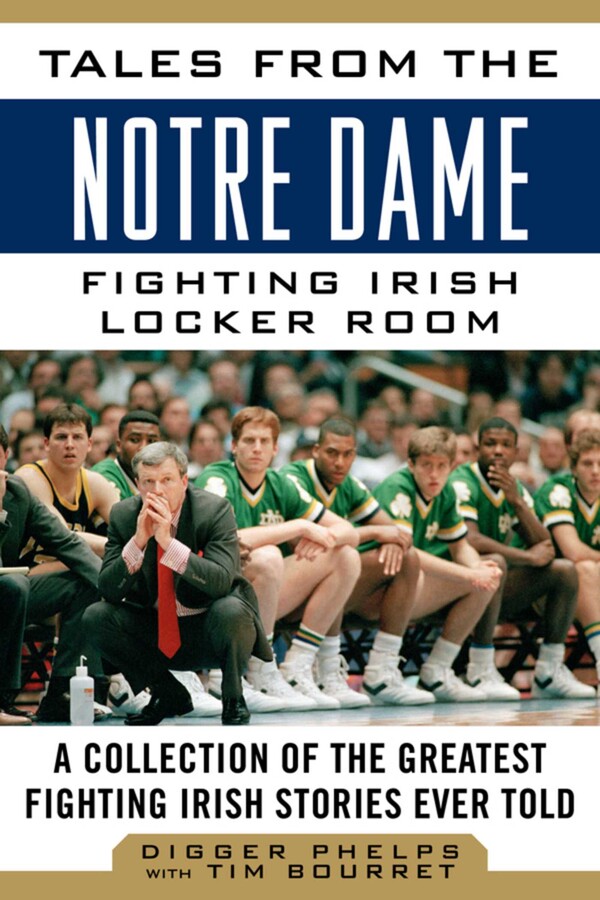 A Collection of the Greatest Fighting Irish Stories Ever Told

Part of Tales from the Team
By Digger Phelps and Tim Bourret
LIST PRICE £14.99
PRICE MAY VARY BY RETAILER

Former ESPN basketball commentator Digger Phelps is regarded as one of the most charismatic and opinionated analysts in the profession. And he was the same personality during his twenty years as the head coach at the University of Notre Dame. In this book, first published in 2004, Phelps teams up with Tim Bourret and recalls the most successful period in Notre Dame basketball history. In his twenty seasons, seventeen of Phelps’s teams advanced to postseason play, including fourteen NCAA Tournament teams. In the book, Phelps recalls his initial expression of interest in Notre Dame through a 1965 letter he wrote to football coach Ara Parseghian. It recounts the scenes of his seven wins over number one-ranked teams, including the landmark game in 1974 when the Irish ended UCLA’s eighty-eight-game winning streak. Two chapters concentrate on the coach’s former Notre Dame players, concluding with the selection of his All-Digger teams. He also recalls the twenty Hall of Fame coaches he competed against, including Bobby Knight, Al McGuire, Ray Meyer, and John Wooden. Tales from the Notre Dame Fighting Irish Locker Room also contains a chapter entitled Domers,” which documents Phelps’s relationships with Notre Dame coaches, administrators, and student-athletes, including Father Theodore Hesburgh, the man who made Notre Dame what it is today.

A Collection of the Greatest Fighting Irish Stories Ever Told

Part of Tales from the Team
By Digger Phelps and Tim Bourret
LIST PRICE £14.99
PRICE MAY VARY BY RETAILER