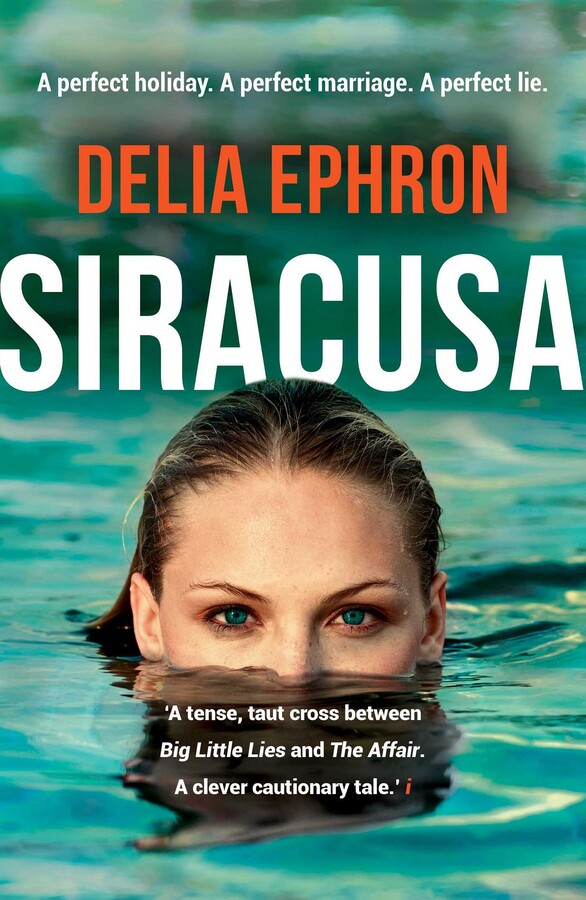 By Delia Ephron
LIST PRICE £3.99
PRICE MAY VARY BY RETAILER

New Yorkers Michael, a famous writer, and Lizzie, a journalist, travel to Italy with their friends from Maine – Finn; his wife, Taylor; and their daughter, Snow. “From the beginning,” says Taylor, “it was a conspiracy for Lizzie and Finn to be together.” Told Rashomon-style in alternating points of view, the characters expose and stumble upon lies and infidelities past and present. Snow, ten years old and precociously drawn into a far more adult drama, becomes the catalyst for catastrophe as the novel explores collusion and betrayal in marriage.

With her inimitable psychological astuteness and uncanny understanding of the human heart, Ephron delivers a powerful meditation on marriage, friendship, and the meaning of travel. Set on the sun-drenched coast of the Ionian Sea, Siracusa unfolds with the pacing of a psychological thriller and delivers an unexpected final act that none will see coming.

‘Ephron piles on the tension in this unflinchingly observed study of two couples' relationships imploding on a shared holiday. The presence of an eerily precocious child brings a chill premonition from the start.’

‘A brilliant, biting take on modern relationships… Ephron...has conjured a minor masterpiece that reads like a mash-up of Henry James and Raymond Chandler. It leaves you longing for the film – which is already in the works.’

‘A tense, taut cross between Big Little Lies and The Affair. A clever cautionary tale.’

'A master of precise and keen character development, a virtuoso of pacing and surprise, a wizard at skewering convention and expectation, Ephron offers a bewitching take on relationships—marital, parental, casual, and serious—in this read-in-one-sitting, escapist escapade with a message.'

'[Ephron] excels at [depicting] characters’ unintended comedy, their emotional warfare and witty observations of travel and consumption....with a deft, stinging touch. They are a wise reminder that the hungers driving these people are a ravenous, even violent, business.'

'A seductive and edgy dissection of two imploding marriages—and an unhinged mother-daughter alliance... Each of these toxic relationships puts the characters on course to careen headlong into a dark place of deceit and rage in Ephron’s brilliant takedown of marital and familial pretense.'

'[A] suspenseful, thoroughly delicious tale. You can almost taste the gelato.'

'Sophisticated, elegantly written, delightfully cynical…Ephron’s novel has the feel of a classic.'

'An irresistible novel for fans of psychological thrillers, or those considering vacationing with former lovers and spouses (often one and the same).'

'Siracusa starts innocuously enough, as an ironic travelogue about American sophisticates abroad...The situation begins to resemble a Ford Madox Ford novel, with each narrator recounting and interpreting the same encounters from vastly differing perspectives….As the clues pile up, the coming storm is expertly foreshadowed—but when it arrives, it's utterly surprising.'

'The word ‘unputdownable’ is somewhat overused when describing a good book—but really, I just could not put this book down. Delia Ephron’s Siracusa is a dark tale with incredibly well-drawn characters. It reveals the slights and secrets that can bring about chaos among friends and within families, and adds more than a spoonful of evil into the bargain. I stayed up well past my bedtime to finish.'

'Siracusa is dazzling. Here is Delia Ephron with a stunning noir tale of marriage and morality, as two couples tangled in secret longings and betrayals travel through Italy, along with a gimlet-eyed ten-year-old daughter who could have been created by Henry James. Beware. You will be up all night to finish. I was.'

‘A seductive take on marital betrayal…the secrets and lies at the heart of all relationships.’

‘This is a delicious story, ripe for a cinematic adaptation.’

'An unusually crackling, tricky journey into the distant land of other people's marriages... Ephron writes like a warm-blooded Patricia Highsmith.'

– Meg Wolitzer, author of The Interestings

‘Siracusa is an Italian aria, a Greek tragedy and a modern American masterpiece written by Delia Ephron at the height of her powers…unforgettable.’

'A stunning portrait of two marriages coming unraveled during the stress of travel abroad. Insightful and engaging. A must-read!’

By Delia Ephron
LIST PRICE £3.99
PRICE MAY VARY BY RETAILER