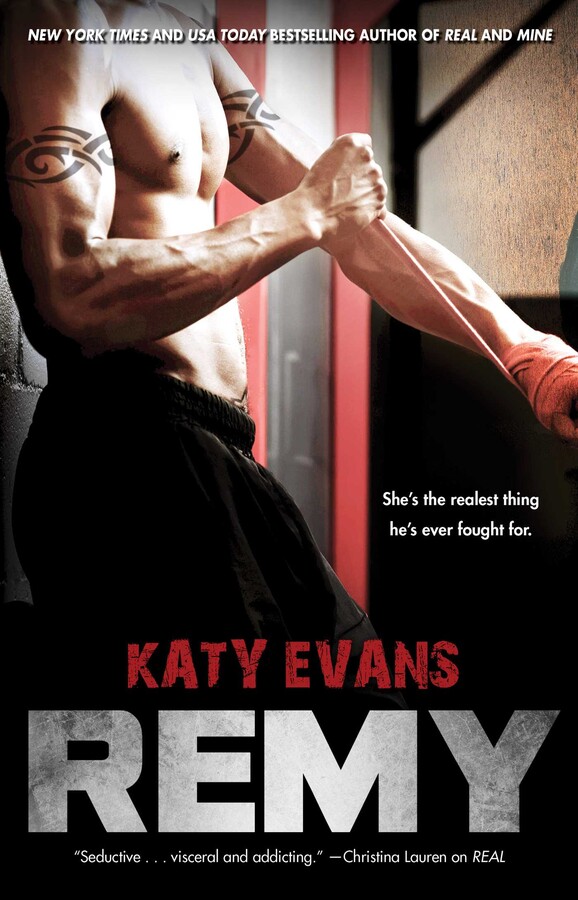 Part of The REAL series
By Katy Evans
LIST PRICE £5.99
PRICE MAY VARY BY RETAILER

Underground fighter Remington Tate is a mystery, even to himself. His mind is dark and light, complex and enlightening. At times his actions and moods are carefully measured, and at others, they spin out of control.

Through it all, there’s been one constant: wanting, needing, loving, and protecting Brooke Dumas. This is his story; from the first moment he laid eyes on her and knew, without a doubt, she would be the realest thing he’s ever had to fight for.

Remy PRESENT SEATTLE
There will be hundreds of days in my life that I won’t remember.

But this is one day that I will never forget.

“I swear if you frown any harder at the door, it’s going to collapse under your stare,” my PA, Pete, calls from the couch.

I swing around to where he and Riley have been watching me pace around the living room of Brooke’s old Seattle apartment. Apparently those two are amused as fuck by me. Dipshits. I don’t see what’s so amusing. Turning back to the bedroom door, I continue pacing.

For the life of me, I can’t imagine what’s taking her so long. It’s been exactly fifty-eight minutes since she locked herself up in our bedroom to get ready, when Brooke—my fucking Brooke—usually gets dressed in five.

“Dude, it’s her wedding day. Chicks take a lot of time to get prepped.” Riley thrusts his arms out in the air in a gesture that implies That’s life!

“It’s the dress!” Melanie, Brooke’s best friend, says, exploding out of the master bedroom with a trail of white stuff that looks like a veil. “It has all these buttons . . . and what are you three doing here anyway? Remington, I talked to Brooke about it. You guys should leave and we’ll meet you at the altar.”

“That’s fucking ridiculous,” I say, laughing. But when Melanie keeps staring at the three of us, and especially me, with an expression someone might use on a couple of dogs they want to scat, I scowl and head to the bedroom door.

I curl my fingers around the doorknob and speak through the closure slit. “Brooke?”

When I hear shuffling, I press closer to the edge and drop my voice so the dipshits on the living room couch don’t hear. “Why the fuck can’t I see you right now, baby?”

All this entering and exiting the room by Melanie, with me separated by a locked door from my soon-to-be wife? I don’t like it. And separated despite the fact that she’s supposed to be getting dressed for me.

“I guess because I want you to see me walk up to you,” she whispers.

God, that voice, right there. Makes me want to throw the door down and kiss the hell out of her, then do stuff to her under that dress she’s trying to put on—the things that husbands do to their fucking wives. “I will see you walk up to me, baby, I just want to see you now too. Open the door and I’ll do your buttons.”

“You can undo them later and then do me.” The cheeky statement is followed by a soft “Gaaah,” like someone—a very little someone—is amused about something on the other side of this door.

“Excuse me, Riptide,” Melanie says as she returns, and waves me away from the door. “You boys should head out to church. We’ll see you there in thirty minutes.”

I scowl when she slides inside the bedroom like a goddamn worm through a tiny slit, preventing me from so much as glimpsing Brooke. Using much the same method, the much-larger Josephine steps out with something squirming against her chest. My son looks at me from the crook of her arm and falls still; his lips are curled in such a way that he almost wears the same amused expression Pete and Riley do.

He takes the hand he’s got stuck inside his mouth and slaps it flat and wet to my jaw. “Gah!” he says, then squirms and flings himself to me.

Catching him, I nuzzle his stomach and growl, which elicits another “Gaaaaaah!”

When I lift my head to look into his eyes, he’s fucking delighted. And so am I, but I growl again like I’m not and grumble at him, “You think I’m funny?”

His eyes are all mischief. His head is smaller than my palm as I cup it and buzz the fuzz on the top of his head. My four-month-old, Racer, the son Brooke gave me? He’s the most perfect thing I’ve ever done in my life.

I never thought I’d have something like him. Now my life revolves around this dimpled squirrel, who pukes on all my fucking T-shirts, and my Brooke. And, god, where do I start with her?

Pete slaps my back with a loud thunk. “All right, dude, you heard them. And watch it—he’s going to get all that baby stuff on your suit!”

Clamping my jaw, I pat Racer’s head and he grins at me. He has one dimple, not two. Brooke says it’s because he’s only half mine. I contest he’s all mine, and so is she.

Smiling back at him, I return him to Josephine, who assures me, “Go peacefully, Mr. Tate, I’ve got this.”

She’s supposed to be a bodyguard, but I don’t know what the hell she is now. She strolls outside with Racer and does some nanny work too. He sticks his fingers into her hair and pulls and she even seems to like it.

After a glance at the kitchen clock, I level my gaze at her. “I want her there in fifteen minutes,” I say, and she nods.

A limo is waiting for my bride, but Riley’s got the keys to Melanie’s convertible, parked just outside without the top down. We all leap inside. I drop down on the front passenger seat and then stare up at the window of our temporary apartment. I can’t understand what the big fuss is about wedding-dress buttons. As far as I’m concerned, I should ride, in the car, with my wife, to the fucking church, where we marry. Period.

“Rem. It’s not like she’s going to leave you standing at the altar, man,” Riley says, laughing.

“Yeah, I know,” I whisper, turning back around. But sometimes I just don’t know. Sometimes all my chest feels knotted and I think about waking one morning to find Brooke and my son gone, and dying is too easy to describe what I want to do.

“Twenty-eight minutes, she’ll be walking up to the altar in white, just for you,” Pete says.

I stare out in silence.

Brooke has been excited about this all month. Wondering if this, if that, if a cake, if not a cake. I’d say yes to anything that made her voice more excited, and she’d kiss me like I like. So now she seems in control, getting dressed, ready for her day, and I feel like a mess because she’d said she didn’t mind us driving together to the church. And then her best friend put stupid-girl ideas in her head. I ride alone. To a church I never go to. To marry my wife. She’s right behind us, but I’m not good. I’m fucking anxious and this is an anxiety that would have been appeased if she’d opened the door and just looked at me with those gold eyes—my mind would have gone still and all the roiling in my chest would have gone quiet.

But it’s not happening.

Now I have twenty-seven infernal minutes to go . . . and my mind is playing tricks on me like it does when it starts swinging like a pendulum, and the only way I can seem to stop it is with her.

Tapping my foot, I stroke the ring in my hand. Then I pull it off and it helps to see her name on its inscription: TO MY REAL, YOUR BROOKE DUMAS. 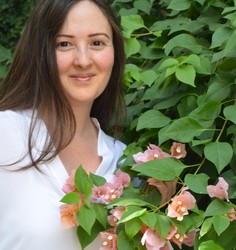 Katy Evans lives with her husband and their two children plus three lazy dogs in south Texas. Some of her favorite pastimes are hiking, reading, baking, and spending time with her friends and family. She is the New York Times and USA TODAY bestselling author of Manwhore, Manwhore +1, Ms. Manwhore, and The REAL series: REAL, MINE, REMY, ROGUE, RIPPED, and LEGEND. For more information on Katy Evans visit her website KatyEvans.net, and follow her on Facebook and Twitter, @AuthorKatyEvans.

Part of The REAL series
By Katy Evans
LIST PRICE £5.99
PRICE MAY VARY BY RETAILER

More books in this series: The REAL series