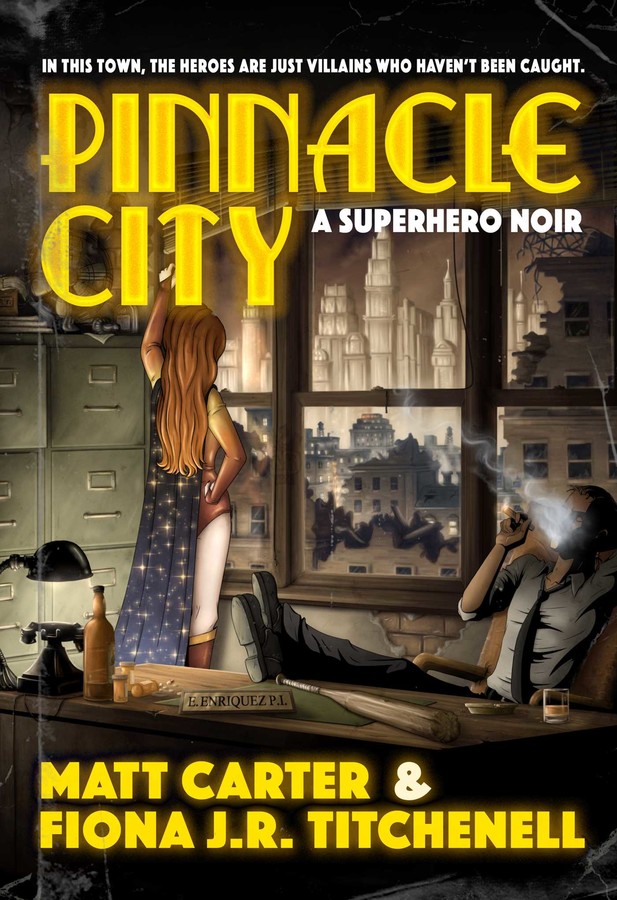 Pinnacle City is many things to many people. To some it is a glittering metropolis, a symbol of prosperity watched over by the all-star superhero team, the Pinnacle City Guardians. Beyond the glitz and glamour, there is another city, one still feeling the physical and economic damage of the superhero-villain battles of generations past. The lower class, immigrants, criminals, aliens, sorcerers, and non-humans alike call this city home, looking to make a living, which is becoming increasingly difficult as the two sides of the city seem prepared to boil over into a violent conflict.

Private investigator Eddie Enriquez, born with the ability to read the histories of objects by touch, still bears the scars of his time as a youthful minion for a low-level supervillain, followed by stints in prison and the military. Though now trying to live a straight-and-narrow life, he supports a drinking problem and painkiller addiction by using his powers to track down insurance cheats. When a mysterious woman enters his office asking him to investigate the death of prominent non-human rights activist Quentin Julian, a crime the police and heroes are ignoring, he takes the case in the hopes of doing something good.

Superhero Kimberly Kline has just hit it big, graduating from her team of young heroes to the Pinnacle City Guardians with the new codename of Solar Flare. With good looks, powers that include flight, energy manipulation, superhuman strength, durability, and speed, as well as a good family name, the sky is the limit for her. Upbeat, optimistic, and perhaps a little naïve from the upper-crust life she was raised in, she hopes to make her family, and the world, proud by being the greatest superhero she can be . . . but things aren't always as they seem.

From the minds of Matt Carter and Fiona J. R. Titchenell, Pinnacle City is a pulpy, throwback noir of yesteryear, where two unlikely people from opposite sides of the track must team up to do good in a world full of so much bad.

Matt Carter & Fiona J. R. Titchenell are married sci-fi, horror, and YA writers, who together have co-authored The Prospero Chronicles series. Matt has also written Almost Infamous: A Supervillain Novel, while Fiona has written Confessions of the Very First Zombie Slayer (That I Know Of). They live in sunny San Gabriel, California, with their pet king snake Mica.

“In this skillfully constructed secondary-world noir novel, having superpowers isn’t always so super, and everyone has something to hide. . . . By allowing everyone to be a little morally grey, Carter and Titchenell spin a superhero story with staying power.”
—Publishers Weekly (starred review)
"Pinnacle City embraces its own weirdness, which is a good thing. Solid characters with believable emotional arcs and good worldbuilding propel this unlikely story forward."
—Elitist Book Reviews
“A rollicking take on the all-American superhero tale. It’s Stan Lee meets Dashiell Hammett, with just a little Clive Barker thrown in for good measure.”
—Scott Kenemore, author of The Grand Hotel and Zombie, Ohio

“In this skillfully constructed secondary-world noir novel, having superpowers isn’t always so super, and everyone has something to hide. . . . By allowing everyone to be a little morally grey, Carter and Titchenell spin a superhero story with staying power.”
Publishers Weekly (starred review)