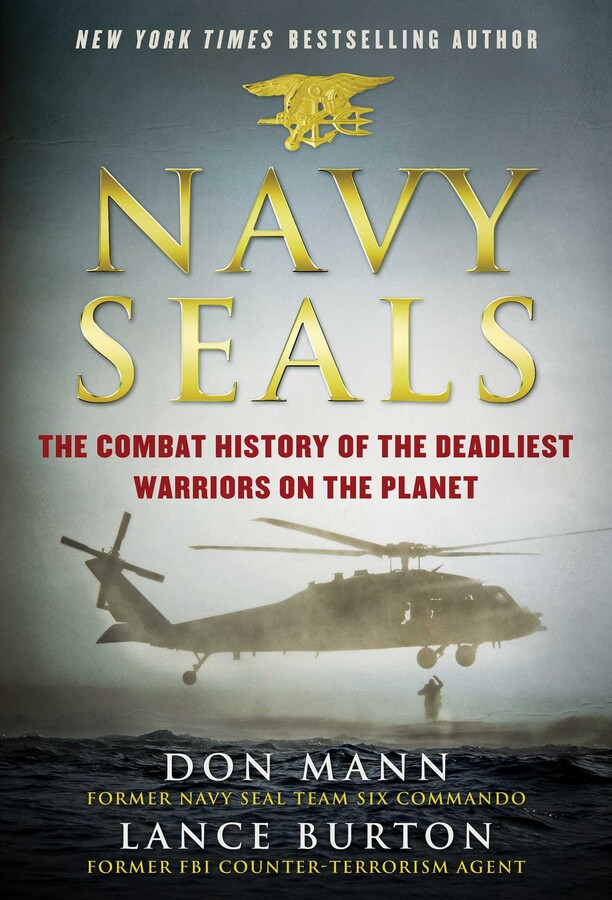 The Combat History of the Deadliest Warriors on the Planet

By Don Mann and Lance Burton
LIST PRICE £18.99
PRICE MAY VARY BY RETAILER

New York Times bestselling authorDon Man and Lance Burton tell the history of the most respected and feared fighting force every created—The US Navy SEALs.

“For those brave souls—past, present, and future—and those who wish to honor them—their story is in the pages that follow.”

From their birth in World War II as combat swimmers clearing the beaches of Normandy to their evolution into fighting men who could operate anywhere in the world by sea, air, or land, the intrepid story of the US Navy SEALs is one of courage, sacrifice, and world-renowned toughness that echoes of other great military units of history—the Spartans, the Roman legions, or the samurai. Take a look inside to find out what makes the SEALs America’s deadliest warriors.

This is a narrative history; stories based on either direct experiences or exhaustive research. Mann and Burton take the reader through the inception of the Naval Combat Demolition Teams (NCDU) and Underwater Demolition Teams (UDT) during World War II, their testing and development in Korea and into the Vietnam War, where the SEALs truly laid the groundwork for their legendary status, and on into the present day. The authors highlight the major steps and operations along the way, discuss the training and what it takes, and explore some of the most important moments in SEAL history.

“An engaging overview of these highly trained warriors....SEAL teams have been in nearly continuous combat for over 15 years, and the book provides some of the best tales of these missions, not only in Iraq and Afghanistan, but other regions of the world.”—New York Journal of Books

“Exceptionally informative and an inherently fascinating read from cover to cover, Navy SEALs: The Combat History of the Deadliest Warriors on the Planet will prove to be an immediate and enduringly popular addition to both community and academic library American Military History collections in general, and SEALs supplemental studies lists in particular.”—Midwest Book Review

“If you only read one book about the Navy SEALs—read this one.  At once entertaining and informative, Navy SEALs is the definitive history of this legendary group of warriors. Its combat vignettes, spanning WWII to present day, grab your attention and hold it from start to finish. The book is superbly crafted with a compelling narrative that not only chronicles the fighting history of the Navy SEALs but also includes commentary on the geopolitical context within in which the SEALs were sent to fight. It also is highly informative on the training that a recruit must undergo to become a SEAL and what makes the difference between those who are successful in this mighty quest and those who are not.  Easy to read and enjoyable, I highly recommend this book.”—Duane Evans, former CIA officer and author of Foxtrot in Kandahar: A Memoir of a CIA Officer in Afghanistan at the Inception of America's Longest War

“If you love military history, you will love this book. If you love special operations military history, you won't want to put this book down. After reading Navy SEALs, I learned more about the history of the Navy Frogman/SEAL legacy than I thought I knew. Born from the ancient warrior code and forged by events from World War II to the present, the U.S Navy SEAL mission has evolved as the times and threats have changed. This evolution is easier to understand when you know the history of the men who volunteered for  these highly secretive missions. Though the job has changed significantly, the men who perform these missions have not. Take a journey through military history and get to know the men who became Navy SEALs and those who made the ultimate sacrifice for our country. You will not be disappointed with this history book."—Stew Smith, author, fitness coach, and former Navy SEAL officer

"Excellent read! This is one of the most in depth books I’ve ever read regarding the Navy SEALS.  Don Mann and Lance Burton do an incredible job of taking the reader through the early UDT Frogmen in WWII to the warrior SEALs of today. Don Mann, retired Navy SEAL, gives the reader personal accounts from the indoctrination period, BUD/S, SQT, and ultimately having the Trident proudly pinned on their uniform, as well as some of his service to our county. Don and Lance share the stories of those SEAL heroes who went above and beyond the call of duty earning them the Congressional Medal of Honor. I would recommend this book to anyone who is thinking about or wanting to become a Navy SEAL or someone who just likes to read about the SEALs."—Jimmie Lobley, Former SRT/Deputy WCSO Sheriff's Office

"Hollywood 'SEALs' don’t come close to the authentic Navy SEALs. The real life depictions of SEALs and their operations around the world, as described by Don Mann in his most recent book, Navy SEALs: the Combat History of the Deadliest Warriors on the Planet, are at the same time frightening and inspiring. We should all be thankful for their dedicated service."—DJ Mallmann, CIA (ret.),  author of Shibboleth.

“Mann does a fine job giving readers the feel of what it’s like to be a member of the SEALs, from danger to camaraderie.” —Booklist

“Filled with the kind of knowing, immersive detail that can only come from someone with real-life experience in the field.”—Howard E. Wasdin, New York Times best-selling author of SEAL Team Six: Memoirs of an Elite Navy SEAL Sniper

"A riveting and accurate description of how special operations units actually conduct counterterrorist operations in the field.”—James Blount, former supervisor at the Central Intelligence Agency

The Combat History of the Deadliest Warriors on the Planet

By Don Mann and Lance Burton
LIST PRICE £18.99
PRICE MAY VARY BY RETAILER

SEE ALL
See more by Don Mann
Thank you for signing up, fellow book lover!