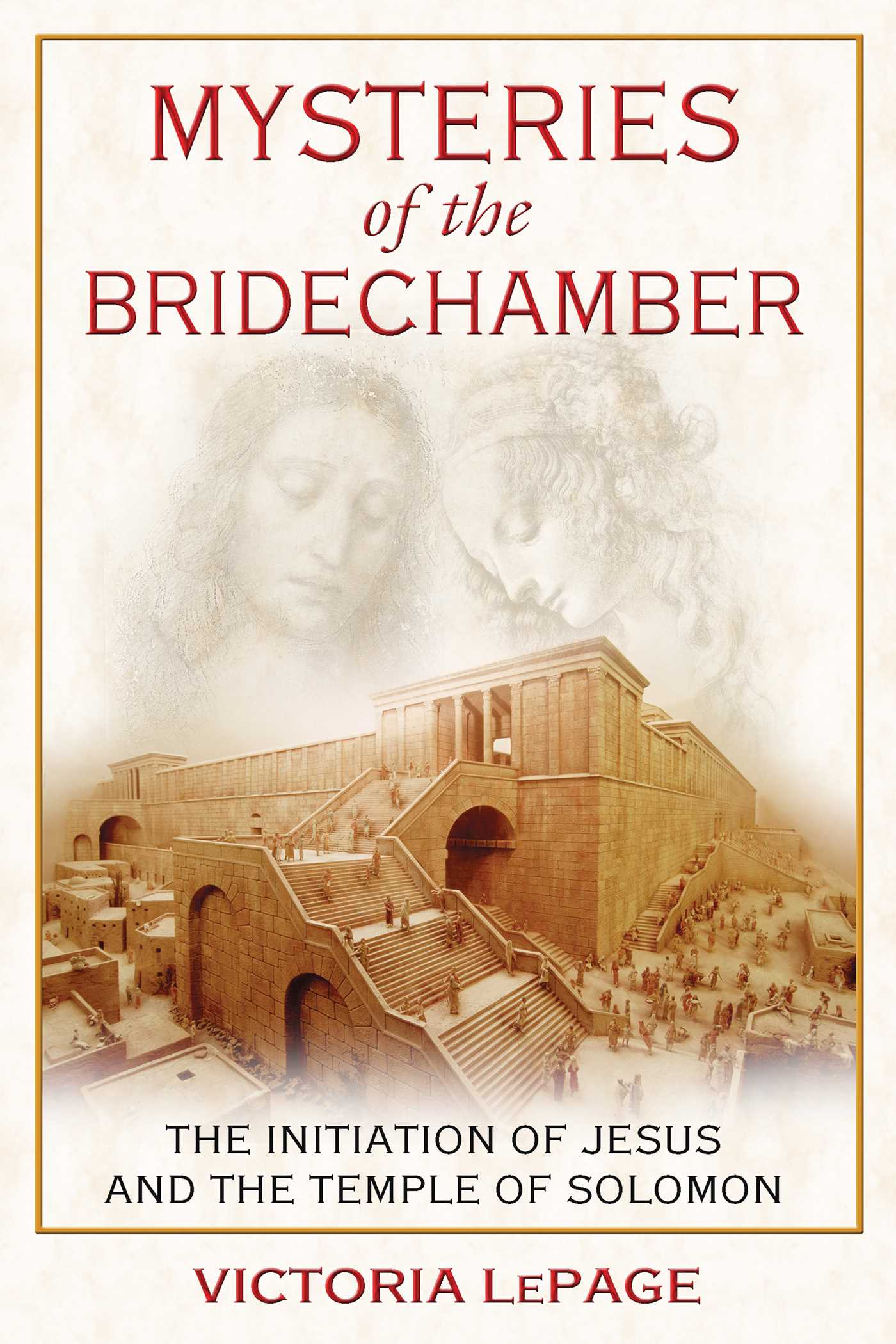 Mysteries of the Bridechamber

The Initiation of Jesus and the Temple of Solomon

By Victoria LePage
LIST PRICE £10.99
PRICE MAY VARY BY RETAILER

• Shows that Jesus sought to establish equity of masculine and feminine in both spiritual practice and social traditions, particularly in the sacrament of marriage

Jesus was a high-initiate and master adept of the ancient Judaic mysteries who strove to free people from the dead hand of the ritualists. He was trained in a dissident Jewish brotherhood that arose in Egypt before he was born, which sought to bring back the ancient Judaic mysteries outlawed by the Jerusalem temple. At the heart of this movement was a yogic-based practice known in the apocrypha as the Gnosis of the Heart, which espoused the union of both sexes in a secret initiatic teaching.

As a fearless social reformer, Jesus wanted to restore the authority of the feminine principle, including asserting the equality of man and woman in the social contract of marriage. He reinstated in his own life the tradition of sacred consortship--a rite known to early Church fathers as the bridechamber sacrament, whereby the marriage of the masculine and feminine energies was effected. This rite, Victoria LePage suggests, was the primary focus of Jesus’ teachings, the very heart of his exhortations to love thy neighbor, and the source of his healing power.

Mysteries of the Bridechamber explains how, as a master adept of the Temple of Solomon, Jesus derived these teachings directly from ancient Judaic mystery traditions, revealing both a life story for Jesus that differs markedly from the version the Church has offered as well as a spiritual practice based on a mystical wisdom tradition of self-initiation and transformation.

New spiritual currents are bathing the West: the wind of a changing zeitgeist blows through the world of the third millennium, promising a renewal of the spirit. And yet the widespread resurgence of interest in soul-care, in the occult, and in a spectrum of meditational and yogic practices from the East--in a word, the reawakening of a sense of the transcendent--is highlighting as never before the depth of the cultural/social crisis that besets us. Is it, some ask, the beginning of a spiritual renaissance or the last efflorescence of a dying organism?

After all the prophecies warning that Western civilization is dying, the imminence of the fact raises some interesting questions. Why has it been so violent, so rapacious, so loveless a reign? Why has it been so brief at its apogee, contrasting with the Egyptian civilization that lasted for nearly three thousand years? Above all, to what extent has Mother Church been at the root of our malaise, fostering a materialistic powerlust that has now spread to every corner of the earth?

The Canadian author John Ralston Saul believes we belong to an unconscious civilization, meaning one that lacks self-knowledge. Seduced by its new marketplace mythology, it lacks awareness of the underlying societal realities inherited from the past. But if he is right, it would be fair to say that the unconscious condition of Western civilization stems from the fact that it has been built on the foundations of an unconscious religion. Christianity too may be said to lack self-knowledge, to lack an effective grasp of its warlike history, its divisive philosophy, or its negative options for a peaceful future. Even more cogent is its lack of awareness of the antiquity and worldwide spread of its roots, or of its debt to pagan religious traditions that were old when the pyramids were built.

For nearly two thousand years the thrust of Christian doctrine has centered on one very powerful emotive belief: the salvific efficacy of Jesus’ death on the cross and his resurrection--a cosmic event that vicariously atoned for the sins of the world. But for many in the West that belief has now lost its force and its meaning. What drives the spiritual search today is of a more pragmatic nature: the need for a holistic philosophy that transcends racial and ideological differences, a moral and social vision capable of unifying rather than dividing peoples, a teaching that synthesizes the individual’s highest evolutionary aspirations.

This longing for unification--of the soul, of nations, of ideas--although frequently inarticulate, evokes the mood of the earliest phase of Christianity. The apocryphal gospels found at Nag Hammadi speak repeatedly of a bridechamber rite that offers the possibility of rebirth into the unitive consciousness of Christ, a rite of self-transformation in which the primal opposites find their resolution, conflict between the soul’s polarities is transcended, sorrow ceases with the coming of peace, and the soul at last “enters into her rest” (Gospel of Philip, Saying 82). This bridechamber sacrament, unknown to us today, was once the pivot on which the whole Judaeo-Christian movement turned, yet many centuries have passed since the mainstream Church celebrated it or aspired to its ideal of holy love.

Instead, competitive and adversarial attitudes have developed in the Church that divide rather than unite. Beneath all the pious declarations of accord there is a sense of extreme discord: ruptured relations between science and religion, between faith and knowledge, between individual and society, between the sexes, between humanity and nature, and a barrier of fundamentalist intolerance between Christianity and the rest of the world religions--a far cry indeed from the Sermon on the Mount. This confrontational style is a massive obstacle to the spirit of inclusiveness and synthesis that sped the infant religion on its way and must bear much of the responsibility for the carnage that is now rapidly consuming our entire world.

But the fact that a yoga of love is the engine that once secretly drove the very heart of Christianity is only one of the corrections that needs to be made to our innumerable misconceptions of what makes up a genuine religion. David Tacey, author of The Spirituality Revolution, suggests that, for the younger generation especially, less piety and more informed knowledge of religious history would be welcomed. Tacey, associate professor of Religious Studies at La Trobe University in Melbourne, Australia, believes that even though the sacred motifs of the religion are now losing their potency in their traditional form, their symbolism--their essence or universal spiritual meaning--must be understood if they are to be reborn in a form more effective for the times. Yet for such a task the Christian establishment seems ill equipped.

Our present religious institution reflects almost nothing of the rapture of spiritual creativity that poured forth from the core of the new Jesus movement during the first and second centuries. In those days its agenda was nothing less than to shift the locus of control, both emotional and intellectual, from the externalized government of the gods and goddesses of pagan antiquity to the inner governing center of every human being. This elevation of the self over the authority of the community was so radical a change in spiritual direction that it could scarcely be conceptualized but remained a powerful underlying motive force in the new religion that overcame all before it. It is impossible now for Christians to recapitulate that early spiritual magic, for the shift from outer to inner authority and power is no longer possible in its original form. The sacramental mechanism by which it was effected--that is to say, the bridechamber rite within a system of graded initiation--was excised from the religion within three centuries of its birth. That sacrilege is now returning to haunt us.
Victoria LePage

Victoria LePage has published numerous articles on the new spiritual paradigm emerging in cultures worldwide and is the author of Shambhala: The Fascinating Truth Behind the Myth of Shangri-la, published in ten foreign languages. She lives in Australia.

“Mysteries of the Bridechamber contributes an astonishing wealth of lore to the discourse surrounding the original teachings of Jesus. Centered in the ancient and universal esoteric rites of hieros gamos, these teachings illuminate the ‘Way’ of harmonious reconciliation of head and heart, reason and compassion, Logos and Sophia.”

– Margaret Starbird, author of The Woman with the Alabaster Jar and Mary Magdalene, Bride in Exile

"It is no less than a complete manual of metaphysical knowledge and science, all in one marvelous volume."

" . . . assuming the reader is possessed of an open mind, the potential exists for opening vast new perspectives--some of which will seem blindingly obvious in hindsight and some of which will creep up on the reader. . . . There is much of value [here] and much of it is accessible with only a modicum of effort."

Mysteries of the Bridechamber

The Initiation of Jesus and the Temple of Solomon

By Victoria LePage
LIST PRICE £10.99
PRICE MAY VARY BY RETAILER