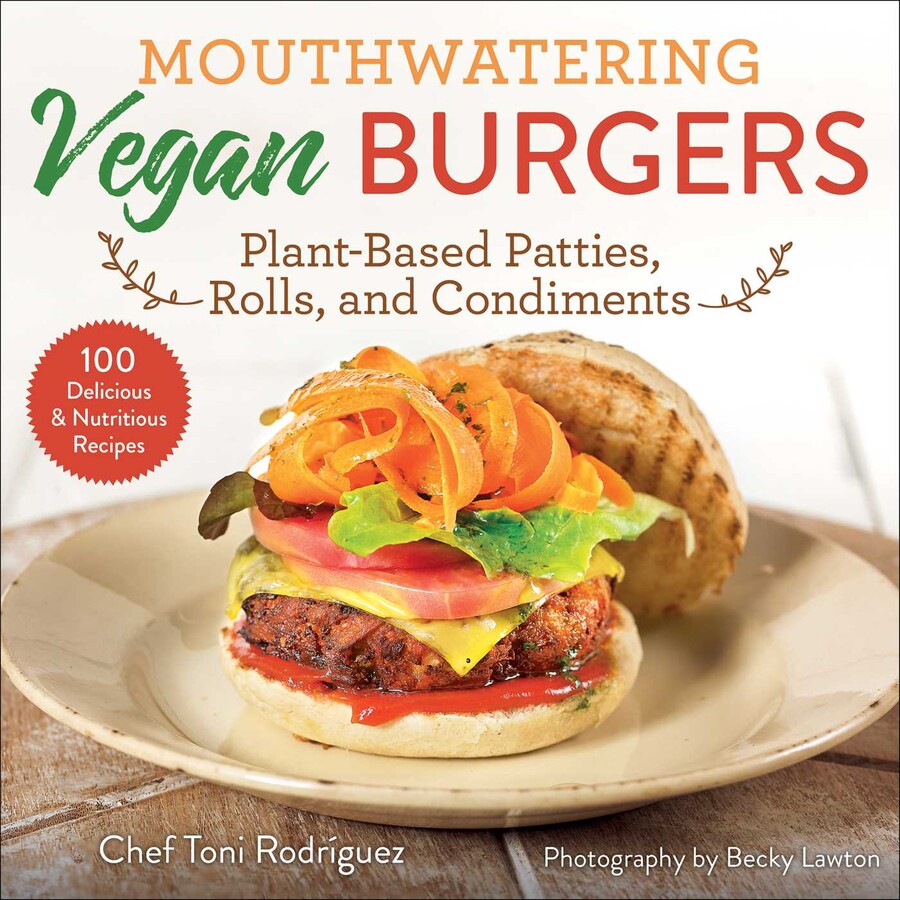 Spanish chef Toni Rodríguez makes cooking vegan simple and eating vegan delicious! Eating vegan is a conscientious choice that enables people to care not just for their appetites but for their overall health, ethical beliefs, and ecological responsibility. For those with special dietary needs or weight-control concerns, veganism offers a delicious alternative diet of grains, fruits, vegetables, legumes, and other plant-based proteins.

Here, Rodríguez presents a collection of recipes for tasty vegan burgers that will leave you satisfied without guilt. Also included are recipes for delectable sauces, savory burger buns and sides, and even luscious desserts. Eating healthy and ethically never tasted so good! Fire up the grill and get ready to sink your teeth into these amazing recipes, including:

Beautiful, tempting photos accompany the recipes, and Rodríguez shares his story and the delights of veganism. A quick list of useful kitchen accessories and thorough descriptions of basic vegan burger ingredients guide readers around the vegan kitchen. Whether you’re a committed vegan or just curious, there’s more than a few favorites waiting to be discovered in this book.

The first time I saw a vegan or vegetarian burger was in 2002. My sister had just become a vegetarian, while I never wanted to so much as look at a vegetable. She used to buy dense, hard veggie burgers from the nearby health food store that were nothing like the products offered today. After trying one once, I thought I could never be a vegetarian.

Much has changed since then. Most of the vegetarians and vegans I know love to cook. They experiment in the kitchen, working on making rich and delicious recipes for burgers, sausages, pies, croquettes, and more. There is a much wider variety of ingredients used to make products like veggie burgers, including whole grains, vegetables, and proteins. In the eleven years that I have been a vegetarian, I have tried hundreds of different kinds of veggie burgers: grilled, fried, baked, raw, made from vegetables, grains, legumes, seitan, tofu, tempeh, or mushrooms. I have seen veggie burgers made by friends, in restaurants, or made in my own kitchen.

I have tried plenty of burgers, especially recently. Even many companies in the meat industry are producing veggie burgers to try to enter this market.

Health-conscious consumers are refusing to eat meat because of the way animals are treated. We are experiencing a major change in our diets. Many people no longer see vegan burgers the same way I saw them in 2002. They see something appealing and tasty and are curious to try them when they see them on a menu in a restaurant.

If you search for “veggie burgers” online, you’ll be surprised to see how many sites feature vegetarian or vegan recipes. You’ll also see veggie burgers in many upscale restaurants, topped with vegan dressings like a soymilk-based mayonnaise without egg. For example, the Iglesias brothers of the restaurant Adria (leaders in modern cuisine) offer a veggie burger made from mushrooms. Even hamburger cookbooks feature vegetarian recipes. If I had been told in 2003 about the international popularity of veggie burgers, I would not believe it. I cannot even imagine what kind of change we may see in the next few years.

In Spain, we can find some delicious vegan burgers at Gopal, Cat Bar, Ale-Hop, B13, among others. These restaurants not only feature vegan burgers, but also other snacks such as tortillas, vegan potato croquettes, empanadas, and cakes. As I write this book in 2014, I know that we will see many more vegan burgers featured in restaurants in major cities across the country. Restaurants such as Shake Shack, Hard Rock Cafe, Home Burger Bar, Gobu Burger, and La Royale serve very interesting sandwiches for vegetarians and vegans.

The vegan lifestyle and burgers are totally compatible—we just don’t use any ingredients with animal origins.


To make the black bean burgers:

salt and pepper to taste

1. Mash the black beans in a bowl with a fork. Add the minced garlic and onion. Place the seitan, parsley, and cilantro in the bowl of a food processor and chop finely.

2. Add the paprika, seitan mixture, oregano, olive oil, and salt and pepper to the black bean mixture, and mix until the ingredients are all well blended. Little by little, stir in the breadcrumbs. Mix by hand until the mixture holds together.

3. Form eight patties, and cook them in a pan with a little oil over medium heat.

To assemble the burgers:

1. Slice the buns in half and spread chipotle mayonnaise on both halves. Top the bottom halves with a few leaves of lettuce, then the burger patties, followed by the pico de gallo on top. Finish with the top bun.

2. Heat the burgers for a few minutes in the oven at 400° before serving.
Toni Rodríguez