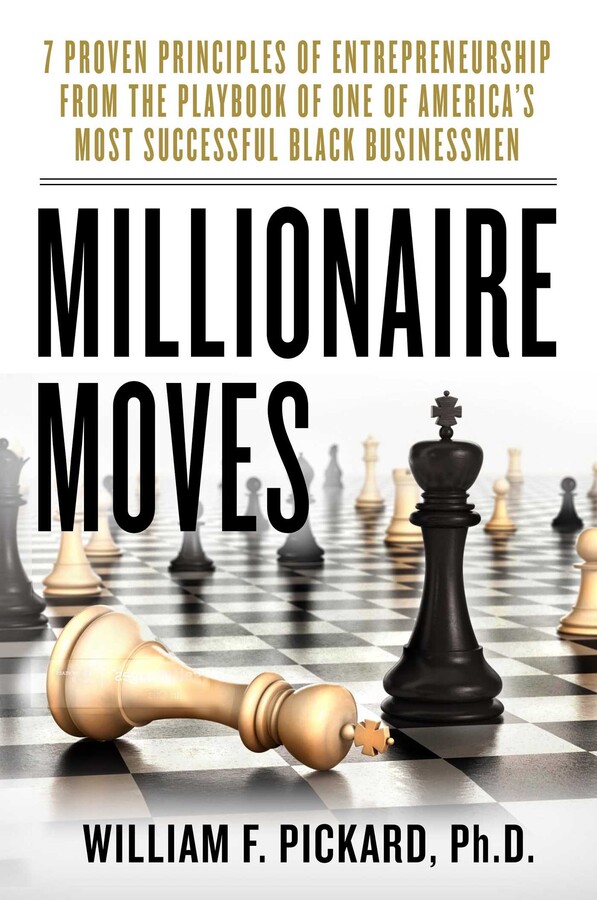 These words get me fired up! They also explain the purpose of this book. This is my way of giving back, and it’s my way of saying that whatever I’ve done, you can do it, too. It doesn’t matter who you -- are a blue collar worker, an MBA grad, a new business owner, or a student working nights to pay your way through school.

Millionaire Moves: Seven Proven Principles of Entrepreneurship is a down-to-earth, relevant and riveting glimpse into the professional journey of one of the country’s most successful black businessmen, William F. Pickard, Ph.D. Dr. Pickard details the highs and lows of his entrepreneurial evolution in an authentic, instructive, and sometimes humorous manner. Young entrepreneurs will be inspired by lessons learned from his bookie uncle, loyal colleagues and determined competitors. They’ll also take a little trip through time as he shares the stories of other hard-working men and women who made it – despite the odds. The valuable tips and proven tools provided by Millionaire Moves are essential for anyone striving to achieve the next level of success.

Pickard's forty-five-year entrepreneurial career began as a McDonald's franchisee in Detroit, Michigan. In 1989, he founded an Automotive Manufacturing Company and grew it into Global Automotive Alliance, Logistics and Manufacturing companies with more than one half billion dollars in sales and eight plants in the U.S. and Canada. GAA services corporations such as Boeing, Mercedes Benz, Ford, General Motors, Chrysler, Delphi, Johnson Controls, Starbucks, Home Depot and Merck Pharmaceutical.

He has served on numerous business and non-profit boards including Asset Acceptance Capital Corporation, Michigan National Bank, LaSalle Bank, Business Leaders for Michigan, National Urban League, Detroit Symphony Orchestra, Detroit Black Chamber of Commerce and is a life member of Alpha Phi Alpha Fraternity. In 2001, Pickard was awarded Michiganian of the Year for his business success, civic leadership and philanthropy. Pickard was the first chairman of the African Development Foundation in 1982, appointed by President Ronald Reagan, and under President George Bush he was appointed to The National Advisory Committee on Trade Policy Negotiations (1990) the Federal Home Loan Bank Board-Indianapolis Bank in Indiana (1991).

Dr. Pickard is also creating a new generation of entrepreneurs with Millionaire Moves - Seven Proven Principles of Entrepreneurship, vision/attitude, opportunity, relationships, talent/skillset, financial, failure and faith. Dr. Pickard will share his undeniable principles anyone can use to become a successful entrepreneur.