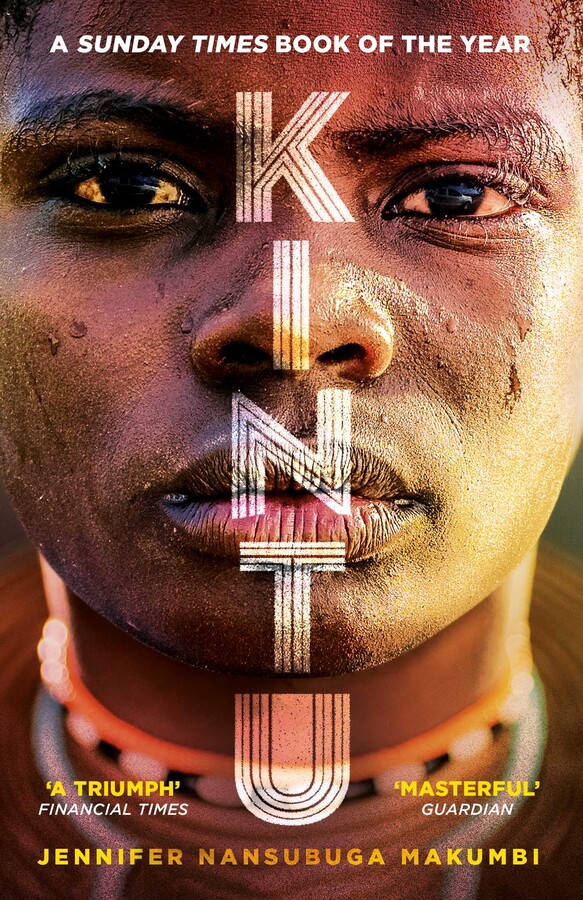 In this epic tale of fate, fortune and legacy, Jennifer Makumbi vibrantly brings to life this corner of Africa and this colourful family as she reimagines the history of Uganda through the cursed bloodline of the Kintu clan.

The year is 1750. Kintu Kidda sets out for the capital to pledge allegiance to the new leader of the Buganda kingdom. Along the way he unleashes a curse that will plague his family for generations. Blending oral tradition, myth, folktale and history, Makumbi weaves together the stories of Kintu’s descendants as they seek to break free from the burden of their past to produce a majestic tale of clan and country – a modern classic.

'It seethes with energy and teems with memorable characters.'

‘Kintu is an important book. It is also a very good one...inventive in scope, masterful in execution, [Jennifer Nansubuga Makumbi] does for Ugandan literature what Chinua Achebe did for Nigerian writing.’

‘Ugandan literature can boast of an international superstar in Jennifer Nansubuga Makumbi, whose debut novel Kintu is a multi-generational saga that ties oral myth to a recognisable present.’

‘Jennifer Nansubuga Makumbi's Kintu has been called a Ugandan One Hundred Years of Solitude.’

‘Kintu is a triumph of east African literature and one that delights in the pliant nature of storytelling itself, the ways in which family lore is passed down and the impact of variations on it... This rich drama examines the power of such legacies, and the potential for even the most far-flung, estranged families to unite in the face of ages-old evil.’

‘Epic both in intention and execution, Kintu contains a vast number of characters, avenging ghosts and portentous visions...the final coming together of the entire Kintu clan, arrived at with precision and intricacy, makes for a satisfying and thoughtful denouement.’

'A Ugandan masterpiece that traces a family curse across the generations.'

‘A soaring and sublime epic. One of those great stories that was just waiting to be told.’

‘A family saga that reaches back into that country’s history with an assurance and readability that makes its historical depth feel light as water.’

‘A multi-character epic that emphatically lives up to its ambition.’

'[Makumbi writes] with the assurance and wry omniscience of an easygoing deity...'

‘The most important book to come out of Uganda for half a century.’

– Giles Foden, author of The Last King of Scotland

‘I recommend Jennifer Nansubuga Makumbi’s Kintu, a sprawling, striking epic...It reminded me of some of my favorite long novels from the past few years, including Marlon James’s A Brief History of Seven Killings, Eka Kurniawan’s Beauty Is a Wound, and Annie Proulx’s Barkskins.’

‘With crisp details and precise prose, Makumbi draws us into the dynamic and vast world of Uganda – its rich history, its people’s intricate beliefs, and the collective weight of their steadfast customs.’

'Two books that immediately come to mind, in trying to make sense of Jennifer Nansubuga Makumbi's ambitious new novel Kintu, are Christos Tsiolkas's The Slap and Chinua Achebe's Things Fall Apart... That said, the overwhelming scale and sweep of Makumbi's effort stands in dramatic contrast with these novels.'

‘Kintu is a masterpiece, an absolute gem, the great Ugandan novel you didn't know you were waiting for.’

‘Epic in every sense of the word.’

‘A lush and epic story.’

‘A masterpiece of cultural memory, Kintu is elegantly poised on the crossroads of tradition and modernity.’

‘Kintu got me through many a quiet evening... It’s an epic read, best taken at a steady pace, which begins in 1750 and culminates in the present day, simultaneously exploring the role of family bonds, ancestral legacies, and the state of modern Uganda. It deserves hefty British sales when it comes out here in January.’

‘In this captivating multigenerational family saga, Makumbi has gifted us with an exquisite and powerful debut. Written in delightful prose, bold and ambitious, Kintu is easily one of the best novels I have read this year.’

‘A bold, sweeping epic, ambitious and very well crafted. The kind of book you hope everyone will read.’

– Tendai Huchu, author of The Hairdresser of Harare

‘A work of bold imagination and clear talent.’

‘This is an extraordinary novel about a family bound together by love, betrayal, and an age-old curse, told in gripping language that continually surprises. A literary triumph.’

– Maaza Mengiste, author of Beneath the Lion's Gaze

‘Makumbi takes a sniper’s aim at the themes of virility and power across time. Over the course of six rich sections, she fires not a single gratuitous shot.’

‘Powerful, vibrant and deeply engrossing, this is a thoroughly rewarding read – and we’re sure, a worthy new entry to the African literature canon.’

‘Passionate, original, and sharply observed... This critically acclaimed modern classic is expansive in its scope and range. A bold and multilayered novel which is at once Uganda’s national narrative as well as a compelling tale of family and blood ties.’

‘History in the form of an unrelenting curse pervades the present in this epic novel that questions if we can ever fully recover from the wounds of the past.’

‘Makumbi’s characters are compelling as individuals, but it is their shared past and journey toward a shared future that elevate the novel to an epic and enigmatic masterpiece.’

‘Some authors set the bar high with their debut work. Then there are authors like Jennifer Nansubuga Makumbi whose first novel succeeds on such a stratospheric level it’s nearly impossible to imagine – or wait for – what she’ll write next.’

‘Kintu is by far my favorite book of the year (perhaps of the past several)…absolutely unforgettable.’

‘Makumbi is clearly a creative genius.’

‘An ambitious modern epic that takes in family saga and the history of Uganda, fusing the urgency of the present with the timelessness of myth.’

‘Kintu is not just the story of a family, but a story of Uganda, a country whose history begins before colonization and encompasses far more than just that chapter.’

‘Our histories and our names have stories that we cannot afford to keep quiet about.’

‘Postcolonial literature is often thought of as a conversation between a native culture and a Western power that sought to dominate it... Jennifer Nansubuga Makumbi’s marvellous Ugandan epic, Kintu, explodes such chauvinism.’

‘Jennifer Makumbi’s Kintu is a charming fable, a wide-ranging historical fiction, and a critical historiography...fresh, intelligent, critical, and ambitious.’