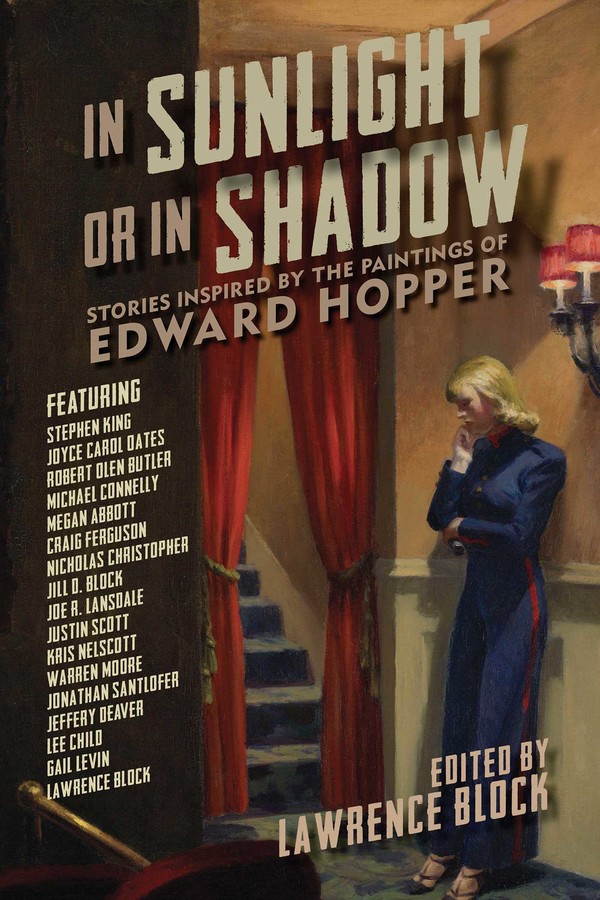 In Sunlight or In Shadow

Stories Inspired by the Paintings of Edward Hopper

A truly unprecedented literary achievement by author and editor Lawrence Block, a newly-commissioned anthology of seventeen superbly-crafted stories inspired by the paintings of Edward Hopper, including Jeffery Deaver, Joyce Carol Oates, Stephen King, Lee Child, and Robert Olen Butler, among many others.

"Edward Hopper is surely the greatest American narrative painter. His work bears special resonance for writers and readers, and yet his paintings never tell a story so much as they invite viewers to find for themselves the untold stories within."

So says Lawrence Block, who has invited seventeen outstanding writers to join him in an unprecedented anthology of brand-new stories: In Sunlight or In Shadow. The results are remarkable and range across all genres, wedding literary excellence to storytelling savvy.

In a beautifully produced anthology as befits such a collection of acclaimed authors, each story is illustrated with a quality full-color reproduction of the painting that inspired it.

"If a picture is worth a thousand words, any of Edward Hopper’s paintings of American loneliness is worth an entire short story. Ekphrasis—seeing a story in a picture—was seldom so much fun."

"Superbly conceived and executed. With stunning imagination, narrative power and arresting prose, each story succeeds individually and contributes to the overarching excellence of Block’s anthology. A unique collection that blends art as literature and literature as art, In Sunlight or in Shadow also explores the origins of inspiration and showcases the brilliance that flows from the fertile psyches of the talented."

"Absolutely superb. A fascinating concept. Every story is superlative. Hopper deserves a tribute of this grace and sensitivity."

"Block has assembled a superb and very varied group of writers to spin their own golden thread from Hopper's raw flax. It's a sumptuous production in beautiful hardback."

"Edward Hopper, the painter of American loneliness, inspires a selection of short stories from a host of notable writers. This strong collection begins in a spirit of homage but winds up showing how powerful inspiration can be."

"Iconic American painter Edward Hopper serves as muse for editor Block and an impressive array of 16 other writers who select their favorite paintings to inspire a short story. A remarkable collection."

"For anyone who has puzzled over the vividly evocative—yet frustratingly enigmatic—works of the beloved Edward Hopper, this little volume is the perfect gift. Short stories by 17 writers—some famous, like Joyce Carol Oates and Stephen King, some less so—dramatically start where the paintings leave off."

"A great idea and a strong collection. This book is a must for Edward Hopper fans, and anyone interested in the intersection of visual art and fiction."

"One of the most varied and yet rewarding story anthologies to appear in a long time. Belongs on the top of the reading pile of every crime, mystery, and horror fiction fan."

"An anthology of conspicuous brilliance. A grand, masterly anthology."

"Without doubt, Alfred Hitchcock would be pleased. Hopper and Block, master mesmerists."

"Block asked 17 writers to write a story generated by Hopper paintings. The combined effect is ingenious, engrossing, and at times deliciously menacing."

In Sunlight or In Shadow

Stories Inspired by the Paintings of Edward Hopper