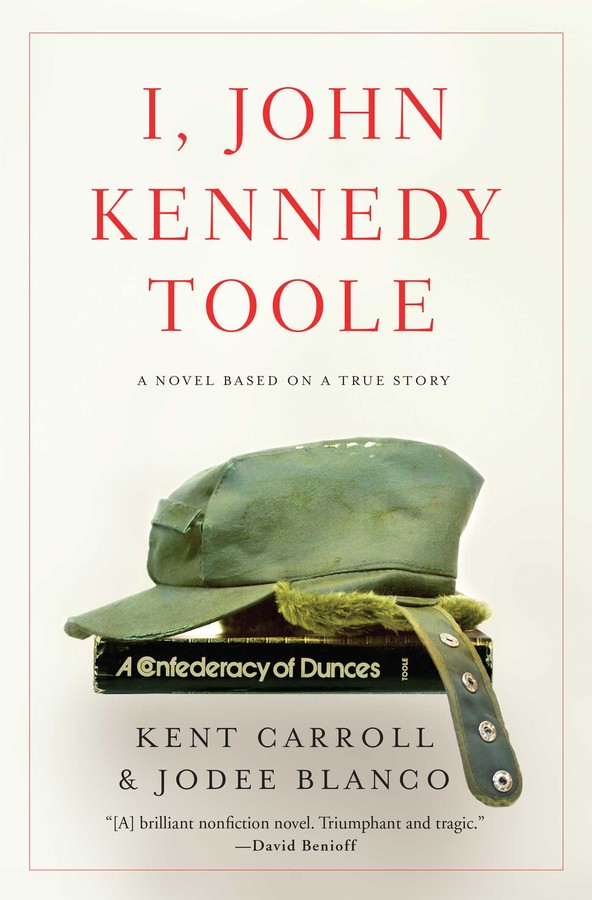 A rich new novel that explores the true story of A Confederacy Of Dunces and the remarkable life of its author, John Kennedy Toole.

I, John Kennedy Toole is the novelized true story of the funny, tragic, riveting narrative behind the making of an American masterpiece.

The novel traces Toole’s life in New Orleans through his adolescence, his stay at Columbia University in New York, his attempts to escape the burden of his demanding mother and his weak father, his retreat into a world of his own creation, and finally the invention of astonishing characters that came to living reality for both readers (and the author himself) in his prize-winning A Confederacy of Dunces.

The other fascinating (and mostly unknown) part of the story is how after a decade of rebuke and dismissal the novel came to a brilliant author, Walker Percy, and a young publisher, Kent Carroll, who separately rescued the book, then published it with verve and devotion.

The novel that almost never came to be went on to win a Pulitzer Prize and continues to sell at a satisfying rate as it winds its way to the 2 million mark. That audience is the happy ending for this brilliant, unrepentant writer, whose only reward before his untimely death was his unending belief in his work and his characters.

Kent Carroll is the former editor-in-chief at Grove Press, the former publisher of Carroll & Graf, and the co-founder and publisher of Europa Editions. He has published Samuel Beckett, Henry Miller, John Kennedy Toole, Jane Gardam, and Elena Ferrante, among other notable authors. He divides his time between Manhattan and East Hampton.

Jodee Blanco is the author of two New York Times bestsellers: Please Stop Laughing at Me, a memoir that became the seminal book for the anti-bullying movement, and a biography of a movie star in which she told the truth against all odds. She lives in Chicago.

“This novel tells the real-life story behind A Confederacy of Dunces, the cult classic that won a Pulitzer after Toole, its author, committed suicide. Carroll has a direct link to the material: He is the publisher who brought Toole’s book to light.”

“A boisterous fictional take on the life and career of author John Kennedy Toole. This love letter to Toole fans offers plenty of insights into the tragic literary figure.”

“The dramatization of publishing-world machinations is as fascinating as Toole’s life.”

“Every fan of A Confederacy of Dunces has read the Walker Percy foreword. We all thought we knew the story of how John Kennedy Toole’s novel found its way into readers’ hands after the author’s suicide. Boy, did we not know the story. Kent Carroll and Jodee Blanco’s brilliant non-fiction novel gives us the goods, and then some. Illuminating and devastating, triumphant and tragic, I, John Kennedy Toole tells the tale of a dream deferred, of genius ignored.”

"I still remember A Confederacy of Dunces well and remember how exciting it was to find such a book. I've read I, John Kennedy Toole with great pleasure—it's an engrossing account of a wonderful writer. A novel all John Kennedy Toole fans will want to read. I think you'll have a great success with it.”

– Andrew Miller, author of Pure and Now We Shall Be Entirely Free

“I, John Kennedy Toole is a vivid exploration of every writers’ nightmare—of writing the best she or he possibly can to create a book that would become a standard-bearer for decades to come, but not getting it published until it's way too late.”

“A fresh take on the patron saint of ever-hopeful, struggling artists everywhere, I, John Kennedy Toole is equal parts captivating and heartrending. Written by consummate publishing insider Kent Carroll and Jodee Blanco, this entertaining novel is sure to delight not only fans of the Pulitzer Prize-winning A Confederacy of Dunces, but any reader fascinated by the creative process. In the capable hands of Carroll and Blanco, the fictional Toole emerges as a literary cousin of his celebrated creation Ignatius Reilly.”

– Seth Greenland, author of The Hazards of Good Fortune and I Regret Everything

"A wonderful read, with writing as deliciously arch as Toole himself and the real story of our times: the tragedy of untapped potential. I love the twisting time frame!"

“I, John Kennedy Toole is a well-researched novel that fans of Toole’s A Confederacy of Dunces will want to read.”

“But given the aura around Toole’s life, it is a pleasure to spend some time with him, if only to rue the books he never had a chance to write.”

“The story behind John Kennedy Toole’s groundbreaking A Confederacy of Dunces is as colorful as the novel itself. I, John Kennedy Tooleis the novelized true story of the riveting narrative behind the making of an American masterpiece. It traces Toole’s life in New Orleans, through his adolescence, his stay at Columbia University, his attempts to escape the burdens of his parents, and the invention of characters that came to living reality in his Pulitzer-Prize winning book.”