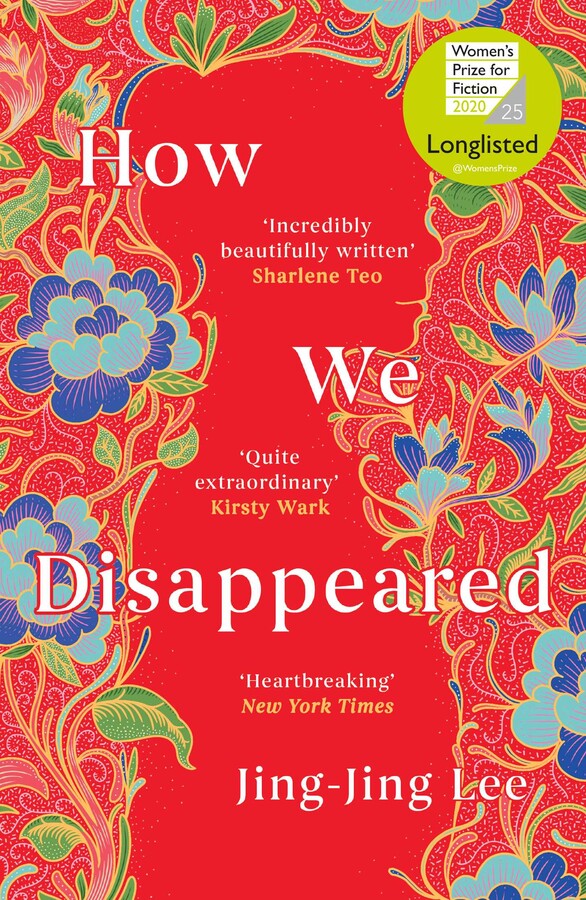 LONGLISTED FOR THE WOMEN'S PRIZE FOR FICTION 2020

Shortlisted for the 2020 Singapore Literature Prize

Longlisted for the HWA Debut Crown

Singapore, 1942. As Japanese troops sweep down Malaysia and into Singapore, a village is ransacked. Only three survivors remain, one of them a tiny child.

In a neighbouring village, seventeen-year-old Wang Di is bundled into the back of a troop carrier and shipped off to a Japanese military rape camp. In the year 2000, her mind is still haunted by her experiences there, but she has long been silent about her memories of that time. It takes twelve-year-old Kevin, and the mumbled confession he overhears from his ailing grandmother, to set in motion a journey into the unknown to discover the truth.

Weaving together two timelines and two life-changing secrets, How We Disappeared is an evocative, profoundly moving and utterly dazzling novel heralding the arrival of a new literary star.

‘A heartbreaking but hopeful story about memory, trauma and ultimately love.’

‘This heartbreaking story explores shame and secrecy through two timelines, woven together in this deeply moving novel. A quite extraordinary book.’

‘A powerful tale of wartime Singapore and the shame of silence...haunting... Read it and weep, read it and marvel, but above all, read it.’

‘The brilliance of the writing makes it harder to bear. It’s powerful and profound.’

‘A haunting and vivid account of Singapore's fall...beautifully crafted... A writer to watch from a fascinating part of Asia where great civilisations meet.’

‘Compelling... a visceral yet tender exploration of truth and its consequences, and the redemptive power of memory.’

‘A beautifully written, suspenseful story of redemption and healing.’

‘An elegiac and at times extremely harrowing novel... How We Disappeared bears unflinching testimony to war crimes that are still on the brink of living memory.’

‘A beautifully controlled novel that tells an utterly compelling and important story. Jing-Jing Lee's prose is crystal clear, the narrative scope is sweeping and devastating, and the story is as deeply felt and well observed as it is captivating.'

'Lee's harrowing novel ventures into one of Singapore's darkest periods... This novel bears unflinching, vital testimony to war crimes and those who have fallen through the cracks of history.'

'This novel unflinchingly examines the horrific acts carried out in Singapore during the Second World War, but manages to be hopeful and uplifting, too.'

‘Raises poignant questions regarding multi-generational trauma, accelerated modernization, and changing identity… Lee vibrantly describes life in pre-occupation Singapore, managing to cinch both the particularity and the universality of oppression.’

'Jing-Jing Lee writes like a poet... This was a hard story to tell, to hear and to read, but it is also an important story which demands to exist and Jing-Jing Lee has brought it to life... Congratulations. Every single hour I spent reading this was an hour which could not have been better spent.'

– Catherine Chanter, author of The Well

‘Heartbreaking and meticulously researched, this novel is a meditation on the legacy of violence.’

‘A heartbreaking story told with such humanity and grace. The details of How We Disappeared are so vivid they return to me in dreams.’

'A shattering, tender and absorbing novel… Meticulously researched, exquisitely written, with characters that will live and breathe in your heart long after you finish the last page... I’m reeling from its power—what an absolute triumph.'

‘The dazzling storytelling illuminates the brutalities of life in Japanese-occupied Singapore... Haunting, harrowing, sweeping and compelling, this is a courageous story of survival, memory, and how we deal with trauma.’

'How We Disappeared is a masterpiece of storytelling. Evocative and heart rending, it tells of one woman’s survival in occupied Singapore, and the quest of a child to solve a family mystery. It is beautifully written, exquisitely crafted, and utterly compelling.'

– Mary Chamberlain, author of The Dressmaker of Dachau and The Hidden

‘Based on true events, which Lee gives a dignified voice to. Deeply affecting.’

‘This is a brilliant, heartbreaking story with an unforgettable image of how women were silenced and disappeared by both war and culture.’

– Xinran, author of The Good Women of China

'How We Disappeared is a remarkable, original novel that uncovers the long-silenced atrocities that the ‘comfort women’ in Singapore suffered at the hands of the Japanese during WWII. Through gorgeous prose, tremendous pathos, and even humor, Jing-Jing Lee portrays the intersection of past and present and the courage to bear witness. How We Disappeared is an important, spell-binding debut.”

– Spencer Wise, author of The Emperor of Shoes

'An exquisite mystery, an enthralling novel. Equally touching and intriguing, How We Disappeared is a soaring debut of surviving the unsurvivable [and] a searing and shocking reminder of a history many would like to forget, and of the endurance of the human spirit.'

‘Jing-Jing Lee's novel is a testament to...strength in the face of profound cruelty.’

‘Memory and forgetting are at the heart of How We Disappeared... Lee's novel shines a light into the darkest chapter of Singapore's history.’

‘A powerful and confronting story... How We Disappeared puts a blowtorch to our emotions.’

‘A story of survival and endurance in Japanese-occupied Singapore.’

LONGLISTED FOR THE WOMEN'S PRIZE FOR FICTION 2020