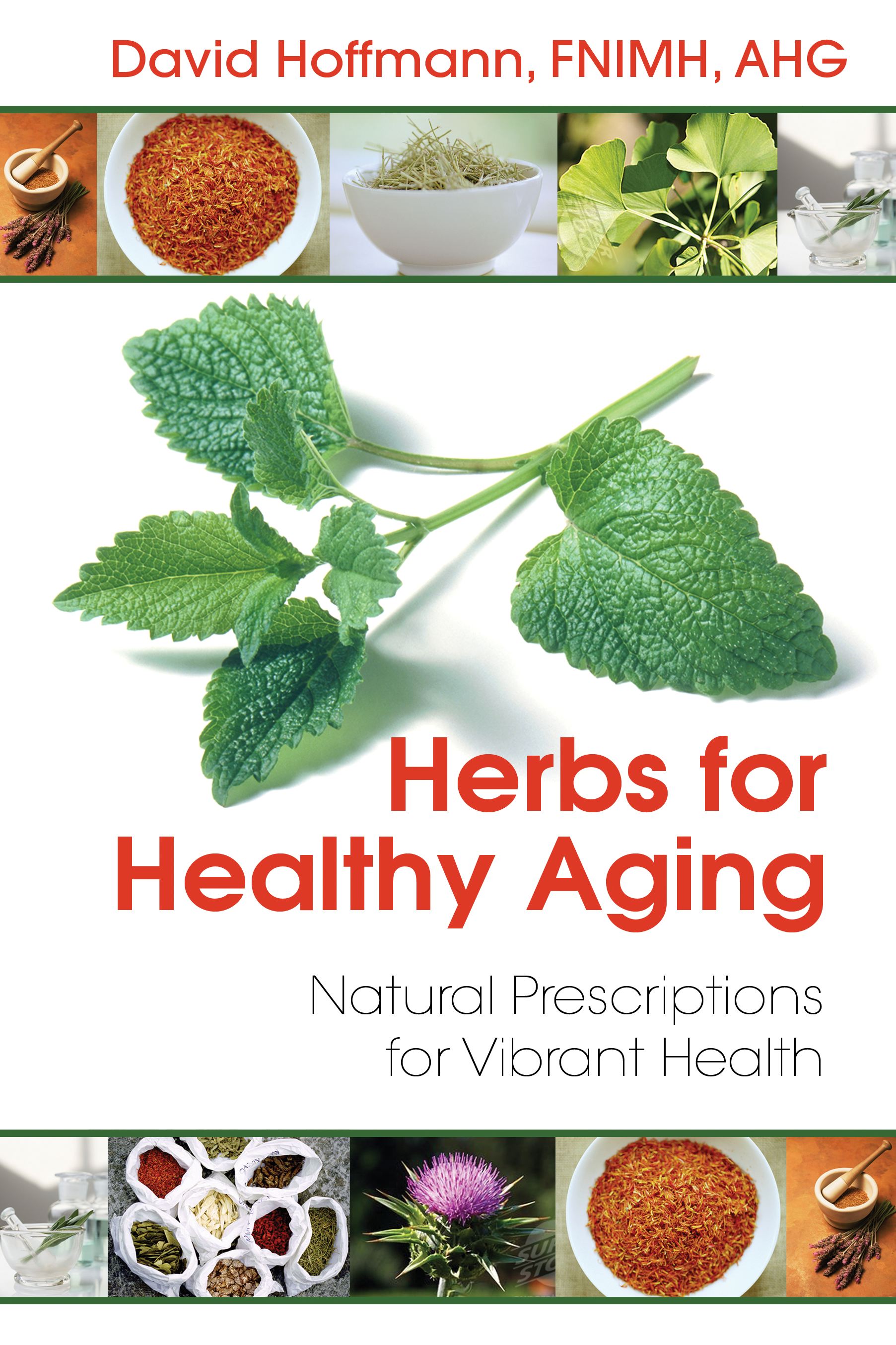 By David Hoffmann
LIST PRICE £16.99
PRICE MAY VARY BY RETAILER

In this herbal guide to healthy aging, medical herbalist David Hoffmann discusses how to maintain the body&#8217;s vitality as we age and how to treat and prevent the health concerns brought about by aging. He provides herbal treatments to restore and protect each of the body&#8217;s major systems--from the muscles, bones, and digestive system to the pulmonary, cardiovascular, and reproductive organs--as well as herbal remedies for specific ailments such as prostate enlargement, hot flashes, hypertension, insomnia, bronchitis, varicose veins, and arthritis. He shows how herbs can help minimize dependence on conventional medical treatments and provide a safe and welcome alternative to the unpleasant and sometimes dangerous side effects of synthetic drugs. In the materia medica, Hoffmann details more than 150 health-promoting herbs and their actions on the body and mind, preparation methods, and recommended dosages. This authoritative guide to herbal preventive medicine offers holistic treatments designed not only to promote vibrant health but also to provide a way to age with grace.

PLANTS STILL MAINTAIN a central position today in orthodox medical treatment of various heart problems. Herbs containing constituents called cardiac glycosides are used worldwide for treating heart failure and arrhythmias. These herbs help strengthen the heartbeat and normalize its rate. Foxglove is the source of the widely used medication digoxin, which contains stimulating digitalis glycosides. However, herbal remedies nurture the heart in deeper ways as well. The cardiovascular tonics offer a range of remedies uniquely suited for treating problems of the heart and blood vessels. While they cannot boast the dramatic, rapid, often lifesaving effects of many of the synthetic drugs on the market today, they have a definite advantage in addressing the chronic degenerative conditions often found among people as they age.

Hypertension
There are more than thirty-five million hypertensives in the United States. Twice as many African Americans as Caucasians are afflicted, but the reasons for this are not understood. A common problem in our culture, hypertension (or high blood pressure) is rare in cultures that are relatively untouched by the Western lifestyle. Lifestyle plays a major role in causing and maintaining hypertension. Dietary, psychological, and social factors must all be addressed for any real change to occur.

Hypertension is typically free of symptoms until complications arise. The symptoms associated with the condition can be caused by other problems as well and include dizziness, flushed face, headache, fatigue, nosebleed, and nervousness. Observable changes in retinal blood vessels are diagnostic indicators of the degree of damage caused to the body by hypertension. Diagnosis includes finding that both systolic and diastolic blood pressure are usually, but not always, higher than normal; other causes must be excluded. Hypertension is considered to be shown by a blood pressure reading of greater than 140/90, but “normal” must be considered as a range rather than as one specific figure for the whole population.

Temporary increase in blood pressure is a common and normal response to the ups and downs of life. Sustained hypertension is caused by increased peripheral vascular resistance. This is initiated by increased arteriolar tone and leads to the damaging structural changes of arteriosclerosis.

A number of herbs have a reputation as being specific for hypertension, usually because of their impact on one or another of the processes involved in the condition’s development. The hypotensives, remedies that have been found by generations of herbalists to reduce elevated blood pressure, fit this description. The most important such plant remedy known to Western medicine is hawthorn, but there are many more. Included here is a partial list:

Each of these hypotensives has other effects that are known as secondary actions; thus the herbalist can select remedies that address the individual’s range of needs, not merely the hypertension. Following is a selection of safe and effective hypotensives grouped by their other actions.

Where hypertension is associated with water retention, more emphasis will be placed upon the diuretic herbs listed above; where stress is a major factor, consider the adaptogens and nervines, and so forth. Here is a safe and effective sample combination that will gradually normalize the blood pressure:

The ingredients in this mixture are all hypotensives but also offer a well-rounded range of relevant secondary actions. Hawthorn is also an excellent cardiac tonic and thus plays a fundamental role in strengthening and toning the whole cardiovascular system. Diuretics such as yarrow help remove any excessive buildup of water in the body and overcome any decrease in renal blood flow that may accompany the hypertension. Peripheral vasodilators will lessen high resistance within the peripheral blood vessels, thus increasing the total volume of the system and so lowering the pressure within it. The nervines valerian, linden, and cramp bark address any tension and anxiety present. Antispasmodics will ease peripheral resistance to blood flow by gently relaxing both the muscles that the vessels pass through and the muscular coat of the vessels themselves. Cramp bark is probably the most effective and safe of these herbs; valerian is a second.

Other plants might be added as well, depending upon the individual’s specific symptom picture. For example, if palpitations are present, add motherwort. If stress is a factor, increase the nervine content and possibly include an adaptogen. An alternative prescription for hypertension with stress as a major factor might be the following:

Another example might take into account heart palpitations (tachycardia). If the cause of the palpitations is not heart disease as such, a prescription for hypertension with palpitations might be the following:

David Hoffmann, FNIMH, AHG, has been a clinical medical herbalist since 1979. A Fellow of Britain’s National Institute of Medical Herbalists, he is one of the founding members of the American Herbalists Guild and the author of 17 books, including Herbs for Healthy Aging, Medical Herbalism, The Complete Illustrated Holistic Herbal, and The Herbal Handbook. He teaches herbal medicine throughout the English-speaking world and lives in California.

“Medical statistics clearly show that Americans are the most heavily medicated people in the world. In spite of this (or possibly because of this) we rank far below many other first world countries in life expectancy and far above in cancer rates, levels of obesity, and many other chronic degenerative diseases.

As our population ages many more people are realizing that in order to stay healthy into old age we need to become proactive, improving our diets and lifestyle choices, reducing stress, and becoming more knowledgeable about our health and medicine. One way we can help to prevent disease and enhance wellness is the intelligent use of herbs.

Because few Americans grew up using plants as medicine, educating oneself as to their safe and rational use is essential. With so many books, websites, and magazines publishing information on herbs and natural health, how does one discern accurate information from the fraudulent? One answer is David Hoffmann’s new book, Herbs for Healthy Aging.

Hoffmann is one of the Western world’s most respected clinical herbalists, and he offers the reader safe, effective, and relevant treatments for many of the ills that come with increasing age. If you want to prevent senior moments, menopausal symptoms, prostatic enlargement, and circulatory problems, some of the answers you are seeking can be found within these pages.”

“Herbal medicine can be as simple as brewing a pot of tea. However, knowing which herbs to use and how to use them requires experience, which Hoffmann amply provides. Herbs for Healthy Aging gives authoritative answers to most of the commonly asked questions about when and how to use herbs medicinally.”

“Herbs for Healthy Aging is an invaluable resource.”

“…Herbs for Healthy Aging is an invaluable resource.”

By David Hoffmann
LIST PRICE £16.99
PRICE MAY VARY BY RETAILER