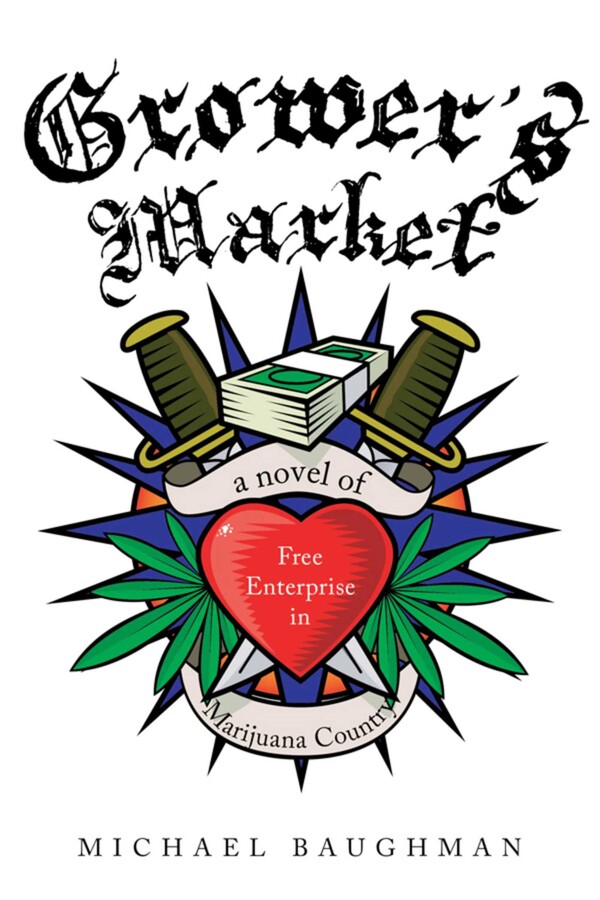 A Novel of Free Enterprise in Marijuana Country

Growers Market is set in remote marijuana country peopled with characters whose backgrounds are diverse and whose futures are uncertain. Sunbeam, who entered adult life as a 1960s San Francisco hippie girl, moved north searching for peace and quiet in unspoiled nature. Eventually she ended up running The Bird of Prey Tavern and growing enough weed to support her tranquil life. The men who eventually work for her  Shadow, Shrimp, Stones, Toon, Shakespeare  are combat veterans searching for some of the same things Sunbeam found. A Vietnam vet named Case, a widower, is Sunbeam’s neighbor. Living on the top floor of the tavern is Rainbow, a runaway from Texas, who tends bar and nurses her husband, a quadriplegic known as Uncle Sam.
Shadow and Shrimp plan to take the money they’ve earned growing weed and open a restaurant. Shakespeare is hard at work on a novel about a hero named Superpenis, modeled after the cartoon character Plastic Man, and a New York publisher is interested. The heavily tattooed Toon sees himself as a living visual symbol of a world gone mad, and Stones has fallen in love with a virtual stranger at a homeless shelter.
But now in the second decade of the 21st century new people have arrived to claim space in the quiet valleys, next to the clear-flowing creeks, along the green mountainsides. They are large-scale growers, armed gangs, corrupt cops and drug cartels, and violence and death come with them. Shadow, Shrimp, Shakespeare, Toon, and Stones must defend their turf against more heavily armed men who don't mind declaring war to claim this marijuana country as their own.

Michael Baughman was born in Buffalo and raised in western Pennsylvania and Hawaii. After college, he served in the US Army in Germany, after which he returned to teach and write. He is the author of seven books. Baughman lives in Ashland, Oregon, with his wife of fifty years, children, and grandchildren.

A Novel of Free Enterprise in Marijuana Country