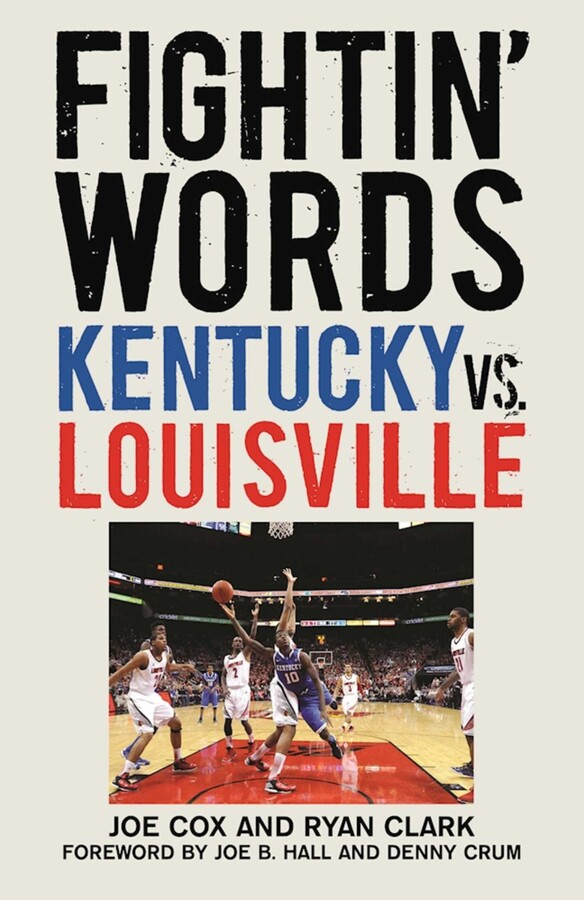 By Joe Cox and Ryan Clark
Foreword by Joe B. Hall and Denny Crum
LIST PRICE £12.99
PRICE MAY VARY BY RETAILER

The long-standing rivalry between the Kentucky Wildcats and the Louisville Cardinals is one of the most heated in college basketball. Facing off against each other on the court for over a century, the intrastate rivalry became red-hot over thirty years ago when the two faced each other in 1983 NCAA tournament, and Louisville narrowly edged out the Wildcats to advance to the Elite Eight. The heat hasn’t died down since ’83; in fact, the animosity between the two has only gotten stronger, with numerous face-offsboth on and off the court. In Fightin’ Words, Joe Cox and Ryan Clark expertly narrate the blow-by-blows of all the most important moments in the history of the Kentucky-Louisville rivalry.

Fightin’ Words, first published in 2014 and now newly updated in paperback, covers the hundred-plus year span of the feud. From the twelve games played prior to the fated 1983 meeting, to the Wildcat-Cardinal meet-up in the Final Four round of 2014 NCAA tournament, and every game in between through the 2014-15 season, all the games covered include insightful pregame evaluation, commentary on the games’ most important plays, and expert postgame analysis, along with interviews from key players. From off the court, read how Louisville coach Denny Crum craftily out-recruited Kentucky coach Joe Hall or the athletes in inner-city Louisville; discover a blow-by-blow of Hall of Fame coach Rick Pitino’s move from the Wildcats to the Cardinals; and learn how John Calipari transformed a losing Kentucky team into NCAA Champions. With individual chapters chronicling every meet-up, Fightin’ Words is a must-have for every true fan of college basketball.

By Joe Cox and Ryan Clark
Foreword by Joe B. Hall and Denny Crum
LIST PRICE £12.99
PRICE MAY VARY BY RETAILER