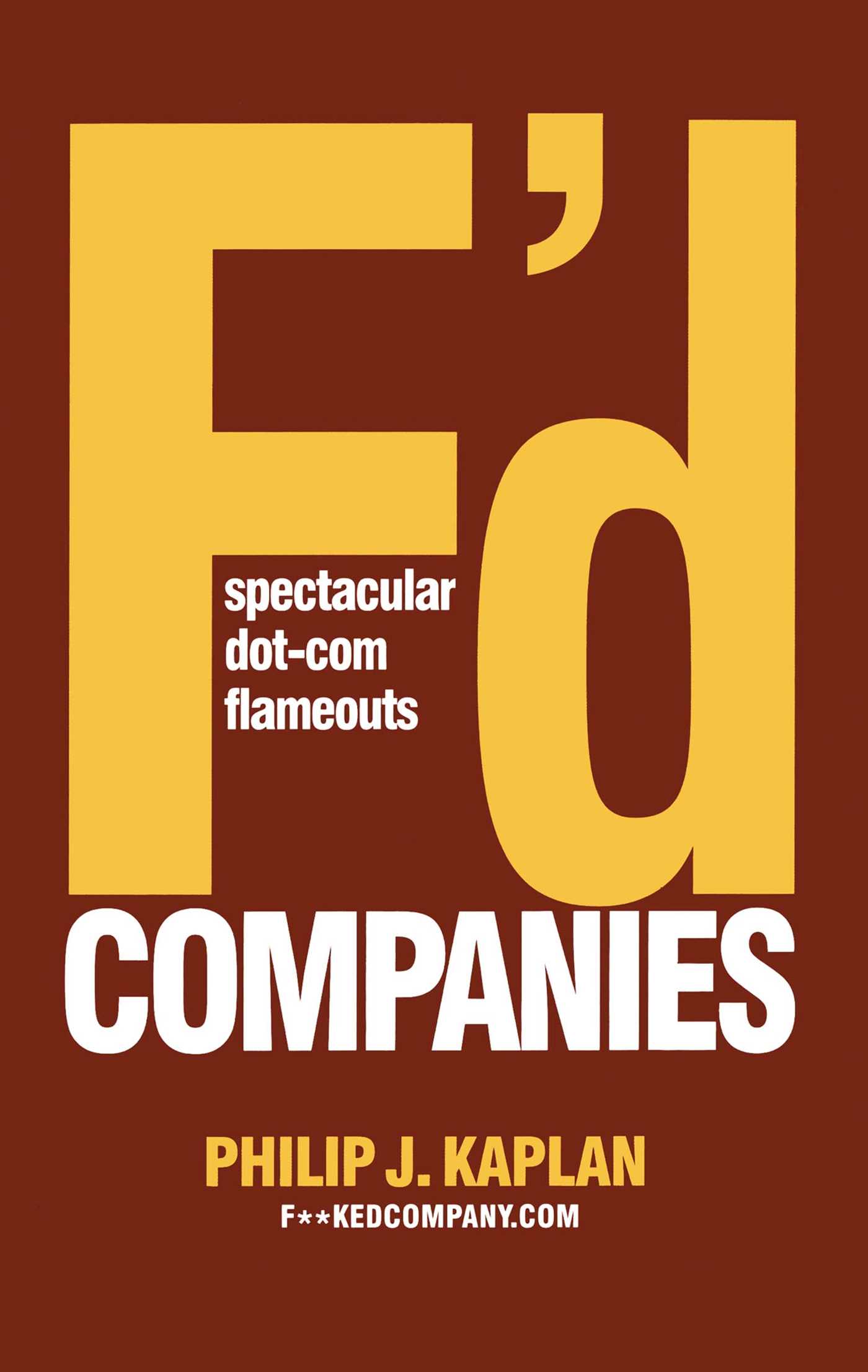 Not long ago, the world was awash with venture capital in search of the next Yahoo! or Amazon.com. No product, no experience, no technology, no business plan -- no problem. You could still get $40 million from investors to start up your dot-com. And you could get people to work around the clock for stock options and the promise of millions. Then, around April 2000, it all came crashing down.


F'd Companies captures the waste, greed, and human stupidity of more than 100 dot-com companies. Written in Philip J. Kaplan's popular, cynical style, these profiles are filled with colorful anecdotes, factoids, and information unavailable anywhere else. Together they form a gleeful encyclopedia of how not to run a business. They also capture a truly remarkable period of history.

F'd Companies is required reading for everyone involved in the "new economy" -- assuming your severance check can cover the cost.
Chapter One: Tough Ship

I'm out of dog food and my cat's box needs new litter. I know what I'll do: I'll order Dog Chow and Fresh Step online from a sock puppet and then I'll watch the dog starve and the cat shit all over the house while I wait for it to be delivered!

Waiting was just part of the problem. Pets.com assumed, probably correctly, that many potential customers would be turned away by high shipping costs. So...they only charged $5 shipping for a standard 40-lb. bag of pet food, when actual shipping costs were at least twice that. Similarly, small items like a $2.50 dog bone weren't worth shipping.

Amazon.com, one of Pets.com's major backers, thought they could use their muscle to make Pets.com succeed. Instead, they managed to blow through over $100 million with the help of brilliant purchases such as a $2 million Super Bowl ad and a float in the Macy's Thanksgiving Day Parade. Other investors included the infamous venture capital firms Idealab and Hummer Winblad -- the same butt-plugs who brought us Rivals.com, Gazoontite.com, and TheKnot.com.

They should have sold actual pets and shipped them UPS -- better margins...

Look, I'm the laziest fucker on Earth. I buy tons of shit online, but I still go to the supermarket to buy my food. Although there have been times when I've fantasized about ordering from Webvan just to watch some poor sap unload my groceries while I sit there, watching TV and drinking a beer...

Uhh...okay so raising and burning through more than $1 BILLION (that's billion with a "B"), the online grocer Webvan gained notoriety as being one of the biggest dot-com failures of 'em all.

The grocery business is a penny operation. Margins are razor thin. The most successful grocery retailers are big chains that buy in bulk, sometimes directly from the manufacturer. Webvan just didn't have the buying power, infrastructure, or demand to compete.

Simply put, Webvan was a classic example of PAYING more for products than they were SELLING them for. There's really not much more to it.

One of the more interesting chapters in the Webvan story has to do with their president, George Shaheen. Shaheen was CEO of Andersen Consulting until the end of October 1999. At the time, companies like Andersen Consulting (now known as Accenture, pronounced "Ass-ENTER") had serious problems with employees leaving in droves to go work for COOL HIP Internet-dot-com-cyber-virtual-e-companies.

So...after trying to convince Andersen employees that it was a bad idea to leave and that dot-coms are stupid, THEIR OWN FUCKIN CEO QUITS to join Webvan. About eighteen months later, after realizing Webvan's bleak future (you didn't need a crystal ball...), he quit.

Kozmo.com, king of the single-movie-rental-messengered-to-your-door-with-no-tipping, decided a little too late to require a minimum order.

If Kozmo were really such a good idea in the first place, Domino's would have been a $500 billion company ten years ago...Pizza delivery places make money cuz they make a pizza for $1 and sell it for $12. Hand-delivering pints of Ben & Jerry's just ain't the same.

Funny thing is that pretty much EVERY FUCKING STORE in New York City manages to accomplish home delivery without burning through $250 million.

After spending $2.5 million on their domain name, Furniture.com discovered that UPS wouldn't ship bulky items like sofas and tables, and they were forced to use more expensive shipping alternatives.

"There were many cases when we would get an order for a $200 end table and then spend $300 to ship it. We never could figure it out," one former Furniture.com engineer told CNET's News.com.

Another problem that hit Furniture.com was that some of the small furniture manufacturers they used couldn't keep up with the volume of orders, causing long shipping delays.

The Better Business Bureau in Worcester, Massachusetts, received over forty complaints about the furniture retailer in just two months. "This is an extraordinary number of complaints," said Barbara Sinnott, president of the local BBB, to The Boston Globe. "It makes me alarmed."

In total, $75 million was invested into this company. $27 million of it was last-minute venture capital reportedly swindled from investors by taking them on a tour of the facilities while having accountants and engineers pose as busy customer-service representatives, talking to imaginary customers on dead phone lines.

According to Furniture.com's IPO filing -- a public offering that never happened -- they lost $46.5 million in 1999 alone.

Philip Kaplan is the president of PK Interactive, an e-commerce solutions firm. He lives in New York City and can be seen playing drums in smoky heavy metal clubs around town.